Now Cliff already talked about it in his match report, but last Sunday was Deano's last game in the Blue and White. And what an emotional experience it was. The man himself had a blinder, saving us from a relegation dogfight in the last round. Quite a ways from the NSL glory days, or even two years ago where he lifted the premiership cup, but inspirational stuff nonetheless. 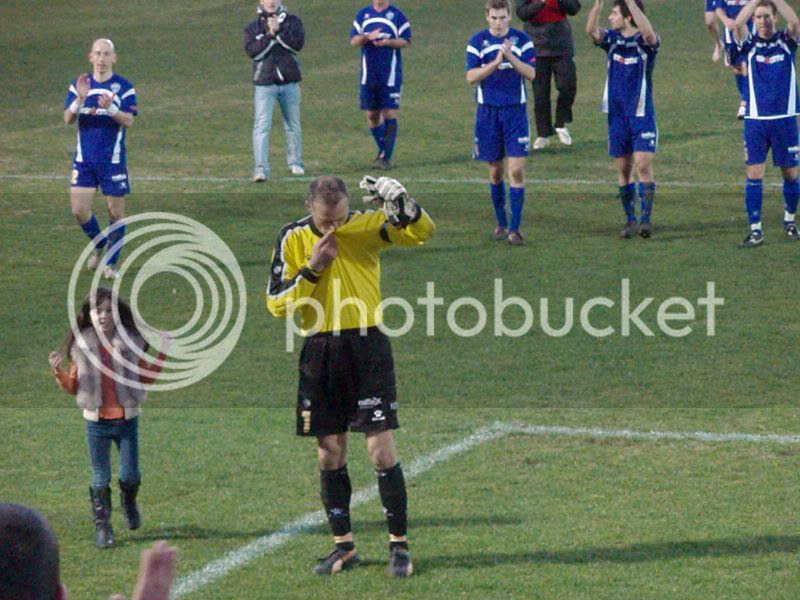 This is what's it's all about people. Later a small ceremony was held in the social club, where Deano got to have his say, and even brother Johnny got to share the limelight as well, with a lovely little video sequence was played on the big screen showing some of Deano's classic saves, scoring in a penalty shoot out in the old NSL can't have draws days, holding the VPL trophy aloft with his brother. Which leads me to my next point. Johnny A could have easily been left out, or felt marginalised, but two little acts showed that some in the club don't want to burn bridges. First was straight after the game, with our former coach waiting outside the changerooms entrance, almost seeming a little unsure... until one George Koukoulas invited him in... later on that same courtesy for a long time and magnificent servant of our club was initiated by George Triantos. Lovely, small gestures which say a lot.
Posted by Paul at 20.8.08