Harry Sawyer - the likely winner of South Melbourne's 2020 golden boot award, for whatever that's worth this year - has signed up with Gold Coast Knights for rest of the season. The move has been described by Gold Coast Knights' social media outlets as a loan move - though I am unaware if Sawyer was signed to South for 2020 and 2021, so who knows what such a loan move actually means for Harry's future at Lakeside. Then again, who knows what the future holds for anything anymore.
Posted by Paul at 31.7.20 1 comment:

Having spent over a decade at a western suburbs university full of self-doubting weirdos, I'm well aware of the idea of "impostor syndrome" - but the creator of this minor masterpiece being critical of their work is a bit too much.

I mean, if I had anywhere near the cake design skill of our friend here, would I have spent the past 13 years blogging about soccer?

I'll play them if I have the chance - usually by being the stingy sort and just borrowing it from the local library - but I'm not a big enough fan of modern soccer video games to go out and buy my own copy. But I know some of you are, and you've probably already seen this making the rounds. 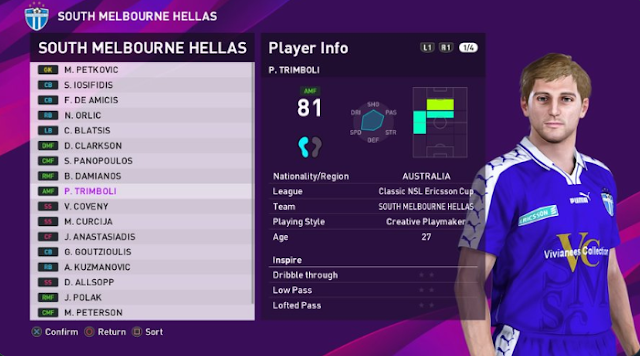 Someone has gone out of their way to apparently try and re-create the glory days of Australian soccer for play on the latest Pro Evo game - and by glory days, I guess this means the National Soccer League circa-1998. And who of us could argue? Though like Billy Natsioulas, one does have to query whether they got Trimmers' speed stats right. They also misspell the sponsor's name, bit that's neither here nor there really. Seeing how they no longer exist, Viviannes Collection is hardly going to issue a cease and desist anyway.

I assume those of you who bother with such things know how to download and make the option file work.
Posted by Paul at 23.7.20 No comments:

As reported by the club's media avenues, visa player Stephen Folan is returning to Ireland.

With the 2020 senior men's season now cancelled, our Irish recruit Stephen Folan has decided to return home with his wife.

We would wish Stephen all the best for the future and thank him for all his efforts in his short time with the club. pic.twitter.com/IfQrkBC8l4
— South Melbourne FC (@smfc) July 22, 2020

So, that's it for senior men's or women's soccer in the mainline metropolitan competitions for 2020.

While Football Victoria and a select few clubs who believed in their (given by who knows) mandate of football heaven that they must try and play through a pandemic, the pandemic has ultimately won.

But only for now. Because even as there appears to be no end in sight to the pandemic easing in Victoria to such a point where we might conceivably see local soccer return this year, still the dreamers of dreams are going to try and find a way to get any sort of soccer played in what remains of this awful year.

At the moment that seems to be mostly around getting junior competitions completed under some modified format, because won't someone think of the children and all that. Or won't someone think of a governing body that would hate to have to refund a ton of money back to clubs who would, in theory at least, return those fees back to those who put the money in the food chain in the first place.

And while sporting body budgets are always erratic things prone to mild swings of boom and bust, and belt tightening and free spending, having no competitions and therefore no fees coming into your coffers for a whole year would be hard to deal with for any governing body. And even if there was some kind of government bailout to cover your arse for this situation, it might not yet be enough.

As it is, Football Victoria is looking to try and organise cobbled together tournaments of some sort for the spring and summer, for what purpose other than trying to claim some of their soon-to-be missing fees (assuming they don't keep the fees of those that choose not to play in of these proposed tournaments).

As it is, I would like to be able to say that I can write up a season review now, but since there might be some sort of South related action yet in 2020, I'll guess I'll just pad out the weeks with other crap until such time as everyone gives up on trying to get anything going this year.
Posted by Paul at 13.7.20 2 comments: