The Laurie Schwab and Les Shorrock collections at Deakin

Today I traveled down with Ian Syson to Deakin University's Waterfront campus to be shown around the Les Shorrock and Laurie Schwab collections by Roy Hay. This was part of work being done with the FFV's historical committee, which I'm now a part of, as well as part of work which may help South related historical research.

The collection of photographs and other materials is quite substantial. Most of these photos are in black and white, and date from the 1970s onwards. They are arranged in some sort of alphabetical order, but they are not indexed in any way. Therefore one may find, as we did, a photo of John Kosmina grabbing an opponent by the throat (A-League supporters may note some sort of irony there), but with no identification of said opponent. Still, those obstacles can be overcome by cross referencing with other materials.

More problematic are the complex copyright and ownership rights, which make it difficult for the general soccer public to access and utilise this treasure trove for its own efforts at historical preservation and education. There are few digitised elements of these collections, and unless the ownership and related preservation issues are resolved, the usefulness of the archives may well be restricted to those in academic circles, who can make use of the rules allowing access and creation  of duplicates for research purposes.

Hopefully a mutually beneficial solution can be found.
Posted by Paul at 30.11.11 2 comments:

You can view it here. A section for only our fixtures will be created on this blog some time this weekend.

First up, home again, home again, jiggidy jig, against newly promoted Generic Black and White Italian Backed Team, with a few of our exes playing there. Of course again we play Oakleigh away in the first half of the season. No ANZAC Day Cup nonsense against Hume. And a final round trip to Olympic Village. No sign of the mooted inclusion of the Heart and Victory youth teams, nor of the NTC/VTC.

Before we go, kudos to the FFV PR person for their sense of humour on their media release.

It’s the always popular battle of the Greens when defending champions Green Gully Cavaliers travel to Kingston Heath to take on Bentleigh Greens.

If you have the FIFA 12 game for xbox, ps3 or pc, you can also play as South Melbourne - albeit only in exhibition matches, online friendlies and user-created tournaments.

To access this service, you have to visit the FIFA 12 site, sign in, and select the 'Creation Centre' under the 'Play Now' tab. You then do a search for South Melbourne, where you should be taken to a section where there are several South Melbourne sides available, including one by our old friend Cliff. Select the one you want, and bookmark it. When you next connect online to your game on your console, select 'Creation Centre' and download the teams.

There are also other former National Soccer League teams, including extensive if arbitrary selections by users named 'NSL Warrior' and Australian soccer forum veteran ZimzuM - Parramatta Melita Eagles have a team, but their Maltese cousins Sunshine George Cross do not. Add the of course already in Perth Glory to the list, as well as several random teams - yes, there's an Inter Monaro team available to download - and you can go back to the hazy, crazy days of the NSL in your own self made tournament, albeit with completely unrealistic crowds.

Another side of the unrealistic nature of this scenario is that the teams tend to be greatly overpowered, being mostly in the range of 4 1/2 stars, which I suppose helps you play against people who insist on using Barcelona, Manchester United etc. One wonders why people insist on full licensing when 3/4 of the online crowd pick the usual teams.

I suppose it doesn't matter - what counts is that there's people out there having a go at some sort of tailoring this game, and South of the Border is proud to promote these people's initiative.
Posted by Paul at 21.11.11 6 comments:

I'm allegedly busy with trying to complete my honours thesis, which is due next Friday. In the meantime, this blog will hopefully be very quiet. Here's something to tide you over for a little bit longer. So allegedly busy I didn't even bother editing out all the stuff like the browser tabs. 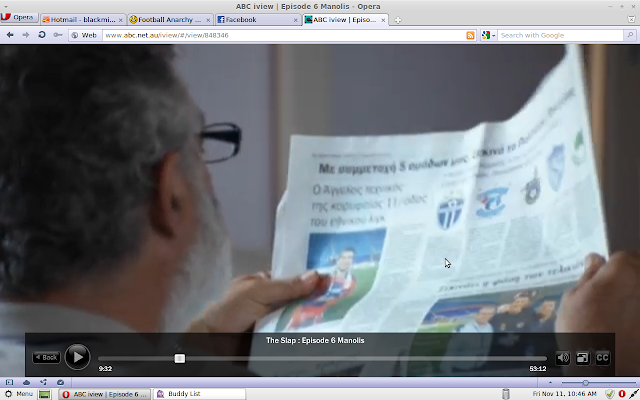 Seeing as it's one week into November already, and there needs to be a certain amount of notice given to the members, one wonders when and where it's going to happen. Anyone?
Posted by Paul at 8.11.11 1 comment:

The Pig is in the Poke

Seems as if I'm now on the FFV's history committee. I'm pretending that I'm not sure how that happened.
Posted by Paul at 7.11.11 No comments:

Time for a change, perhaps

Have had this layout for a long time now. Colours, fonts and widths have changed, but the basics have remained the same. Not a huge fan of the new dynamic templates, but chances are I'll be switching to one of them soon enough. Will look a little less cluttered I hope, even if some of the functionality (ie, long list of labels) bites the dust. So don't freak out if it all comes up looking a little different some time soon.
Posted by Paul at 2.11.11 2 comments: