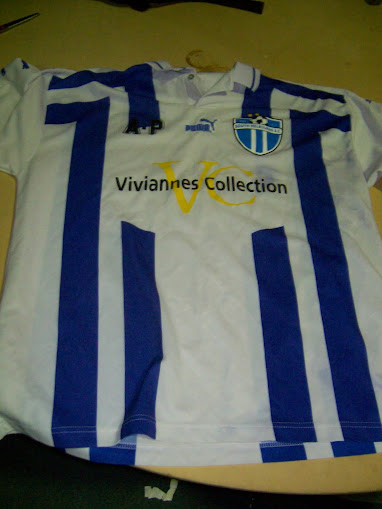 There's a social media account that's been posting their collection of South Melbourne Hellas jerseys o social media - notably on Twitter (here) and on Facebook groups like Australian Football Memorabilia.
(Just as an aside, and I know I've mentioned this on one of the episodes of the history podcast, but whoever decided to change the name of the game in Australia from "soccer" to "football" has made the work of Australian soccer historians and researchers infinitely more difficult).
Most of the jersey uploader's jerseys seem to be of a comparatively recent vintage - think mid-1990s onwards - and that'd be no surprise, as they're by far the easiest ones to get. I mean, good luck prising a Marathon Foods era jersey out of someone's cold, dead hands.
And as for a Montague Smash Repairs jersey (supposedly the thinking man's South Melbourne Hellas top) or anything before that, forget about it. That stuff is gone, and probably the only people who have those things have them locked in a vault, or have no clue of their value or importance of such an item, even as it's right in front of their face as I'm saying this, waggling back and forth, perhaps being help up by a loved one.
Nevertheless there are some rare gems in our collector friend's collection, such as this training kit, and this General Diagnostic Laboratories kit before the company's botched pap smear tests saw the firm re-brand as GDL, and the kits changed accordingly. At any rate, the whole affair has prompted me to dig out this photo of what I assume is Ange Postecoglou's training kit jersey from the late 1990s, which I found when I was cleaning out the old social club many, many years ago now. Strange what survives and what doesn't.
Posted by Paul at 30.9.20 No comments:

Got informed of this last week, so forgiveness for the late post. South midfielder Daniel Clark has popped up in Queensland, plying his trade for NPLQ side Peninsula Power for the rest of the year.

South of the Border awards 2020

Earlier this week I put away my heavy winter coat, after having taken out my 2020 media pass from the inside pocket, because at some point everyone - even disinterested bloggers - has just got to admit defeat on there being any more soccer being played this year.

Which, to be fair, I think I'd already done long ago, but it seems like we're getting close to Football Victoria releasing its fee refund policy, if they haven't already - which means that South Melbourne will be one step closer to finalising its own refund policy.

That of course doesn't affect me in any way - I'm no player, nor do I have any children playing. And as for a membership refund? I think I got my $200 worth of miserableness this year, even if we only got two home games. But now to my annual awards, not that anyone deserves anything for this season.

Under 21 player of the year: The Cliff Hussey Memorial Trophy goes to Matthew Loutrakis.

Best performance: Eastern Lions at home. Because we won.

Best away game: Oakleigh away. Every away game sucked, but they were our toughest opponents, and we didn't lose, so let's go with that.

Call of the year: Something said by someone about the noted South Melbourne identity "Greeksta", about him having never read a book in his life or some such. Which was a terrible lie, because Greeksta was able to expound at some length on my cameo appearance and other matters in Joe Gorman's The Death and Life of Australian Soccer.

Chant of the year: I honestly can't remember anything worthwhile on this front.

Best pre-match/after match dinner location: Gains will have to remind me if we went to Thai deli before the Port game, because the experiences of the Indonesian joint (Oakleigh) and the hole in the wall Burmese place in Sunshine (Altona game) were underwhelming in their own way. I regret not getting an ice cream on the way back to Sunshine station now.

Friends we lost along the way: Not so much lost as misplaced, but thanks to COVID19, pretty much everybody. Yes you can see and interact with a good deal with the usual suspects on the old socials, but it's just not the same.

Barely related to anything stupidity highlight of the year: The one silver lining in this dumpster fire of a year is that it didn't last long enough for us to get dragged into a relegation battle.