Dinosaur relic of a bygone age

The year was 2000. I'd transferred from my rundown community run after hours Greek language school - which I once described in a short essay as looking as if it'd been hit by NATO, much to the amusement of my classmates and the Greek consulate dude who was present, whom I reckon my teacher back then was in love with, but that's another story - to Omiros College's Altona North branch, which was, ironically located at my high school's year 7-10 campus, which I'd departed the year before. Both re-locations to do with VCE and what not.

The people there were friendly enough, and they tried occasionally to include me in their social/recess groups, but it was never going to work out. I was a clichéd angry misfit and they were clichéd happy wogs. They would discuss nightclubs and bars (even with the teacher, whom they would see out on weekends) and I would read Portrait of the Artist as a Young Man. It was never antagonistic at least, for the most part.

I was searching through my archives, clearing stuff out that I'd had in my drawers in some cases for probably 15 years. I've lost a couple of my school reports, notably my 2nd semester year 11 one where things started coming together for me somewhat. Amongst the rediscovered files was the extract below from my year 11 exam. I got 69/75, and was told not to rush so much. My handwriting was so much better than it is now. I wonder if they're still using South as a reference point in Greek schools. I would wager that they don't. Despite my solid marks, I did not pursue Greek at university level. Perhaps things would have been different for me if I had. 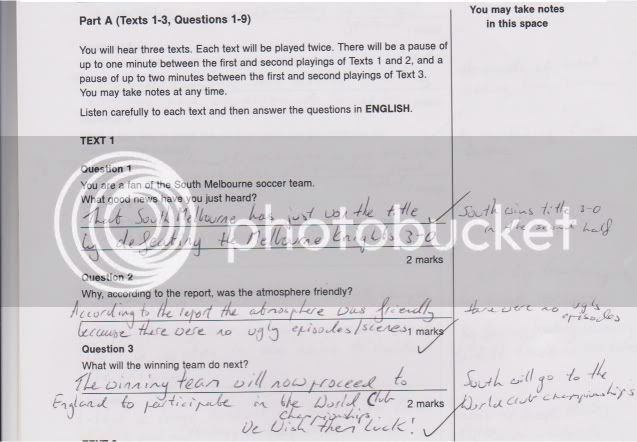 Help those ponces out at Sydney University by filling in this survey to do with Australian soccer supporter viewing and attendance habits.
Posted by Paul at 28.10.09 No comments:

I'm surprised to see it lasted this long

It's adios to this, thing, which I don't think anybody ever knew the purpose of.


TEAMelbourne would like to thank their valued supports, members, partners and sponsors for their support and commitment over the past three years.

TEAMelbourne has been placed into solvency and should you require any further assistance in the form of corporate hospitality or event management please contact the member clubs directly
Posted by Paul at 26.10.09 No comments:

Email ThisBlogThis!Share to TwitterShare to FacebookShare to Pinterest
Labels: 2007, TEAMelbourne

If you're really bored tonight

Completely irrelevant to all bar perhaps one reader - who'll be there anyway - the Victoria University student compiled annual creative arts journal Offset - of which I was the managing editor- is launching its ninth edition tonight at Readings in Carlton. 6:30pm start, $19.95 for a book and DVD, drinks and nibbles provided. I'll be making a quick speech, so if you're impressed by the words on here, you may want to come and hear me out loud. Or something.
Posted by Paul at 23.10.09 No comments:

Last part, continuing with Johnny A, confusion between SBS and channel 31, Ross Alatsas (credited as a journalist, which I suppose is true), in the kitchen very briefly with the Valkanis family, and a bit of the players singing their victory song after beating Altona Magic

Once again to Mildura Vasili, massive thanks for managing to upload as much as he did. Hopefully one day high quality copies are made available, with English subtilting (hell, I'd be happy to do it, if for no other reason than to get something worthwhile from 12 years of Greek school.)

Once again, thanks to Mildura Vasili.

In this segment (all in Greek), Mike Valkanis, Johnny A, Jimmy P and Ange P get extended chat time.

Here is the first part of the ERT documentary that has been uploaded online. Parts 2 and 3 are also online, but I'm posting the videos in different entries (and different days) to spread it out a bit. A massive thank you must go to Mildura Vasili for uploading as much as he could of the documentary onto youtube.

Unfortunately for our non-Greek speakers, it's mostly in Greek, with no English subtitles - but Jimmy Armstrong gets his fair share of talking time. Also included are Mike Valkanis, Ulysses Kokkinos, Takis Mantarakis, Jimmy Pyrgolios, Con Boutsianis, Manny Poulakakis and discussion on the late Ferenc Puskas.

I'm going to keep this fairly short and sweet.

Oman played quite well - and their style of play was quite attractive - but they really should have been a couple of goals down within 15 minutes. Their keeper was their best player.

I met up with Gains and got a text message from HellasJohnny; I waved to him from the bottom deck, and he waved to me from the top deck. Patty Kisnorbo didn't get a run, which was a shame.

I didn't think it'd be a great crowd, but even I was pleased/disappointed depending on my mood with the just over 20k figure. It says something, don't you think?

The stadium and its set up

This was my first time watching a soccer match at the Docklands (after I missed last year's Qatar game - see here why). They inexplicably - maybe plicably - left the roof open, which meant I got a little wet, but I didn't mind. I was behind the Coventry End goals, and the view wasn't the best, being so low and about 10 metres behind the goal, but it was ok for what it was. Makes you appreciate what we have at Lakeside, what we had at Middle Park, and what we will lose for the sake of our survival.
Posted by Paul at 15.10.09 1 comment:

SBS football commentator Paul Williams - lauded for winning SBS network a Logie for his coverage of a World Cup qualifying match - was found dead in his home at the weekend.

His body was found in his Sydney apartment.

Paul had suffered from chronic fatigue syndrome and severe depression since 2002 when the illness forced him to withdraw from regular work.

Fans remembered him as 'extremely knowledge' and dedicated to the game.

A fine journalist in his own right, Williams was an outstanding football commentator and he will long be remembered for his impeccable commentary, with the late Johnny Warren, on the historic Australia v Iran World Cup qualifier at the MCG in 1997, for which SBS won its first Logie.

After joining SBS for the 1993 World Youth Cup, he became the network's chief football commentator in 1996 commentating on the NSL, Socceroos games and events like Euro 96 and the 1998 World Cup in France In recent years, Williams anchored his own weekly radio show, Football Fever, on Sydney’s 2KY.


For whatever it's worth, I really liked Paul Williams' commentary style. While initially I found him irritating in his trying to imitate a British style, over the years he let go of that and found his own voice and style of presentation, and I and many others always found it odd in regards to what happened to him - especially from a Victorian perspective. Well, now we know I guess. Enjoy some of his and our finest work in this clip.

After many years of heading up to the Tracie McGovern Cup, a post-season women's football tournament held in New South Wales, the South Women finally managed to snare the major prize. The results are non-existent at the time of print on the tournament site, but nevertheless, congratulations to the girls for managing to win a pretty freaken big trophy. And good to see also that for once Casey Comets didn't take out first prize. 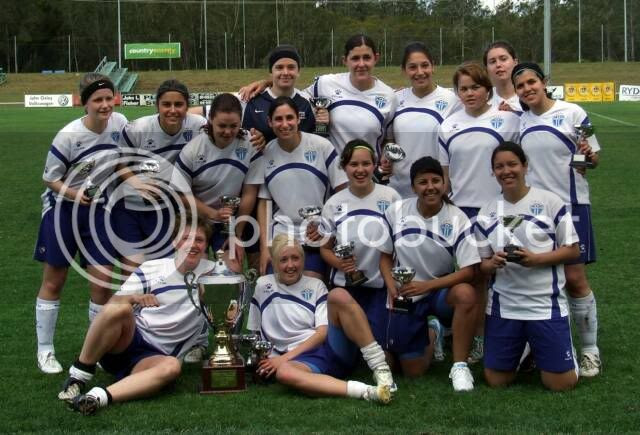 Coveny appointed as coach for 2010

They dawdled and delayed, but in the end the club decided to go for man considered as favourite for the task. I suppose this also means the end of Horsey's career - one which will not be remembered for any particular brilliance - even his highlights package is full of tidy finishes almost completely lacking in anything extraordimnary. A player best known for running in straight lines, hitting straight shots and often being used a sub during our glory days up front or on the wing.

And his longevity will not be appreciated in much the same way as that of other former greats. South is notorious for player turnover, but having played so much in the decline years means that Horsey will never get the mass appreciation he deserves. In many ways his career was one of accumulation and attrition - just hanging around for so long means that he will inevitably get some nice achievements - which for Vaughan include 2nd highest league goalscorer and 3rd highest games for South, and most games (64) and goals (28) for the All Whites (the games record is hanging by a thread - if Ivan Vicelich manages to play in both qualifiers against Bahrain he will overtake our man). The fact remains though, if he weren't a half decent player, he'd never have racked up that much game time in the first place.

Being the right man for the job is mostly about hindsight. Frank Arok built the nucleus of our last golden age team, but it's Ange Postecoglou who gets his name on the honour boards. Fernando's stellar 2006 season - 12 goals from midfield and who knows how many set up - carried that team, but John Anastasiadis as coach got his share of plaudits - and perhaps elevated his abilities in the public sphere to beyond those of the reality. Also left to the winds of hindsight are whether it was right to go for someone inxperienced in coaching as opposed to someone etsblished; someone from inside the club and close to much or some of the squad, as opposed to a clubman who has been away for a few years or a complete outsider.

It will be recalled by some that Horsey undertook AFC coaching licence exams during the season - causing him to miss three games - so at least you can see this is certainly something he has been thinking about a lot. On the other hand, much of the VPL is about grinding out results, not about pretty football - which is a problem at South, because the supporters also want something pleasing to the eye, the South tradtion being of attacking football and plenty of goals. David Lugli becomes Vaughan's assistant, after having taken the under 21s to their best finish in years. I wish them all the best of course - but a large part of that is also based upon them succeeding; their success will be the club's success; their failures, the club's also.
Posted by Paul at 7.10.09 No comments:

As reported, like, a few months ago, The Greek state run television network ERT produced a doco on South (and several other scummier clubs), and last Saturday night saw the South episode go to air. If I'd have known earlier, would have blogged it of course, but no matter, several people have taped it and people will get to see it eventually one way or another, I hope.
Posted by Paul at 5.10.09 No comments: