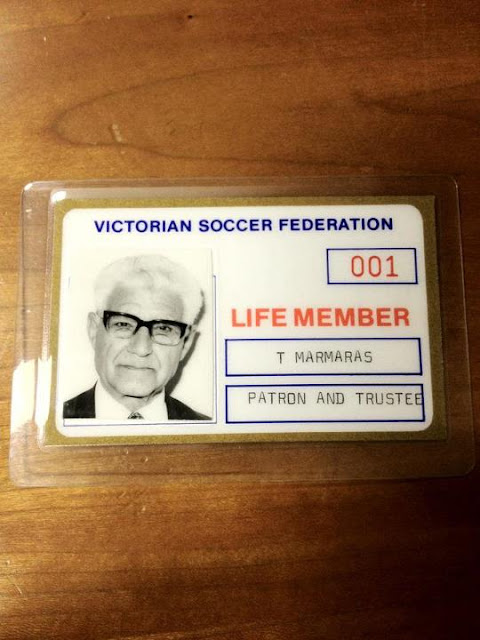 During a meeting last week of FFV's Historical Committee - of which I am a member - one item which came up pertained to merchandise ideas for FFV life members. That discussion deviated at one point to the problems of potentially numbering life member cards, especially considering the importation of life members from other footballing bodies when they amalgamated into FFV.

To that end I was reminded of this artefact, which I had mistakenly believed I had already uploaded to this blog. But here it is anyway, better late than never - founding South Melbourne Hellas president, and giant of Victorian and Australian soccer, Theor Marmaras, Victorian Soccer Federation Life Member No. 001.

I don't know what, if anything, was on the back of this card. If I had a photo of it, I can't find it now. Probably should have been a smidgen more thorough when going through the old social's stuff.
Posted by Paul at 26.10.16 No comments:

Army platoon leader, medical waste scavenger, currency trader, smuggler - even those who are vaguely familiar with the peripatetic footballing career of Aleksandar 'Alex' Duric are in for several surprises with this autobiography, Beyond Borders. For example, it's not until about halfway through the book's brisk 240 odd pages that we even get to the start of Duric's professional football career, when as a 23 year old he finds himself playing for semi-professional sides in the Hungarian third vision, while keeping a day job as a currency trader on the streets. 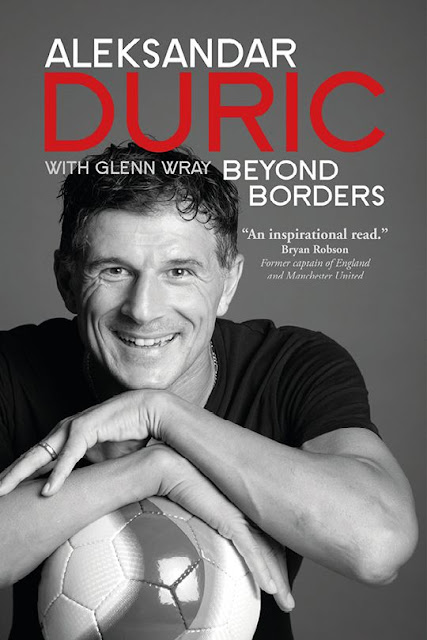 Before we get to that though, we spend a lot of time with Duric as he tells us about his childhood in the former Yugoslavia, in a poor, multi-ethnic village in what is now northern Bosnia and Herzegovina. To that end, the hard work required to remain at subsistence levels of survival and his brutal national service stint don't bother him much even in retrospect. More important is his father's alcoholism and violent behaviour, which exacerbates his family's poverty, and which drives a wedge between Duric and his father for decades.

But such things, as Duric readily admits, were common to many people in that part of the world. So, while one could be resentful of the sometimes petty differences in social class that existed in Yugoslavia - someone may have a slightly better pair of jeans because they lived in an urban centre - Duric prefers to focus on the benefits of life in the village.

While enjoying his football as did many Yugoslavs, Duric's main athletic pursuit was in canoeing and kayaking. This was a pursuit that he took seriously, becoming Yugoslav champion, and participating in world championship races. Later, in the ruins of Yugoslavia, Duric manages to hitchhike his way to Barcelona - without a canoe - to compete for the then fledgling nation of Bosnia and Herzegovina. This decision makes him a pariah at home, and he is forced to flee his homeland.

And thus Duric finds himself on the move, in one form or another for the next 15 years or so. From Hungary, to Sweden, back to Hungary, to Australia, China, Australia and Singapore, Duric's ultra-journeyman career means that, however brief his stays in certain places, his experiences in some of football's most obscure avenues is worth a look. And thus we see the shambles that was post-communism Hungarian football; the complicated mess of Australian domestic football during the 1990s; the embryonic stages of Chinese football, under funded and underwhelming in its lack of know-how; and most notably, the downward trajectory of Singaporean football even as a regional power.

While Duric knows that he can play the game, he is no grandstander - he knows his limitations, pushes himself towards those limits, and makes the most of every opportunity thrown at him. But he readily acknowledges that, even while he is pleased to be representing his new nation at age 37 and beyond, and to be dominating the league goal scoring charts on the domestic front, the fact the he does so reveals deep-seated problems with Singaporean football.

In terms of both diagnoses and solutions to Singaporean football's problems, Duric doesn't really offer anything new to the table - but that;s mostly because Singaporean football's problems are clear to see. A meddling, non-football understanding administration; a public fixated on overseas leagues, and on beating Malaysia; a culture, especially the Chinese culture, which does not value participation in sport; a city-state whose citizens are loyal - and thus able to support the national team with fervour - but who have no connection to local communities and the teams that allegedly seek to represent them (and the impossibility of foreign entities representing them).

So while Duric worries about the future of Singaporean football - after all, it has given him gainful and meaningful employment, and a place to call home - and throws out the vague idea that what was achieved in Australia with root and branch reform could be replicated in Singapore, he readily acknowledges that the likelihood of that change occurring is remote.

For those South fans interested in perhaps buying this book for some kind of insight into South Melbourne Hellas and Australian soccer at the time, Duric doesn't dwell too long on that. He covers how contact was made with then South coach Frank Arok, the immigration process, and the difficulties he had in adjusting to the fitness levels required. While generally positive about the standard of play at the time, Duric was not fond of the ethnic dimension of the game, especially the nationalist fanaticism of some the clubs, using one game away to Melbourne Knights as a key example. While Duric is absolutely right about the ridiculousness of the abuse and the nationalist fervour, he is also somewhat politically naive, something which is traceable back to the way he describes ethnic relations in his native Yugoslavia. While he's quick to emphasise the peaceful, multi-ethnic nature of Yugoslavia (or at least his experience of it), he has difficulty comprehending the speed at which things deteriorated.

Duric is not a very political beast (one could describe him as being culturally Yugoslav as opposed to politically Yugoslav), and thus he has no great grievance with the political system of the time - while he's not fond of the grinding poverty he and his fellow villagers endured, he is nostalgic for the social cohesion of the community despite its diverse ethnic makeup, something which he is easily able to appreciate in Singapore later on. It's hard not to see his life's trajectory further emphasising the merits of a multicultural society. From his early days in Yugoslavia, to his exile in Hungary, and later his settling down in Singapore, Duric makes sure to express his gratitude to those helped him in times of strife regardless, and at times in spite of their ethnic or religious backgrounds.

That sense of gratitude makes Beyond Borders a worthwhile read on its own. There is enough grief and hardship in this story to overwhelm even the most stoic of people, but Duric would rather focus on the positives; an interesting and successful career, the attainment of a loving family, and finding a place to call home.
Posted by Paul at 15.10.16 8 comments:

Prompted by a recent email by Mitty, one of our readers, it's about time we uploaded this particular series of items. As noted by Mitty in his email:


I got the Lakers plate from eBay. I messaged the seller and asked him if he had any other Hellas items for sale in which he said yes, 'club world championship plate'. Sounded interesting so I told him to post it to me.

I remember seeing many years ago a similar Lakers plate.

But the Brazil plate is very interesting particularly with the Tony customization. Perhaps this was originally made and purchased in Brazil by one of our traveling supporters.

I think that I've seen a Lakers plate like that before; indeed, perhaps one existed in the club's collection of artefacts. And while I'm not fond of the Lakers' logo (the name I'm not so fussed about; at least we have a lake next to us), the design as presented here looks great, modern and clean. 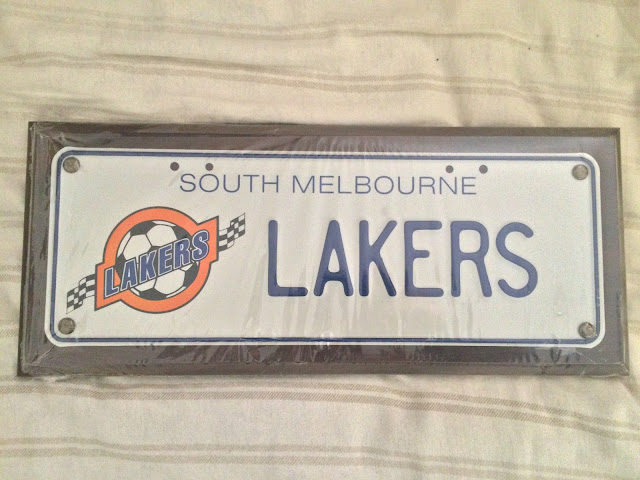 One assumes those Lakers plates were commissioned by the club. The first Brazil licence plate presented here however seems to bear out Mitty's contention of customisation, though I;m not sure of the full story. When compared to the second Brazil licence plate presented here, it's a different colour, has 'F.C.' instead of 'S.C.', has one assumes the original owner's name on it, and a love heart to boot. 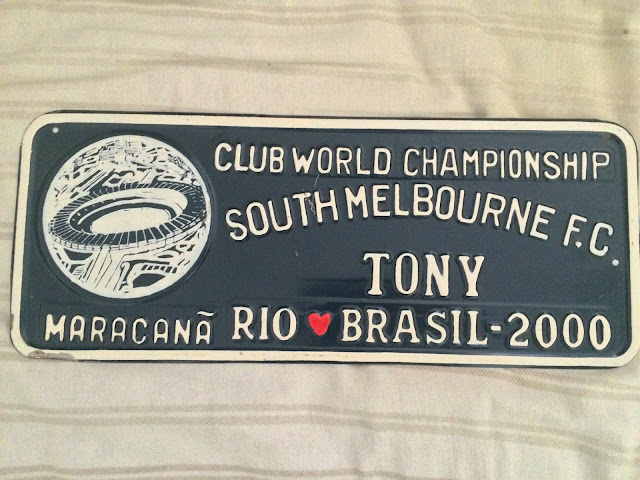 The last licence plate here was located in one of the glass cabinets in the old social club's museum space. At the time I was cleaning out and packing away items from the social club, I found that rather than being a unique item, that there were in fact several more of these in storage. The club may have ended up selling some or all the duplicates (about a half dozen if memory serves me correctly) of these from the merchandise booth after I re-found them. 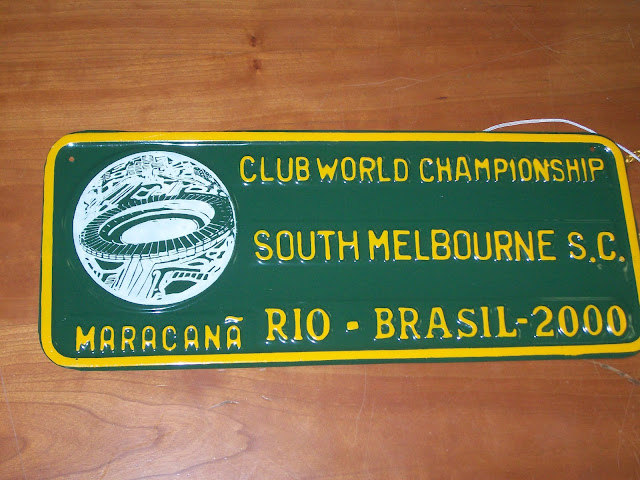 The existence of the second plate seems to suggest that the green plates were unofficial pieces of merchandise, but any information on the provenance of these items would be appreciated.

As an aside, I seem to recall a custom SMFC plate (SMFC50 perhaps?) being auctioned off, I think around the time of the club's 50th anniversary. There's probably other custom plates that people have actually attached to their vehicles, but the items presented here a more of a 'man cave' kind of item of course.

Thanks to Mitty for sending in the photos of the first two licence plates, it's very much appreciated.

Some local entrepreneur was hanging around the team hotel selling them, he would take orders one day then a couple of days later he'd arrive with the product, I think from memory they cost about 20 real each, 15 bucks back then. The green one I assume was from the same bloke but I never seen it before.