Sports fans will recall that despite being a massive soccer football fan for the last fifteen years, and having been sledged as a “wog” more than once for it, I’ve got no love for the new Australian national competition. For the last year we’ve had the same debate again and again - why South Melbourne should have been in it, why they shouldn’t have been etc.. Now on the verge of the new Victorian Premier League season, and our attractive clashes against world class sides like Richmond and Sunshine George Cross, the arguments have come up again. I’d like to say I’m over it, but sadly that would be a complete lie.

I think we’d be slightly less paranoid about it if the New Zealand and Central Coast teams weren’t in it. Everyone knows the NSL was a farce, and even if we don’t say it openly most of us will admit that the major markets needed a “broadbased” team to get people interested. The problem is that there’s only five major markets in Australia - and you can’t have a competition that’s just Melbourne vs Sydney vs Perth vs Adelaide vs Brisbane every week. So they forced a few experimental sides in there and are being rewarded with pathetic crowds for those teams. Relatively speaking the “big five” are doing well in crowd numbers (despite drops in Adelaide and Perth they’re still thrashing most of the NSL averages) but what are they going to do for the other three? Hang in and hope that some miracle is going to occur and suddenly all of New Zealand are going to start following their team? Their last gate was 1500. And what else can you do in a city like Newcastle? Either these people are going to go for it or they’re not. And at the moment they’re seriously lukewarm about the process. They pulled off 10k for a top of the table clash last night, but their crowd has been hovering around 5k all season.

The Brisbane Strikers of the NSL weren’t even close to an ‘ethnic’ team, and by the last days of the competition they found themselves with a thousand fans and rapidly losing money. All that says to me is that there was nothing you could do for the game in this country without decent coverage and media attention. Replace the Strikers with “Queensland Roar” this year and suddenly they’ve got 15000 fans from nowhere. Maybe South/Knights/Sydney Olympic/Marconi etc.. wouldn’t have grown to be the huge powerhouse clubs of a properly marketed and run competition but we sure as fuck would have contributed to it’s overall strength.

Personally I think that by pissing off Parramatta, Northern Spirit, Auckland, Brisbane, Wollongong and one of Marconi/Olympic/Syd U and introducing Victory, Sydney FC and Qld Roar it would have created a perfect balance. 3 teams in Sydney, 3 in Melbourne, one in the next three biggest markets and a relatively well established country side for a ten team competition. The people with a hard-on for “mainstream” teams get their wish, and the established “ethnic” clubs survive to play in a league where there’s no danger of any of the violence that everyone is so scared of.

But instead we get to watch a team from Gosford (current population, lest we forget, of 154,654) run around a stadium owned by a board member of the FFA in front of a couple of thousand people and are somehow expected to stand up and applaud this new leap forward? Fuck that for a joke. It’s painful to see it. To paraphrase the Timmy O’Toole charity song from the Simpsons

Well there’s a hole in my heart
As deep as a well
For another summer with no NSL
We can’t get in the A-League
So we’ll do the next best thing
Go on the net and WHINGE! WHINGE! WHINGE!

Loving you is easy ‘cos you’re beautiful

Ten months ago I stood in Adelaide’s Hindmarsh Stadium and saw a penalty hit the net that should, for all intents and purposes, have been the death of the South Melbourne Football (nee ‘Soccer’) Club. With no prospects of playing in the pumped up, corporate fantasy world of the new Australian national league the years of financial mismanagement and general apathy that surrounded the place collapsed in on top of the club and they ran very, VERY close to going out of business forever. It wasn’t until September/October last year that we knew for absolute certain that the club had been saved. The world’s greatest chairman was appointed and the task of rebuilding started. And today we saw the first step to regaining the glories of the past.

We stashed the official Reg Reagan “Bring Back The Biff” Holden whetever-the-fuck-it-is in my work carpark, unzipped my jacket so the t-shirt that was last worn on that fateful day in Adelaide was visible to all and set off for the now traditional Cricketers Club Hotel. Upon arrival it was clear that a star-studded cavalcade of the who’s who of South fans were in attendance. Just like old days. Almost enough to bring a tear to the eye. But not close enough. I was wearing the official Boutsianis Balaclava in dedication to our former midfielder, and armed robbery getaway driver, who turned his back on our club for roughly the 5th time and joined Heidelberg instead. It wouldn’t have been appropriate to shed a tear in such a fearsome disguise.

I did, however, see this redundant sign on the way, 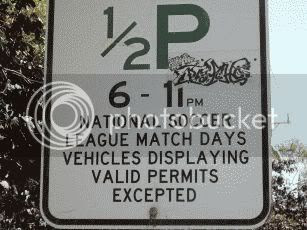 The poor bastards only changed it from “Ericson Cup matchdays” a year ago, presumably after somebody had rolled them in a challenge, and now the NSL gets killed as well. I predict they won’t know what to do. I also predict a riot when somebody gets booked for parking there during a Victorian Premier League game.

The pub action was awesome. It reminded me of why before every AFL season I start to think South are barging their way to the front of my sporting priorities. I’ve never met one person ever at a Melbourne game, I just don’t give a fuck. But here I was outside a pub with 30 people who I only knew because of South. That’s ace. The balaclava came off lest the people run that pub think I’m trying to knock-off their takings, Boutsianis style, but made a reappearance when the Heidelberg team bus got stuck in traffic right in front of us. What can you do? I danced around a bit. From on bus it was probably reminiscent of the dwarf doing a jig around Stonehenge in This Is Spinal Tap.

Eventually we got to the ground. South won the reserves/U21’s 2-1 in an encouraging sign. Even though I came in with ten minutes left and missed the winning goal. As the minutes before the game ticked on it because clear that there was a fucking huge crowd there. I mean huge. For Australian domestic soccer huge anyway.The official tally was 12000ish. Absolutely remarkable for a state league game. I don’t give a fuck if it’s an all-Greek derby, or if it’s the first game of a new season it was an amazing crowd anyway. It’s fair to say that I thought I’d never see anything like it at Bob Jane again. Especially in the days of June/July 2004 where the old trophies and memorabilia were being loaded into storage lest we fold and they get ransacked. Let’s hope that at least half of this crowd bother to come back for South vs St. Albans next week.

The game itself? If you’d offered me 0-0 pre-game I would have not only taken it but humped your leg at the same time - our pre-season form was so bad that even against a side promoted from the State League I was terrified of a first up loss. Looking back now, having just seen the game end 0-0 I want the three points. I feel robbed. The most experienced outfield player in our entire side, NZ international, Vaughan Coveny missed two sitters and we were all over the Bergers from the word go. Only for a few brief minutes did the opposition threaten to break the game open with a goal. Our elderly goalkeeper, and brother of coach, pulled out a couple of cracker saves that I honestly didn’t think he had left in him to deny them their best chances. I’m encouraged. Very encouraged.

Still shocked at the crowd. If that doesn’t get some positive press I will fucking go ape. Of course there’s more chance of the Herald Sun and Peter “F’ing” Desira taking a picture of the two of us in black balaclavas and writing a front page rant about 12000 right-wing Combat 18 fanatics hijacking the game in this country. And if they did that.. Insert random threats here. Of course there was a picture taken of us by one of the Greek newspaper photographers. It was only after he’d snapped off a couple of pix that I realised my t-shirt was in full view during the shots. If they just print those without even thinking - and god knows why they would because if you didn’t get the Boutsianis-related comedy aspect of it you’d think we were total lunatix or actual Neo Nazi’s - and I open Neos Kosmos to see a shot of myself in a black ski-mask with the word CUNT prominently displayed it will officially be the greatest day of my life. I’ll have it framed and put it on my wall.

Click here to see the power and force of the fence run when Boutsianis was taking a corner right in front of us. I was too nervous at 0-0 to join in sadly. And the steering wheel I planned on bringing didn’t eventuate so there was really no point when so many young and enthusiastic practioners of the art.

Not the best 0-0 draw I’ve ever seen (vs Perth, Australia Day 2004. Another huge crowd) but certainly the most emotional. I was so tense during that second half I could barely stand up, I fear that if we’d scored I may have just broken down on the spot.

I realised something the other day as I looked through my diary. Given that the ancient gods of scheduling have come together to ensure that work/South/Melbourne AFL don’t clash more than a few times during the next few months it means that I’m going to be at one sporting event or another one pretty much every weekend day I’ve got off until September. And then I go to England in October to watch more soccer. I think it’s fair to say that next cricket season I won’t even turn the TV on. I will start to understand why people hate sports.

Top night. Football is back. I still don’t get that sick feeling in my stomach for the whole game that I do when watching Melbourne play but the post-match tension is still there. I won’t sleep all night now.

If this game isn’t given massive coverage in the papers tomorrow then I’m going to ballistic. Fuck the A-League. South forever! Get all your asses down to Bob Jane next Sunday night against St. Albans.
Posted by Paul at 30.1.05 3 comments: