A few weeks back I received a message out of the blue from one Billy Natsioulas, asking if he could contribute to South of the Border. Of course I jumped at the opportunity, and within a couple of days, Nats had got the following piece to me. I kept it on the backburner for awhile, seeking to release it during the week we played the Knights, an appropriate choice I thought. Anyway, if like Nats you would like to send in a piece talking about your love affair with South, or a great game or favourite player, by all means send it this way. Hopefully the floodgates open and we get a whole heaps submissions from players and fans alike. But now over to Nats, and his story.

Hellas Mad
This isn’t some half arsed suck up job and by no means is it my autobiography. I just have a lot of time to think things through and understand whatever happened to my so called soccer ‘career’. While I was doing this I got an understanding where this love for the game began. My dad and brothers were 'Hellas Mad'. This piece is to analyse what made me Hellas Mad, a football lover and a South Melbourne player.

Every home game, my brother, my cousin and I would hop into the back of my dad’s old Corolla and make what seemed like a long journey to Middle Park. We always got there early and parked around 10 minutes away to make sure we got parking that was easy to get out of. I would tie on my Hellas headband thinking that I was so cool. I have three vivid memories of growing up as a Hellas supporter.

The Past
Firstly, the 1991 Grand Final – My dad and I had left a family christening early to watch the final 15 minutes of the game. My dad drove like a lunatic to get to Olympic Park on time and we ran up the stairs, only to realise we were watching the game from the Croatia fans' side of the ground. Nevertheless, we watched and we hoped for an equaliser. My dad thought it was over and in typical wog style we conceded defeat and left early to beat the traffic. As we got into the car we heard the roar, game must have been finished. It wasn’t until we got home that we realised that the roar was for a South equaliser and we miraculously won the championship on penalties. Even watching the replay we couldn’t understand how we won that shootout. 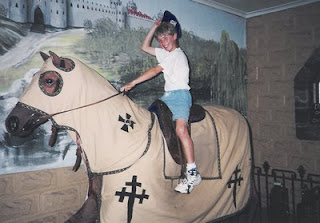 Secondly, a friendly around 1992 between the great Hellas and the suburban Oakleigh at their old ground at Caloola Reserve, allowed me the chance to meet my heroes. Mehmet Durakovic, sporting a plastered broken arm took me under his wing and introduced me to each player. I got all their autographs and was over the moon, but as soon as I got out of that room my older brother stole the autograph book and claimed it as his own… PRICK!

The final memory comes from March 1994, 11,000 people packed into Middle Park to see Hellas vs Croatia. Wadey missed a penalty in the 94th minute that would've given South the game. On the way out we were met by the Croatian fans who started rolling big stones at us from the top of the hill. My dad took us through the trees and snuck us under the fence to safety before finding his way through the crowd and meeting us on the other side.

My career and the present
Who would've thought that after 16 years of supporting South that I would play for their dire enemies, the Knights. Well, that’s where I ended up. Credit to them, they gave me every opportunity and treated me brilliantly. Funny thing was the best game I played for them we got thumped 5-0 against South and a 35 year old Paul Trimboli scored two and tore future Socceroos Roddy Vargas and Adrian Leijer to shreds. 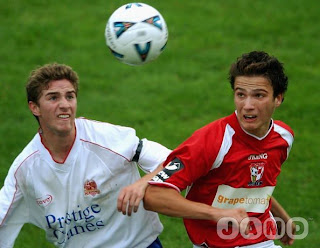 I had made a good name for myself at the Knights but when the NSL died and South came knocking it was just too easy for me to say of course I’ll sign. However, along with the initial signature there aren’t many highlights. Training with a retired Trimmers was great and even though he could barely move he still took the piss out of us. The first game against Heidelberg was great, the Championship in 2006 was brilliant but that’s where it all ends for me. Whether its a curse put on me by some old Croatian lady or simply bad luck my time at South reads as follows: 2005 – Glandular Fever (season); 2006 – Torn Hamstring and Lacerated Thigh (season); 2007 – Torn groin, concussion and head split open; 2008 – ACL knee reconstruction (season).

Not forgetting for a second all the mental issues which come with that kind of run of poor luck, which challenged my ability to get motivated week in week out, which probably doesn’t need to be put into details because everyone knows. I was spent and ready to give it up and many told me to do the same. 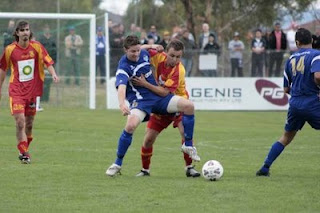 So why do I want to come back? I see the same desire in the eyes of my little brother and my students towards South that I had as a kid. I see their love for this club, I see others that have come before me with that same love. No other club has the team spirit that we have because we are honoured to put that top on every week. No other players can walk into clubrooms with the luxuries we have and look up at the names that have come before us. No other club has people like Trimmers and Jimmy Armstrong still around the place because even though they are legends of this game, they themselves know that this club is more special than any individual.

Until I am told I am no longer wanted at South I will keep coming back every year. Even when my body can no longer take it, I will be there supporting Hellas. Like my career, the club has had its dark days and setbacks. But it still has meaning for so many people, even though some try to deny it. Every time I look at my teammates I see that love. Every time I look at my brothers, my old man, my friends and my girlfriend I see that love. Hell, even when I speak to the old Greek bus driver Jimmy at my school, who’s been supporting this club since 1970 I see that love. South Melbourne is not a football club, it is a culture. I no longer play for my football ‘career’. I simply play for that shirt. I know that when I am gone, there will be plenty more to take my place and I will be there to support them… Long Live Hellas!
Posted by Paul at 17.7.08