Went down to Albert Park Field 13 yesterday to have a look at the State 3 Women's side take on Sandringham. The visitors had by far the better of the first half, dominating midfield, and eventually getting a goal from a goalmouth scramble. The second half, in particular the first 20 minutes or so, saw South come out all guns blazing, but just unable to get the equaliser. There was a clear penalty for a push not given, and when the Hammers got their second goal midway through the half, the South girls' heads went down a little, and while they battled on, the game was as good as done, the visitors a little more polished all over the park, and assisted by the referee not punishing their physical style. 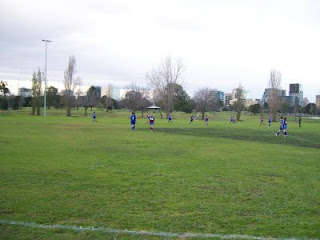