Some more conscientious readers may have seen this review already in last week's edition of Goal Weekly. Now that my own self-imposed embargo on posting the review is over, I feel quite comfortable in letting you view it here for posterity - and after all, Goal Weekly by taking the initiative of promoting Australian literary works, should get the benefit of having people pay for the privilege of reading it in the initial phase. How's that for setting myself up as the main attraction? I'm not using their title though, because I thought it was a bit silly. And why did they de-italicise the name of the book? Quite confused about that. You can download the first chapter from here. The book's 500+ pages, but it really doesn't take that long to read. 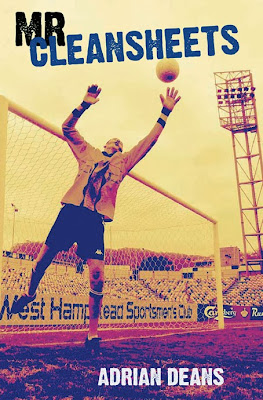 During the past two decades, mainstream Australian soccer writing – and for that matter, most other Australian sports writing - seems to have almost inevitably returned to the twin pillars of the shortsighted rants of your so called 'professional' analysts, and the ghostwritten autobiographies of local and overseas veterans. The recent emergence of the blogosphere has taken the wind out of the professional's sails to an extent, by showing that simplistic and alarming analysis can also be done for free; but where is the counterpoint to the reliance on biography, the works that show an imaginative and creative response to our soccer lives, and which is not directed solely at children?

Adrian Deans' new novel, Mr Cleansheets, may very well herald the arrival – or at least the return, for those with very wide reading and memory – of the Australian soccer novel to our literary consciousness. The novel's protagonist, Eric Judd, the titular Mr Cleansheetsis on the verge of turning 40, a labourer during the working week and amateur goalkeeping legend on weekends. After winning the title for his basement New South Wales side, his coach forcibly retires him. So Eric makes the foolhardy decision to head off to England to fulfill the dying wish of his Uncle Jimmy – to take up the outstanding offer of trialing for Manchester United – made when Eric was still a teenager.

Things don't get off to a good start; he gets into a fight at the airport, gets no further than the merchandise store at Old Trafford, and finds himself more or less where he started, albeit on the other side of the world – working as a removalist and illegally playing non-league football for the hopeless Bentham United. But his luck does start to change. He lands himself a new girl. The team starts winning. And in his own mind, he's starting to live the dream. But things can never be that straightforward. The past and the future catch up to Eric in all manner of alarming and hilarious ways.


Deans has a breezy and natural flair for this kind of writing, which allows the reader to get swept up in the amazing coincidences which the story throws up. His descriptions of the match action itself, while perhaps a little neat, nevertheless ring true; it's a difficult art to tell the story of a game that does not exist, one with a predetermined result. His strongest work though, comes in his descriptions of violence, especially those of hand to hand combat. The aforementioned breezy manner gets pushed aside for visceral and sensory writing that is at odds with most of the rest of the novel.

There are a multitude of accents in the novel – Irish, Cockney, French, Toff, Portuguese, Tcherman - which for the most part Deans handles well enough, but they are there more for comic effect rather than any sort of meaningful cultural exploration. Mr Cleansheets himself, being an Aussie, has no dialect issues whatsoever – his neutral tone assumed to be natural. Irvine Welsh this ain't, and at times the accents blend into each other, so that characters, especially some of the more minor ones – and there are many of them - can seem interchangeable.

Some readers, though crucially, not what I imagine is the intended audience, might blanch at Deans' explorations of masculinity – a very old school, protective form of it, with a few edges shaved off. In its own way, Mr Cleansheets is a love letter to masculinity – and the bastions of that masculinity that women can't ever enter or understand. In this case it centres on sporting clubs and the drinking and mateship culture – and Deans combines it with the classic 'you'll only go in for your mates' line, the sacrifices and camaraderie that can only be forged in battle, even if the war is fought on an enclosed patch of grass.

Deans also has some interesting, and potentially polarising things to say about the place of soccer in Australia, even though so little of the novel takes place there. Soccer in Australia is almost irrevocably a game outside the mainstream – and it will likely never win its place authentically inside the nation's sporting consciousness. Real soccer is in England or in Europe, where it is the main game, where it is in the blood of the people so to speak. For those in Australia for whom Australian soccer has always been the main game, and has (or had) its own mainstream that it has looked after for generations, this will perhaps place the novel as a work directed towards those fans more recently arrived at the game. The extraordinarily vicious portrayal of the rugby journo in particular is a classic example of the convert's attempt to prove their belief in the cause.

Being a certified intentional page turner, Deans' attempt to write a novel on football, but also on such other weighty and complex matters such as love, international pop stardom, the criminal underworld and Aryan conspiracy theories, could have turned into a right mess; yet he's actually managed to write something coherent and remarkably enjoyable. Mr Cleansheets is no literary masterpiece, but it is a lot of fun. By taking the notion of a midlife crisis to its logical conclusion, Deans has provided a novel for every person who has ever sat and wondered in the quiet of the night, what might have been had they taken the opportunities presented to them, instead of doing the sensible and responsible thing.
Posted by Paul at 13.5.10