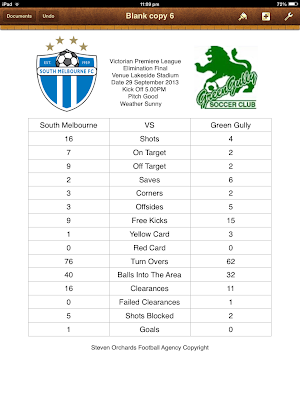 If you told me at the start of the year that we'd beat Gully twice - including once at Gully - and have a penalty saved in each of those wins, I'd have told you that you need to get off the drugs. Or perhaps I would have asked what the odds were.

When one of those penalties is in the 85th minute, as it was yesterday, you have to think about all the times Gully have managed to wrangle themselves out of, if not impossible situations, then at least something close to it.

During the first half, barring the final five minutes, Gully were scarcely in the contest. They did their usual business of trying to grind out time and territory, while we seemed to be able to get a few more than dangerous shots on target - there was one particular goalmouth scramble that seemed to defy the laws of physics in how the ball didn't go into the back of the net. It was the kind of half where, because we didn't score, it opened us up to the possibility of getting dudded by what I call 'Gully time'.

I don't have the stats or data to prove my contention, but my theory is that Gully have a 7-10 minute period, roughly from the 65th to 72nd minutes, where if you haven't made the most of your chances earlier in the game, they will punish you. They came close a few times during this period of the game. But so did we. Quite how Trent Rixon put that header wide, I don't think I'll ever know.

Hell, I'm not sure if it fell into this portion of the game, or just afterwards, but I reckon they had a massive shout for handball and a penalty. Their bench went nuts, and I reckon there was a collective gasp from the South fans near me who wondered how Perry Mur didn't award that penalty.

Then when it happened at the other of the field, Perry Mur again didn't award a penalty, until the linesman, in brave, but also very uncharacteristic VPL fashion, made Mur listen to his version of events, and thus a penalty was awarded. I still can't quite believe it. The Greek conspiracy theory DNA embedded within me just had to say out loud that Mur didn't award the second one initially because he didn't award the first.

Anyway, he did end up awarding the penalty. For whatever reason (cramp?), neither last week's penalty taker Rixon, nor Luke Hopper took the penalty. Instead it fell to captain and substitute Brad Norton. Now, I like Brad Norton (maybe against my better judgment), and he's actually scored a fair few goals this season, especially for someone who's spent most of his time as a defender.

But at no stage during the penalty routine did he look confident. Call it one of those great hunches that no one recalls when they get it wrong, but Norton's timid effort was entirely predictable - and whatever angle he was gunning, whether that was showing the captain's initiative, or seeking redemption for his mistake against Northcote just a couple of weeks ago - he made an absolute meal of it.

While I didn't think we were done and dusted, I had a feeling we'd be overrun if the game made it to extra time. Thankfully, Tyson Holmes stepped up to the plate. Holmes shooting from the edge of the box is notorious for seeing balls end up in the car park or lake behind the goals. Yet, when he actually keeps his shots low, they tend to nestle into the back of the net.

That's what happened last night at the crucial moment, when Soolsma laid off the ball to him on the edge of the area. Pandemonium broke out in the grandstand, and the apparently 2700 in attendance - while I'm not sure if was actually that high, it was certainly twice the 1000 odd that I thought would turn up at a maximum - all joined in as best they could in the chanting.

It wasn't over yet though, as Gully, who put in a much improved effort in the second half at least going forward, fluffed what looked like a point blank chance at the death. What was interesting about Gully was their insistence in walking the ball into the net. It was so unlike them, and it was more like... well, us, in a not too distant past. The first half was rough, the second half played largely between the two 18 yard boxes as the two teams became tired and space opened up throughout the middle of the field.

I can't say we weren't lucky, because we were. But we also had a share of bad luck and missed opportunities. Some, maybe in their propensity to exaggerate every achievement, tried to play this up as one of the greatest wins of our history. I won't go that far, but I can understand where they're coming from. From what the club has been through, not just this season, but the entire time since the NSL ended, these events and the emotions attached to them can just take a life of their own.

Fail To Plan, Plan To Fail
It doesn't excuse the poor organisation of the FFV at the gates, but I must admit I did feel like a big shot walking past everyone with my pre-purchased ticket. As for everyone down at the pub who kept saying "I'll go a little later, I'll go a little", well those people will never learn.

Next Week
Melbourne Knights this Friday Night at Somers Street.

Without meaning any disrespect to the Knights, or any other team, there are only two teams from VPL 2013 that I fear. One is Gully, because they're arsey cunts. The second one is Bentleigh, because they're just a damn good, solid all over the park team.

Having said, it's a game against the Knights, an old rival. It's a finals match, the first between the two sides since 1997. It's at Somers Street, in front of what will be a more than usually hostile crowd, because of the Knights hosting the Australian-Croatian Soccer Tournament. To quote Principal Skinner, "we've even bussed in troublemakers from others schools".

Knights were apparently killed on the counter last week, whereas we looked slow and hesitant in our fast break opportunities against Gully. Fitness will play a role as well. Our front two looked tired towards the end of the game, their mobility restricted.

Even taking into account that Knights' last home and away match was a dead rubber, can you really see them lose three in a row, at home, after doing so well this season? Especially when we haven't even beaten them anywhere since early 2011, and haven't beaten them at their ground since 2010.

Did you notice how much I'm trying to claim the underdog tag here? Then again. we've got nothing to lose, right? I mean, after all, look where we were halfway through this season. Now we've even managed to scrounge two cleansheets in a row. Surely that can't last, right?

Is Chicago, Is Not Chicago
Prior to the beginning of season 2013, I applied for a media pass from the FFV, as has become my custom. While in previous years I managed to acquire accreditation, this season I was rejected, with the justification that "you [sic] blog, while enjoyable, does not require a media pass in my opinion". I tried to claim the high moral ground, claiming to be more confused than offended, but I don't think I fooled anyone, least of all myself.

Now all of a sudden I've been emailed with instructions on how to vote for the Bill Fleming Medal, the league's media award, as well as a couple of other sundry awards. But how can this be? Am I media all of a sudden? Have I managed to move beyond the realms of being merely enjoyable to something more?

So here's what I'm thinking. Since I'm not really media in the FFV sense, but they want to take my vote into consideration anyway, and I'm going to enlist the help of my readership to come up with my votes.

I can't guarantee that they'll count my (our) votes, but since I wasn't expecting to be asked anyway, there's no harm in trying. So send me your votes either via email or in the comments section, and I'll tally them up or whatever and send them into the FFV by the close of business this Wednesday.

Obligatory NPL Victoria Update
Today was the day that the FFV would announce the successful bidders for an NPL Victoria licence - although as explained by persons on other forums, they had probably planned to inform the individual bidders first, to see if they would accept before making an announcement. Meanwhile the Anti-FFV forces sought a court injunction preventing the FFV from making those annoucments. The FFV have sought a delay to that court action (now scheduled for Wednesday), and have "in good faith, decided not to announce NPL licences today".

Final Thought
Sometimes you just get caught up in the emotion of the thing.