Kiss of Death, Under Duress - Knights vs South Preview 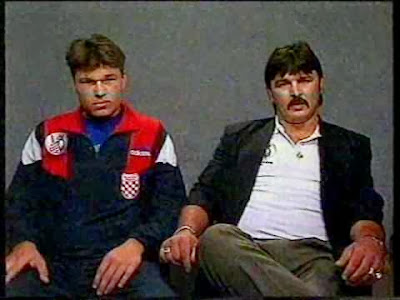 Off to Knights Stadium we go!

I have been requested to write something about this Friday's match. Not sure if any of you have noticed, but ever since I stopped writing, South has gone on a roll. If we lose on Friday, direct all mail/complaints to Paul. I write the below under duress.

After playing cat and mouse with Green Gully last weekend, Hellas was rewarded with a 1-0 win in the 90th minute courtesy of Tyson Holmes. HNK Melbourne Croatia on the other hand was drilled a new asshole by the Bentleigh Greens, in a 2-4 demolition. My sources tell me it could’ve/should’ve been more.

A brief version of events that unfolded on Sunday vs Gully. Firstly, pretty much every single Gully ‘ultra’ entered Lakeside with an FFV finals pass. This means that: 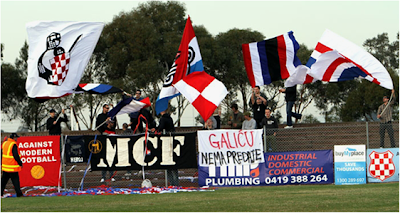 Secondly, they have to be the tightest ‘ultras’ going around. I counted four bags full of food and beverages coming through the gates. Absolutely tight, tight, tight. Thank fuck you are out of the finals. (for the back ground to this phenomenon, see this entry from August 2009 - Ed.)

Thirdly, Bradley Norton. *shakes head*. Woeful. You had about nine minutes on Sunday, and even that was too much. I expect you will warm the bench also on Sunday, and for fuck's sake, no more penalties for you my friend.

Fourthly, the goal was the cause of absolute pandemonium at Lakeside. Haven’t seen it like that since we won the grand final in 2006. Absolutely awol. Crazy shit.

Fifthly, there were many new heads at South. For those of you unaware of how the Greek community works, here is a short rundown. Pretty much they only support shit when it suits. A disgrace of the highest order. Blasphemous to say the least. 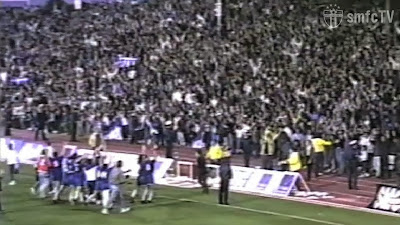 So off we trod to Knights Stadium on Friday night at 7.30pm. I like to call the place by what it should be called “Hrvatski Sportski Centar – HNK Melbourne Croatia”. They have the Croatian soccer tournament on this week as well, which means plenty of Croatians at the match hopefully. This match is worthy of an NSL atmosphere. Nothing beats the “Croatsia, Croatsia, Croatsia” chant on a Friday night. The bars should be stocked up with some pivo, the cevapi and raznjici should leave a waft in the air, the gulash and mixed grill should bring people to the social club, and the eye candy should be of export grade quality! (ooohhh yeahhhhh).

The Knights have been exceptional in their home and away games, but Bentleigh caned them last weekend. I sms’d a mate of mine down at the Knights and once again told him “the fish rots at the head, Marth's gotta go”. He replied with “LOL”.

Anyhoo, we are the form team of the finals series. Yes, Croatia should fear Hellas on Friday. HNK Melbourne Croatia 0 – South Melbourne Hellas 3. 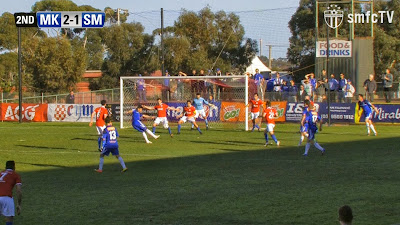 I dunno what else to write. Looking forward to Friday night something vicious. Haven’t slept for days. Getting my tifo ready. Pfft, tifo. Thinking deck myself in South colors or go ‘casual’. Car pool, or park car in dark street nearby (public transport is non-existent)? Eat before I go, or eat there? Sit in grandstand or on the ‘Hellas’ wing? These are some of the dilemmas I have for Friday night. I’m hoping some of you can help me out.

Back To Paul With The Latest NPL Victoria Guff
Well. Today the judge presiding over the case of whether to grant the Anti-NPL group's injunction has been delayed until Monday, when the motion to love the case to the Supreme Court will also be made. In it's own way, that's a pretty common sense attitude to take.

While that all seems very straightforward, sadly I was unable to make it out to the courts today, so I'm in no position to be able to verify the very explosive claims being made around the Victorian soccer internet community, first put out by the people from the Locker Room on their Facebook page:

Court update (with thanks to Tom Kalas):

However, Donald Sutherland of MFootball, who was at the court proceedings, has hotly contested this version of events, claiming that no such comment was made. Neither is there any mention of it in his article on the day's proceedings, which also talks about the possibility of NPL Victoria being delayed until the 2015 season.

On the flipside, Nicholas Tsiaras, one of the spearheads of the Anti-NPL group, has backed up the comment attributed to Tom Kalas (while also acknowledging he was not in court today).


From the Court - FFV understands & is prepared to see the dissolution of all traditional clubs. Is in favour of Zonal Consurtiums #NPLV
— Nicholas Tsiaras (@nicholastsiaras) October 2, 2013

For its part, the FFV has put out its own statement discussing the status of the court proceedings and its announcement of the successful bidders - but it has made no comment on this claim.

Someone here is clearly not telling the truth. Either the FFV did say these things in court, or they did not. If they did, and MFootball did not report it, then that is incredibly negligent and unprofessional from their part.

If these comments were not made in court, then someone from the Anti-FFV group may have started something they wished they hadn't - and while it may please their own rusted on supporters, it may not play out well in the wider Victorian football community, who already have reservations about some of the conduct of the Anti-FFV group, as well as their motives.

By that stage the mud may have well stuck anyway - as these comments were also rumoured to have been made during the mediation process. It's a game of life and death between the two sides, and the notion that the ends justifies the means is well and truly alive.

I've seldom had the ethical stomach for that approach. All I can do is urge caution and restraint, even though that bird has flown.

Grand Final Venue and Time
While we're not quite there yet, the FFV have set the date and time for the final. As with last year, it will be part of a double header with a Melbourne Heart game, on October 19.

Unlike last year's final however, this time the game will be played as the curtain raiser to the A-League match. And here's where it gets absurd - the game will start at 1:00PM.

Who the hell starts their grand final at that time? Do the FFV have such little regard for the competition that they're willing to make it play second fiddle to another event? If we're going to have this absurd nonsense of trying to boost the Heart's crowds, can we at least put the VPL final on where it should be - as the main event?

Not that it effects me this year, but I wonder what kind of restrictions they'll have on media this time. Last time all media pass holders had to apply for limited tickets and space in the media box. Those who didn't gain accreditation were denied access to the event, and had to pay at the gate - even though most VPL media personnel are well capable of doing their match reports from out on hills and terraces of the VPL.
Posted by Paul at 2.10.13