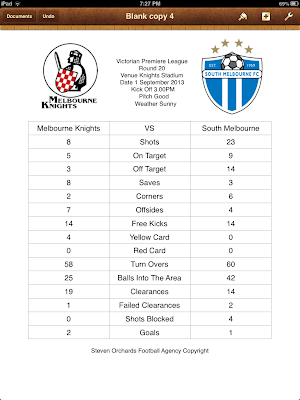 I feel gutted by this result.

The result and the manner it was achieved are not the reasons why this report is late - I spent most of today marking papers - but I wouldn't blame anyone for thinking otherwise.

A football match goes for 90 odd minutes. Maybe 30 of those are entirely inconsequential, with the ball out of play, or at rest. Most of the rest is build up, or recovery, no real danger of anything important happening.

So is it right or fair to say that this match was decided by maybe 10 seconds of action? Five seconds at one end, five at the other? How much of a game is viewed retrospectively? As what looked like an innocuous free kick floated towards Gavalas, is it right to say something felt wrong about halfway through that passage of play? Or is that hindsight taking over? Could a materialistic (in the philosophical sense) atheist such as myself start believing in premonitions because of high balls aimed at Peter Gavalas? Or has it become just muscle memory informed by at best semi-conscious statistical heart in mouth stuff?

Pete Gavalas made some good saves again. But that's not the problem. And even if the sun did get into his eyes, the horror of watching him deal with that high ball in the absolute worst possible manner - almost letting the free kick float into the net before palming into the path of a Knights player - was unbearable for this and other long suffering supporters. I can't even imagine what it's like for the goalkeeper himself, living every custodian's worst nightmare, and not for the first time this season.

The thing is though, we still went into halftime at 1-1 thanks to Tyson Holmes' first goal in ages, and looking to play the second half with the wind advantage. And we may have even gone into halftime with the lead. Where I was standing, I was in the absolute worst position to judge whether Trent Rixon's disallowed goal was offside. Trent's on the record as saying that it wasn't, but I guess we'll have to let the video hopefully decide again.

The wind made this game messier than it might have been, and the Knights handled it better for the most part. Our second half wasn't as good as our first, and both sides missed chances, until the Knights took the lead again. I still can't quite believe how Luke Hopper blasted his shot over the bar, when all it needed was for it to be curled in at the back post, nor how whoever took that shot from inside the edge of the box missed everything, goals, defenders, the lot. Late on we finally settled down, and made a late charge, but it wasn't enough. Our defensive efforts were more no nonsense than most recent efforts. But we also played a very high line in the first half that saw a lot of close offside calls.

Late in the game, Gavalas' moment of madness was almost matched by Knights keeper Chris May. Out wide, May didn't get enough purchase onto his kick, and it ended up at the feet of Alan Kearney - who probably should have been subbed on a lot earlier - at the edge of the centre circle. Kearney's shot towards the empty net, possibly our only shot on target in the second half, was almost perfectly placed, but May managed to scramble across and palm it over for a corner.

So what does it all mean? The loss sees us fall outside the five, level with fifth placed Green Gully on 31 points - but Gully also have a game in hand. Two wins should get us in, and if things fall absolutely our way, maybe even still a possibility of the double chance. But that's asking for a bit much. Getting into the finals at this stage would be considered a minor miracle.

The problem is we'll have to beat a Northcote side which, while they've secured the double chance, will be wanting to also win the minor premiership with the moral victory that entails. Then we'll have to beat Port away. Hume is also a couple of points behind us, and not completely out of the running, though they face the top two sides in the last two weeks and have a woeful goal difference.

I don't know. I guess I'm just scratching around for something to look forward to. We're not out of it yet, but my goodness yesterday's loss things harder.

Steve From Broady's Under 21s Report 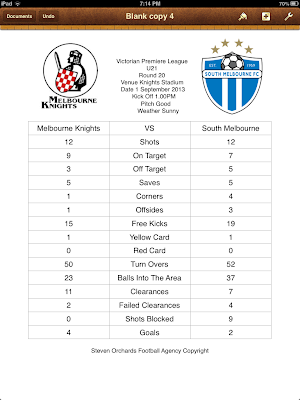 South Melbourne's under 21s played rivals Melbourne Knights at Knights Stadium on Sunday. South sitting fourth last were struggling to find form going almost two months without a win. The Knights kicked off on a sunny afternoon and they dominated early getting, into good positions and creating great chances to take the lead.

Three minutes later a South defender brought down a Knights player in the box and the ref awarded a penalty to the Knights. The Knights' number 10 stepped up and put the ball nicely in the bottom left corner to give the knights a 3-0 lead. South got a goal back just before half time when Francis Solano pumped the ball long to Baggio Yousif. Baggio took one touch and knocked the ball past the keeper and then ran into an empty net and slotted home to make the score 3-1 to the Knights as the lads went in for the half time break.

South kicked off the second half and the boys had taken some confidence from their late goal in the first half into the second half dominating the first 30 minutes of the second half. In the 60th minute Baggio was brought down in the box by a Knights defender and the ref awarded South a penalty. Baggio stepped up to the spot and converted coolly down the middle to reduce the Knights' lead to just one goal. South pushed for an equalising goal but it never come. In the 79th minute the Knights' number 11 broke down the South defence and scored a simple goal to give the Knights the win. It finished 4-2 in the Knights favour. South now slip down to 11th on the table. South host already crowed champions Northcote City at Lakeside on Saturday week at 6:00PM, until then, get around it.

Steve From Broady's Canteen Report
I was at Knights Stadium on Sunday afternoon. I received an invitation to eat inside their social club. I got a mixed grill which was pretty decent. I then wandered over to their canteen try a cevapi roll - it was stuffed so much it was almost bursting at the seams - that shit was legendary. I give the Melbourne Knights canteen a 9.9 the surprise packet of the season, almost knocking Pascoe Vale off their perch. Back at the South food van in two weeks, can they finally crack the perfect 10? All will be revealed then, until then, keep on eating.

Next Week
Nada. Week off for catch up games and the cup final.

Our next game is on Saturday 14th September, our last home game of the season. It's against Northcote. It doesn't get any easier, does it?

Around the Grounds
Friday night was spent out as SS Anderson Reserve. Bentleigh beat the Sharks 2-0, a thoroughly deserved win. Two almost identical first half goals, and a few botched chances to the Greens were the scant highlights of this game. Port did nothing. Honestly, they are perhaps the most boring team to watch in the league. Green Gully might grind out results, but at least they seem to care, and provide their share of crunching thug tackles during a match. Boring, but at least they give you a reason to hate them, which means there's some emotion in the contest. Port were down 2-0 and could barely muster the will to get a shot on target. The second half in particular was quite a pointless exercise. The most interesting thing about said second half were the randoms (Knights fans?) giving stick to Port defender Peter Roberts for reasons unknown.

Saturday afternoon was spent out at Brunswick City, with home side entertaining Altona East. Entertaining is probably not the right word. This was a pretty ugly game, on an ugly pitch, with one team getting the job done in an ugly way, while the other team did fuck all for most of it. Brunswick City won this fixture 2-0, courtesy of two first half goals to Kyle Joryeff, who took advantage of two loose balls in the box. Also in the Brunswick City lineup were Rhodri Payne as a defensive mid, Andy Sfetcopoulos in goals (still wearing pants; not taking his own goal kicks) and Arthur Tsonis, who was taking those goal kicks, and wearing the absurd number of 96 on his jersey. Apparently there was also an ex-South 18s player out there as well. In terms of former South players, East could only muster Andy Bourakis - Lester Abalos having wrecked his Achilles tendon I think it was back in pre-season.

The biggest news to come out of that fixture was Brunswick's canteen. Now I reckon the Altona East souv is the best souv in Victorian soccer, and while I don't think there's any home club bias there, it's easy to see how people may take that view. But for my money, the Brunswick souv used to be on par with the East souv. Sadly, like Richmond before them, a change in canteen management has seen their souv offering take a massive hit. Considering that was half the reason I trundled out there - and thanks to a police request at Flinders Street/Spencer Street stopping trains from moving through North Melbourne, it took forever to get there - I was very disappointed.

Kiss of Death, Found Alive!
The Kiss of Death has been missing action for most of this season. All of a sudden it appears on Twitter! You can follow them on @KODFootball.

Final Thought
I did not appreciate the attitude of the security person (Port official?) at the gate on Friday night, who complained about people getting in for free due to FFV passes and such. Not my problem buddy. Take it up with the FFV who hand out all these passes. Maybe get more Port Melbourne and Bentleigh people to turn up, instead of having half the (small) crowd made up of neutrals. It's sad when I turn up to a neutral ground and even I recognise half the people there.