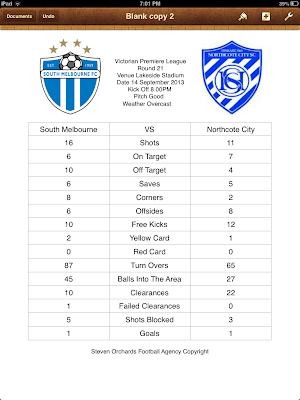 The whole night was fucked. The refereeing was fucked. The linespeople were fucked. Security was fucked. The ground announcer was fucked - we don't need AFL progress scores, the VPL ones will do thank you very much. Our first twenty minutes or so was completely fucked, under the pump and sending ball flying forward more in hope than in the enforcement of an actual plan. Milos Lujic was fucked when he could have easily let him teammate get the ball instead of himself, and therefore getting pinned for offside. Brad Norton was fucked for giving that attempted pass off to Gavalas which caused us to fall behind. Even our goal was fucked, not for being achieved at all, but because when we had a chance soon after to hit a corner into the exact same spot at the back post, Nicky Soolsma hit it towards the near post. I made a complete pork chop of myself yesterday, so fuck me as well. Port's win against Dandenong was fucked. Oakleigh dying completely in the arse is fucked. This whole season has been fucked. And who knew it could get even more fucked?

Doing The Maths
Now, what could have been much more a case of destiny in our own hands is now a case of not only us needing to win, but being reliant on other results going our way as well. This it how stands now.

With our draw last night, and Port's win, the highest we can finish is fifth. Hume's loss to the Knights today ends their slim chance of making the finals, barring some absolutely freakish results, which now that certain things have happened (see below) are unlikely to occur.

So, our only competition for that remaining finals spot is Green Gully. Currently, we're one point ahead of them, and a two goal better goal difference. However, Green Gully have a game in hand, which they will play midweek. It's against Oakleigh, who out of the finals race for some time now, have seemingly well and truly put the cue in the rack.

Gully's last game is at home against the similarly out of the running Dandenong Thunder, who also have little to gain from their remaining matches. Meanwhile our game against Port is against an opponent with a theoretical though highly unlikely chance of getting the double chance.

So here's how it's panned out.
Things will of course be much clearer after Wednesday night. But now there's also this to consider...

Dodgy Asian Betting (via Backpackistan)
By now you've all surely come across the Southern Stars match fixing fiasco, in which several of their players and their coach have been arrested.

Will this mean that Southern Stars will be expelled from the league, with all their results rendered null and void (i.e. 3-0 losses)? Without anything to go on other than a hunch, I doubt it. Imagine the can of worms that would open, considering that the parties concerned have yet to face their day in court - and no decision either on whether Stars' committee had any involvement and/or knowledge about this affair, or whether it only was limited to playing and coaching personnel.

I hope for our sake that none of our players - either those with us at the moment, or those who departed during the season - have had anything to do with these shenanigans. But there are people that are suggesting that this is the tip of the iceberg. Wait and see I suppose.

Then again, the FFV have come out with their own statement, claiming that along with the FFA, they "will finalise appropriate action to be taken against Southern Stars Football Club over the coming days" and that they "are currently assessing any implications associated with the 2013 VPL finals series and will make an announcement tomorrow."

Steve From Broady's Under 21s Report
As the game was played at 4:00 rather than 6:00, and our intrepid reporter couldn't manage to get out to Lakeside that early, his match report is based on what was relayed to him later on by someone else.

South Melbourne's under 21s played top of the table Northcote City on Saturday afternoon. Northcote were three points away from the championship and South were trying to avoid the wooden spoon (for fuck's sake, bit of an exaggeration there or what - Ed) . Northcote City kicked off and dominated from the get go, creating great chances and after half an hour they took the lead and it wasn't long after that that Northcote scored again to make it 2-0, and it stayed like that until half time. Northcote dominated the second half but didn't add to the score - it finished 2-0 to Northcote, who were crowned champions for the 2013 season.

Steve From Broady's Canteen Report
It was the last visit to the South food van for 2013 on Saturday night. The souv was wrapped in foil this week for the first time - maybe this was due to the cup game against Preston when my souv fell to shit and ended up on the athletics track? My souv on Saturday night was good, but it still was short of perfection. I give the final souv of 2013 at Lakeside an 8 out of 10. Hopefully next season South have there own social club and can take the food up a notch to an epic 10 out of 10. Next week we go to Port Melbourne on the last day of the season, with the Port canteen a chance to get a 10 - it should be an epic end to the VPL food championship, until then get a parma into ya!!!!!

Around the Grounds
A pretty fucked up finish to the Altona East - Keilor Park game yesterday. After falling behind to a brilliant free kick, East equalised with a powerful and well placed header. Then they got one of the most fucked up penalties I've ever seen - seriously, the entire crowd was laughing at it - which Andy Bourakis scored, before Keilor got what looked like another fucked up penalty for handball very late in the game (which they converted), making me think that it was square up for the earlier fuck up.

Final Thought
How shit were we that we couldn't even beat a team that was allegedly match fixing?
Posted by Paul at 15.9.13