Kiss of Death preview of round four Dockerty Cup match 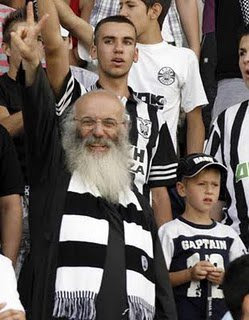 In response to numerous abusive emails, I can assure my readers that I have not given up the KOD segment. Last week's hiatus was due to Anzac Day. Lest We Forget, but that’s one weekend I don’t gamble other than play two-up down at the local RSL. They love me there! Unlike some of you sods who show me no respect, yet yearn for my segment and tips. Tell me you don’t! A lot of you have paid your debts off thanks to my tips! Don’t tell me otherwise, because I know I have.

Since there are no VPL games this weekend, I will be yapping on about the State Knockout Cup match this Saturday between South Melbourne and Oakleigh Cannons. There has been some off field controversy in regards to the fixturing. This Saturday for many of you pagans who don’t know, is Orthodox Easter Saturday. A brief rundown on Orthodoxy. In some year many moons ago, there was a schism between the pope lovers and the non-pope lovers. The pope lovers had a sook, and moved away from Orthodoxy proclaiming Rome as the Holy See. The non-pope lovers proclaimed Constantinople as the Holy See and still do to this day.

Anyhoo, the Orthodox faith is the one to be part of. The Oakleigh Cannons being majority Orthodox have requested from the FFV that this match day is changed to suit their religious freedoms. The FFV in their wisdom have said it ain't gonna happen. South Melbourne who are also majority Orthodox, have not requested a change and are happy with the fixture date.

I received some late mail on this issue from a reader. He states that Oakleigh apparently visited His Eminence Archbishop Stylianos Harkianakis who is the Primate of the Greek Orthodox Church in Australia, and he wrote letter to the FFV, basically stating the religious significance of Easter Saturday, and why the game should be changed. I do not know how true this is, but my reader assures me it is. Take it as you will.

My take on this is ‘nothing to see here’. Easter Saturday is considered a day of mourning. How it goes is, on Good Friday night at approximately 8.30pm we ‘walk around the block’ carrying Jesus from his cross to burial in his tomb. On Saturday we mourn his death. On Saturday night at midnight he rises. Now if the game was scheduled for 11:55pm on Saturday night, then yes, it would be an issue. But FFS, it’s not!

I believe the Oaks are having a whinge because their team is currently a rabble. Seen 'em against Southern Stars, and they should’ve lost. Southern Stars equalised with nine men on the park and could’ve won it after that. If Oakleigh has an issue with the fixture, then they can forfeit. They are going to lose anyway, so do it gracefully and just take the 0-3 loss. Stick by your morals and religious obligations and put your money where your mouth is. Saturday is usually spent preparing for Sundays feast. That’s about it.