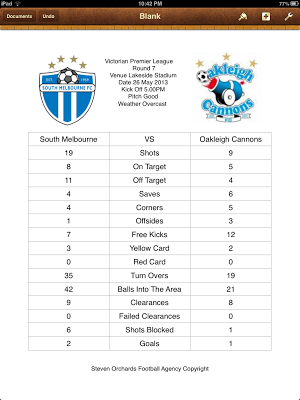 First up there was a minute's silence for Tony Toumbourou, who as was reported recently, passed away after a long illness.

Games between these two sides usually provide the goods in terms of a spectacle. The most notable exception to that off the top of my head would be the finals match we lost to them a couple of years ago. For my buddy Gains, it was a bit more obvious - the dour 0-0 draw at Lakeside in 2009 that was his first South Melbourne experience. Thankfully, this game had its fair share of action, and regardless of the result was the kind of game that would have the punters coming back for more.

Perhaps a little unusually, I hadn't seen Oakleigh play at all this season, so I wasn't quite sure what to expect. Their form hasn't been great, and thus there was the coaching change with Miron Bleiberg now at the helm. A few people have said that it was the worst Oakleigh side they've seen for a long time. I'd disagree, but I don't think that I can. I didn't think Oakleigh looked too bad going forward, and they probably should have opened the scoring about 15 minutes in - Peter Gavalas pulled out a terrific save after bolting off his line.

Matthews was making his first start in several weeks, after having broken his arm in a work related accident, and thus Dimi Hatzimouratis was moved further upfield to a more suitable midfield position. Rixon started again. There was no Van Eeken, and no Fernando. Apart from a brief period early on, and the last 10 minutes or so perhaps when we went into our sehll, we dominated this match. Our midfield was well on top, moving the ball quickly, winning the 50/50 challenges, and opening up the oakleuigh defence almost at will.

All that was needed was the goal, and eventually Hatzimouratis drilled one home that left everyone stunned, not least Italiano in the Oakleigh goal, who stood rooted to the spot. One observer reckoned that it must have taken a deflection for the keeper to stand still like that. I suppose we'll see when the video comes out. Hatzimouratis' second goal looked so easy, I was wondering how we didn't stuff it up. Some good team play exposed Oakleigh out on their righthand side, and the ball was cut in without much fuss for a simple finish for the goal. 2-0 up at halftime and looking good.
﻿﻿ ﻿﻿
The second half was more of the same, only without us being able to really put Oakleigh to the sword as we should have done. That wasn't helped by Rixon being shirtfronted on the goal line when it looked like he would have scored an easy header to make it 3-0. It was about a billion times the penalty than the one he received last week. Italiano's rugby tackle - outside the box! - not being punished was just hilarious. Not so hilarious was Gasparis being injured, and hobbling off. I've really enjoyed his play this season, and hope that this doesn't derail his season. Rhys Meredith's miseed opportunity will be hard to beat this season. With so many options available - most notably to either go around the keeper or pass the ball laterally for the supporting player - he decided to try and tuck it past Italiano who made a good save.
﻿﻿ ﻿﻿ Oakleigh started to make some inroads towards the end of the game, mocving away from the fancy stuff they'd favoured for the most of the macth - and usually thwarted by a poor final pass or masses of South defenders - and tried a simpler approach. It piad off in the 91st minute when new recuirt Alex Smiht scored, but we managed to hold on for the win. Why Tsolakis didn't make any subs, especially for an obviously labouring Rixon, I don't know. He didn't even make a sub for the sake of running down the clock. It was quite frustrating, especially watching the team fumble its way to what may have ended up being an unjust result.

Still, it would be unfair to focus on the negatives too much, because for the most part we looked good out there, even if the opponent was not at its best. Rixon had a much better game than last week, and looks to be getting his touch and match fitness back. Kelly was fearsome with his tackling. Matthews, while not faultess, also looked to be on the improve from his scratchy form in the seconds. An interesting middle portion of the season coming. 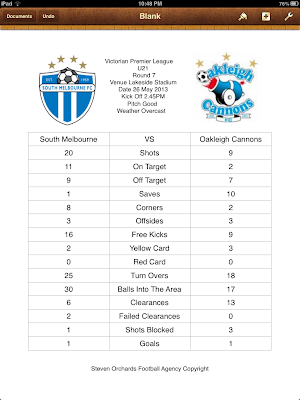 Steve From Broady's under 21 report
On Sunday evening South Melbourne's under 21s took on Oakleigh Cannons at Lakeside Stadium. South, who were coming of a poor result last week, kept their squad unchanged. The game started off very slowly and it took 10 minutes for the first bit of action to occur when an Oakleigh defender appeared to swing a fist at Anthony Giannopoulos and started a minor scuffle. The ref ran in quickly and broke it up but to the amazement of the crowd the Oakleigh defender managed to stay on the park.

After that Oakleigh Cannons pushed forward and tried their luck taking a shot from 30 yards out and finding the back of the net to give them a 1-0 lead after 15 minutes. In a half that was very even South Melbourne's Solano picked up a yellow card just before half time for a rash tackle. Oakleigh went into the break leading 1-0.

South come out attacking early in the second half, dominating the game for a long period of time with no reward. The South coach made a very attacking move putting on a third striker, Sebit Moun, early in the second half. As the second half started to come to an end another South player found themselves in the ref's book. In the final stages of the game Oakleigh thought they were on their way to three valuable championship points before an Oaks defender brought down a South striker in the box and the ref awarded a penalty to South in the dying seconds of the game.

Anthony Giannopoulos stepped up to the spot and smashed the ball into the back of the net to earn South a 1-1 draw in what was a disappointing showing from South this afternoon who are starting to fall behind in the league now dropping into the bottom half of the table. Next week South play Pascoe Vale away and they must be going there for a win if they're serious about wining the championship this season.

Steve From Broady's Canteen Review
South's canteen was in the spotlight for the second time this season and must have taken the advice on board about making their souvs better with the South canteen taking their souv up a notch this week with a very nice serving of good meat and garlic sauce evenly portioned through out the whole souv. I give this week's souv a 7 well done South food truck. 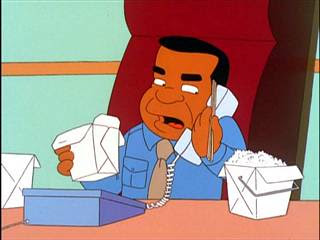 Three Prawns are Hardly a Galaxy!
At least Gary Coleman managed to get three prawns. I only got two in my nasi lemak at the Mamak outlet on Lonsdale Street. This was somewhat made up by Steve from Broady getting a nose bleed. Could it have been from the food being too spicy? I don't really know about such things, but for some reason it was funny. How very immature of me.

Chants
You're supposed to be in church!

Around the Grounds
Altona East 0 La Trobe 0. Fairly forgettable game. At least last season East were able to eke out a few 1-0 wins - on Saturday, outside a five minute period in the second half where they had a couple of good chances, they never seriously looked like scoring. Had a few corners and frees around the box, but for the most part delivery was atrocious. La Trobe defended well enough and looked disciplined, but it would have been nice to maybe see them chance their arm a bit, and play with an extra man up forward.

Next Week
Pascoe Vale away. They toweled us up during the pre-season, were apparently atrocious at the start of the season, but have since picked up somewhat, and are coming off a 2-0 win away at the Thunder.

Final Thought
It's a few weeks late, and I'm not really much of a metal fan, but RIP Jeff Hanneman.
Posted by Paul at 27.5.13