The Thing That Would Not Die - South Melbourne 3 Richmond 2 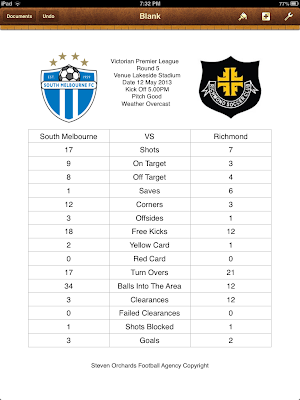 What a week. Even if it was only in the world of pretend - and who knows where reality ends and fantasy begins at South Melbourne - it was nice to feel like we were genuinely alive again, instead of pretending that we weren't only marking time.

So after so much A-League ambition nonsense, it was time to actually play a game. First home game of the season after a month away and an Oakleigh forfeit, and according to Chinese whispers going around the ground, even the FFA and Michael Lynch were there. Sadly, I could not verify that either of those was true. Regardless of these the truthiness of these facts, this was the kind of occasion where we usually balls it up. And when Richmond scored their second goal early in the second half, it looked like it'd happened again.

Indeed at 0-2 down I had people yammering away that this was like the Southern Stars debacle last year, I however unusually had the feeling that if we could somehow manage to pinch a quick goal, we'd have a good shot at getting the win, or at the very least a point. Tyson Holmes' overhead goal was as good a way as any to get back into the game. A goal mouth scramble saw the ball bounce high, and you could see the scenario set itself up, see Holmes intent to try it even before perhaps he knew it himself. It looked perhaps more spectacular than it was, the shot just looping into the back of the net, but they all count the same. And when in future times, we'll let fallible memory make it a screamer from the edge of the 18 yard box that no one could have saved.

The 2-2 goal was more regulation. A Brad Norton cross, a header, a goal, Holmes with his second. Have I mentioned that it seems like we've been sending in a lot more crosses this season? It eventually paid off. The third goal was less classic, but just as important. Andy Vlahos, who came on after the second goal replacing Joe Keenan, made himself a nuisance from the get go. After an earlier sideways pass across bamboozled the Richmond defense - and unfortunately the South players who should have done better with the shot - Vlahos found himself free thanks possibly to quick work by the ballboy. His shot was parried by the keeper straight into the path of Rhys Meredith, deflecting off him into the goal.

The rest of the game saw us mostly control the tempo, and thwart a couple more attempts by Richmond to pinch a late equaliser. There are problems. Obvious problems. We look vulnerable out wide. There were communicating issues. I suppose some would counter balance that by saying we also look dangerous on the wings. Perhaps I expect too much from part time footballers. We also miss Alan Kearney's control of the midfield. But we're scoring goals, and thus far winning a lot more games than not, so let's save the complaining until we collapse in a heap mid-season.

Ball Boys
Now I'm all for them being out there and doing their job, but someone has to give them a little bit of instruction, lest I end up having to yell instructions from the back of the grandstand to them again and end up looking like more of a twat than I already do. Here's how it should be.

If we're in front:

Very simple. They seemed to sort themselves out by the end, which was good to see. But this was no thanks to Gus Tsolakis though, who tried to play up the sportsmanship angle by giving the ball back quickly to Richmond when they were behind. What were you thinking man!

Most of these clubs don't have ball boys. Some even take delays because of balls going onto the freeway as a normal part of the game. We must take advantage of this as much as possible.

You Got To Know When To Hold 'Em
After we'd well and truly started our comeback, you had more than one wit ask Richmond coach Grant Brebner how multi-bet was going.

Long Time No See
After the game, on my way down the stairs, someone called out to me. It wasn't one of my usual acquaintances. In fact I thought my eyes were deceiving me. It was my cousin George. Growing up, George had been as passionate as any South fan that I knew. He had taken me to a few NSL games (such as this one against Perth Glory - he should have taken me to more, but that's a long and complicated story). Like many others, he'd pitched in to help fund the construction of Lakeside after our move from Middle Park.

And then the NSL ended, and things changed. Whenever I saw him – and my family being the way it is, I was lucky to see him once a year – soccer talk revolved around Greek soccer, the EPL, maybe the A-League. After professing to going to Victory games, he thought it quaint that people were still going to South, that I was still going. In what could only come across as patronising, he said it was nice that people were still keeping the club going, even if most people had moved on.

Being a South fan in the situation we've found ourselves in, my reaction was quite predictable. I was angry. I felt insulted. How could someone who'd professed such love for the club now write off that experience as nothing more than being there for the sake of supporting soccer? When the club had given him so much – being 10 years older than me, he would have seen every national title that we won – could he not repay that with, if not attendance and memberships, than at least the courtesy of not re-writing his own history?

And on Sunday, as I took my usual spot up the back of the grandstand, he was there, about 15 rows further down in the same bay, with one of his sons, watching South come from 2-0 down for a 3-2 win. We chatted for a bit, these things always being harder than they should be. He said he'd be back, and while I certainly hope he will, the fact that he came back at all speaks volumes to me about the true place of the club in his heart. After all, he said as much himself.

Maybe I've been too harsh and too dogmatic on this front. 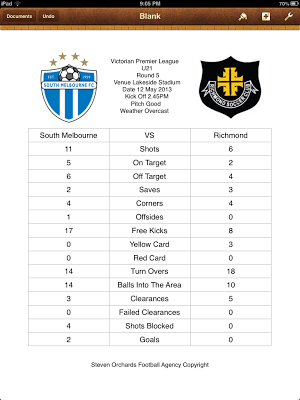 Steve from Broady's Under 21s Report
South Melbourne's under 21s were back in action on Sunday afternoon returning to Lakeside Stadium for the first time in 2013, to take on last season's champions the Richmond Eagles. Trent Rixon and Tom Matthews both remained in the 21s after Peter Tsolakis deemed both players still not 100% fit. South Melbourne were looking to bounce back after the poor showing in the previous round. Sebit Muon found himself on the bench after scoring last week, a decision that raised a few eyebrows. The game started off very slow and it took South ten minutes to kick into gear. In the 13th minute South whipped the ball into the mixer for a towering Trent Rixon to head home and give South a 1-0 lead and that it stayed like that for the rest of an uneventful first half.

In the second half South come out firing and in the 49th minute Anthony Giannopoulos found himself one on one with the keeper. He rounded the keeper with ease and chipped the ball into the back of the net to give South a 2-0 lead. 20 minutes later Giannopoulos found himself in a great position inside the mixer but Rixon was unable to provide the magical cross that he had received in the first half. As the game drew to an end it started to become quite clear that Matthews was not having the best of games and maybe will need another week or two in the 21s until he gets his game back. The full time whistle went and South were 2-0 victors against last season;s champions and will march on with lots of confidence next week against Hume City away until then GET AROUND IT!

Steve from Broady's Canteen Review
Sunday saw South Melbourne's food truck in the spotlight for the first time in 2013. The score system for South Melbourne home games will be as follows. A score each week will be all put together and averaged out to give South's food truck a final score to rank them in the 2013 VPL canteen championship table. I had a souvlaki and was not too impressed. It was very dry and cost $10. Later on in the day I had a kransky; the price was a little better, but the quality of the food stayed the same. I rate week one of the South Melbourne food truck a 4.5/10. They will have 10 more chances to get their act together and get a magical Altona East style souv 10 pointer.

Next Week
Hume away on Sunday. Haven't seen them play this season, but their form seems a bit all over the shop. I expect us to be tested though.

Final Thought
They played Zombie Nation after one of the goals went in. A fan and I talked about Time of the Season by The Zombies. Someone whose love for the club I assumed was dead was, at least for a little while, resurrected. Is there a theme emerging here?
Posted by Paul at 13.5.13