Every time I go to Chaplin Reserve, I always wonder if it will be for the last time. I went there twice last year (I think) for cup matches as a neutral, and the entire outer side was off limits, along with most of the Anderson Road hill, due to the Regional Rail Link works. It was the same deal yesterday while walking over the grade separation on Anderson Road which the Ballarat line now travels underneath, instead of weaving my way through the old gates. I regret now not taking any pictures, because it was kinda cool. Can you believe a fellow South fan (who doesn't come to many games anymore), once accused me of being a gunzel?

Like last year's visits, most of the smallish but still vocal crowd was squeezed into the northern side of one of Victoria's oldest soccer grounds, which will someday no longer exist. The media box was tarted up something nice as well - it no longer looked like a shabby portable, though the filming position wasn't ideal. But then again, unless you're game enough to get on the roof, Chaplin Reserve is a rubbish ground to film at anyway.

While the history of the preceding Sunshine soccer clubs prior to George Cross' arrival in the early 1980s has been pretty much obliterated (we're not the only wog club to have negated an anglo club's existence via a merger/amalgamation), I at least managed to get a photo of the old Railway Reserve Pavilion lettering. Hopefully once it's all gone, they take it with them to wherever they end up in Caroline Springs, in one form or another.

But most history gets lost into the aether anyway. Who today associates the suburb of Sunshine with the Sunshine Harvester, and one of the landmark legal judgments of Australian history, let alone the reminiscences of those who remember Sunshine City, a good local team who wore yellow and black and who were the custodians of the Railway Reserve prior to George Cross' arrival after the latter's peripatetic existence up to that point? How many Georgies fans are left to mourn Bobby Adams, centre half in George Cross' greatest achievement, the 1964 Australia Cup winning team? It was a long time ago, and it's not getting any closer. 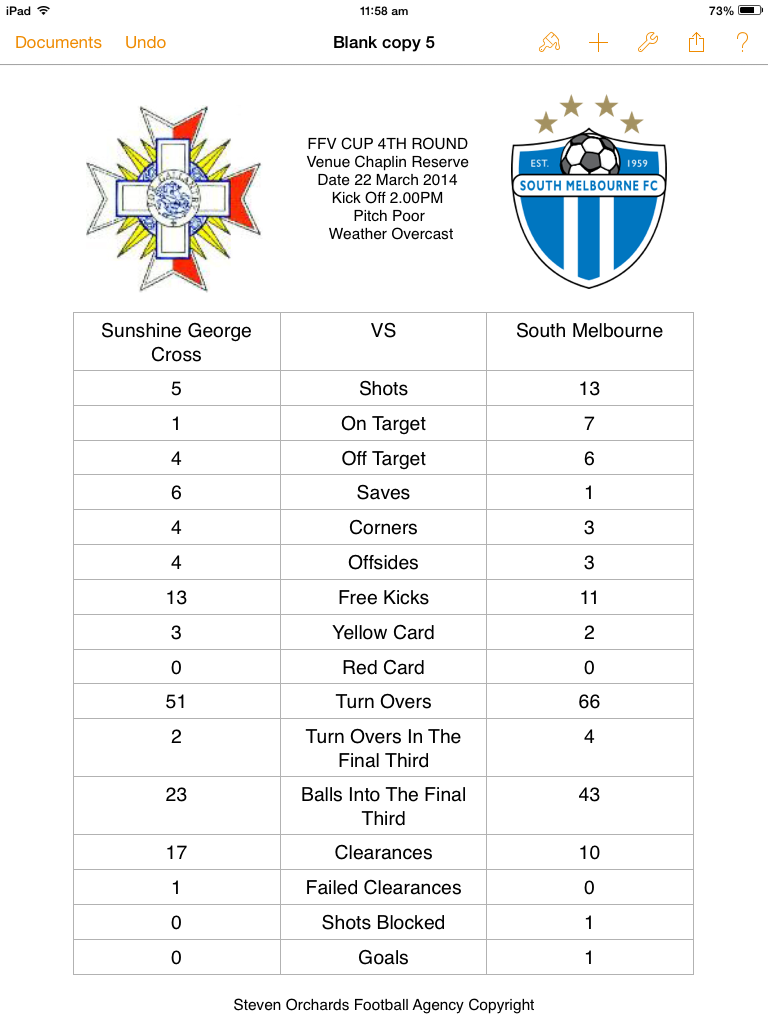 After the minute's silence for Adams, the game was on. South had a very strong line up, even with a few changes from last week. Kiwi recruit James Musa made his South debut in place of Dimi Tsiaras at centreback, Brad Norton made way for Andrew Mullett, while Leigh Minopoulos got a start ahead of Milos Lujic up front. The field was in very poor condition, back to the usual Chaplin Reserve antics, and not conducive to pretty football by any stretch of the imagination. This meant that somehow this game was even uglier than last week's game against Heidelberg. Still, South tried to be patient and build out of defense, and I felt that we avoided the overuse of the long ball tactic.

Playing into the breeze during the first half, South should have probably been two up at half time, but all our best chances seemed to be hit straight at George Cross keeper Robert Santilli. At other times Nick Epifano, who otherwise had a decent game, was castigated by some South fans for not pulling the trigger earlier and taking a shot. For their part, it's not like the Georgies weren't showing any initiative in the first half, what with having a few free kicks and corners, but in general big striker Bobby Lojanica was too slow to get past our defence, and he wasn't able to bulldoze his way through with his strength either.

So 0-0 at half time, with the positive being that at least we weren't down, but who was thinking about the positives? Every minute that passed during the second half added to the tension, as George Cross wrested the early ascendancy and were finding ways through our right hand side in particular. Things weren't looking great for us when they managed to break through that side again, but their best chance of the game was placed wide with the goal beckoning.

The decisive momentum shift in the game came when a fired up Milos Lujic was subbed on for Minopoulos. Lujic seemed to be well fed up with not only our performance but also the time wasting tactics of the Georgies, who right from the start of the game were taking an eternity to take their throw ins, free kicks and corners. When the ball was kicked out of play for an injury, Lujic chased down the throw in, without quite managing to get close enough. When it happened again (and of course the ball was kicked out only after the Georgies realised their attacking play was going nowhere during that possession), Lujic almost made it to the ball before Santilli, who, after collecting the ball and clutching it to his chest, threw a shirtfront with a possible raised elbow, and Lujic went down.

To my surprise and delight, the referee awarded us the penalty. While it wasn't a carbon copy of the goal from that game in 2009, it may as well have been for its effect on the game and the opposition supporters. Santilli has form for being a bit of a nutter (others use much stronger language) and for more than the odd brain fade, as this clip from a few years ago (check from 3:00 to 4:00) suggests. Anyway, Jamie Reed stepped up to take the penalty. He put it away and we held on reasonably comfortably during the extended allotment of injury time.

What confused me and a few others (apart from why the hell would you even think about giving the ref an excuse to penalise you for pulling such a stunt) was that if Santilli had indeed committed such a heinously violent act, shouldn't he have also been sent off? Then again prior to all of that, Tim Mala was even luckier to stay on the field when, after having given the ball away with a poor pass, then put in a less than stellar effort in trying to get it back in anything resembling a legal manner. At the end of the day, because we won the game I can say without the merest hint of bias that it all evened out in the end.

Special mention to Vin Cottagio/Leo Sayer/Arnold Horschack, aka the linesman on the northern side, who had an absolute shocker. I reckon at least 3/4 of his decisions were the complete opposite of what should have been given, but everyone has bad days. He can probably thank Santilli for taking the attention off everything else that happened yesterday.

Next week
Away to Port Melbourne in the league. I've seen Port twice this year, and while they've shown signs that they could definitely beat anyone on their day, if we play at our best we should be able to come away with all three points. The surface there isn't looking as crash hot as it usually does either, though it still should be about 10 steps up from Chaplin Reserve.

It will also be interesting to see how they serve their souvlaki. Last week it was in a roll, and pretty bland. Yesterday it was in a pita, not wrapped in paper but placed in a box as an almost open sandwich, which meant any spillage of meat or salad ended up in a safe place and not on the ground. It also tasted OK (I think that may have been cucumber in their tzatziki, which is a step beyond what most clubs offer when go down that route).

Around the grounds
Last week after my match report, I managed to get out to Paisley Park for the North Sunshine Eagles vs Altona East game. Nice day for it (souv was great), pity that Altona East found themselves 3-0 down and not firing much of a shot until some dodgy keeping got them back into the game making it 3-1. Then a late penalty could have seen them make it 3-2, but they hit the shot straight at the keeper. Finished 4-1, but North Sunshine for all their limitations have a recent habit of derailing the cup hopes of higher ranked opposition, knocking out Altona Magic a few years ago, and even Box Hill United yesterday.

Since we won our match, it was safe to head over to Port Melbourne for their cup game against Northcote, on paper probably the pick of the fourth round fixtures (actually, I really had my eye on Pascoe Vale vs South Springvale, but it clashed with our game). I never get hassled as much about FFV passes as I do at Port Melbourne (yes, I managed to wrangle one on Thursday for my history committee work), but I reckon now that they realise that I'm Greek (a long story of red headed/auburn haired Thracians) it just might get easier.

Anyway, Northcote were the better team early on, with Marinos Gasparis looking in ominous form. Rixon looked a bit proppy, not moving very freely and which only seemed to get worse once he seemed to pull a groin muscle, but he stayed out there. It was interesting to see Kamal Ibrahim playing as almost a box to box midfielder for Port. Northcote went into the halftime break 2-0 up, the difference between the two sides being Northcote's finishing (even if one of those was from a penalty). Port had two or three killer chances of their own and took none of them.

Northcote shut the game down in the second half, turning the match into a fairly tedious experience, as was their right to do. Port couldn't muster up pretty much anything of note going forward, and that was that. If you're trying to figure out some of the 'notable' teams who made it through to the next round of the cup, they include Thunder, Gully, Knights, Hume City, Preston(!) and Werribee City. The losers included Heidelberg, Ballarat Red Devils, Pascoe Vale and Oakleigh. If we're going to qualify for the FFA Cup, let alone win the Dockerty Cup, there are still plenty of good teams to get through.

Elias Donoudis' bright side observation
After Oakleigh was bundled out of the cup by Werribee City:

Amount of times that I was mistaken for a North Melbourne fan yesterday because of my scarf.
Two.

Ratio (only slightly exaggerated) of Victory merch to Georgies merch at Chaplin Reserve
1:1.

Vaughan Coveny's (current George Cross technical director/head of football or some such) response to my question on whether he would consider coming out of retirement to play for Altona East, because they really, really need a striker.
Polite 'no'.

Final thought
If we never play the Georgies again, the one thing I'll miss most is the Kinnie. The burgers and kransky rolls with the curried onions, not so much (if you have to choose, go for the burger).
Posted by Paul at 23.3.14