This plaque (click the photo to enlarge), commemorating our first league and Dockerty Cup double, achieved in 1974, was located in one of the glass cabinets in the social club museum. 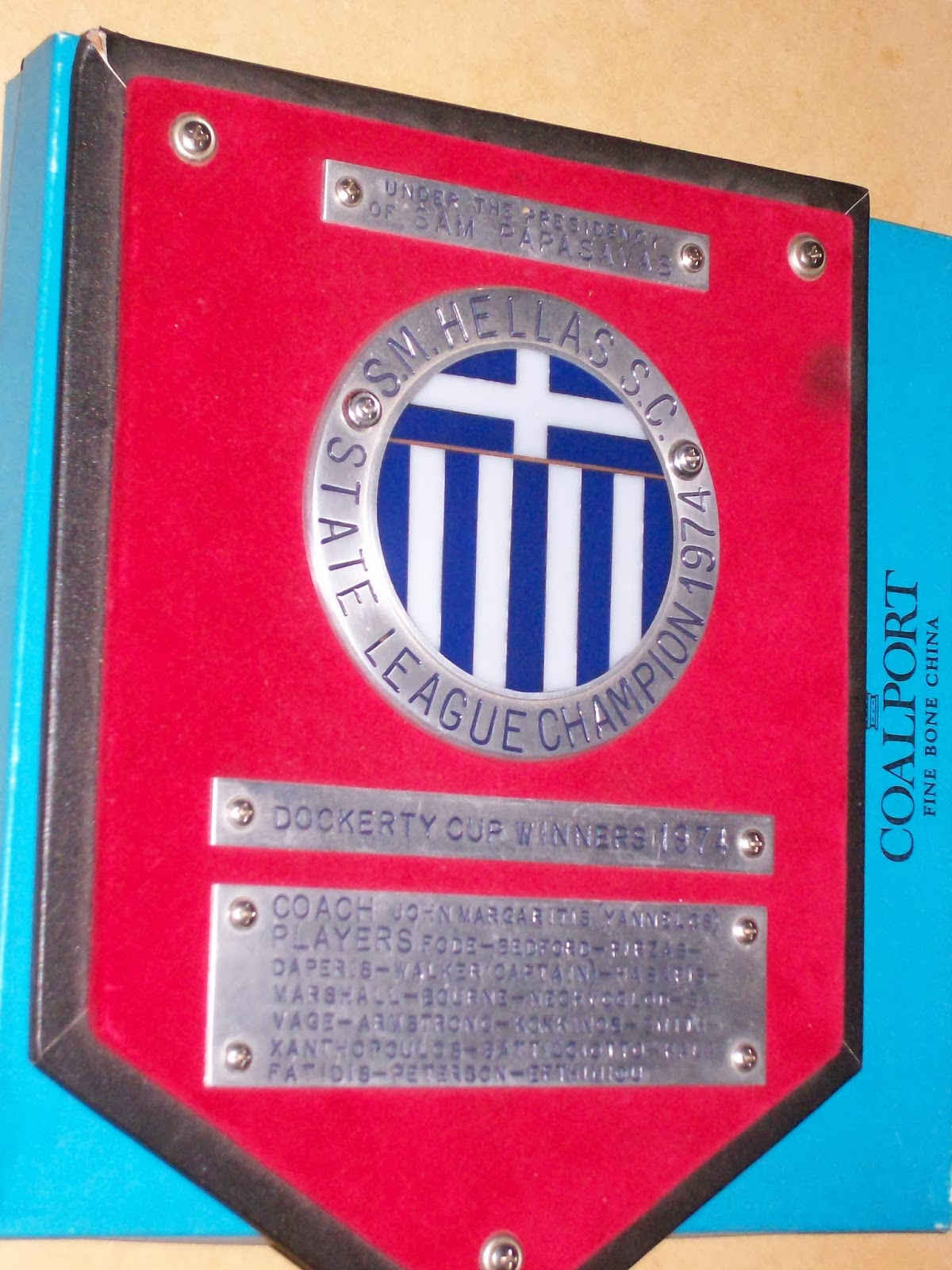 The achievement saw the breaking of what must have been a very annoying drought for Hellas. Since its inception, despite being a very strong league side, South was a comparatively rotten cup team. Despite having won five league titles from 1962-1972, Dockerty Cup success had proved elusive. In the 1960s, South had a bad habit of getting beaten by cup specialists Slavia, whether in the semi finals or the 1967 final; this was followed by finals losses to Croatia (1968) and Juventus (1970). Even our Ampol Cup pre-season record wasn't crash hot, taking us until 1969 to break our duck in that tournament (sometimes seen as a turning point in our history after the struggles following the 1964-65-66 league trifecta, though we would have to wait until 1972 for another league title). The less said about our Australia Cup record, the better.

On the way to the 1974 Dockerty Cup final, South had beaten Prahran City 3-1, old cup nemesis Prahran Slavia 3-0 and Footscray JUST 1-0, before taking on Ringwood City Wilhelmina in the final. Four first half goals ended the game as a contest, with Wilhelmina adding a goal late to make it 4-1. (Wilhelmina, the 1958 winners, would make one more Dockerty Cup final before slipping into near oblivion, losing 3-2 to George Cross in 1978).

The last time we won the Dockerty Cup (under any of its guises) was in 1995, when a young team beat the more highly fancied Melbourne Knights 3-1. It was the first step on the road to our back to back NSL titles. The last time we won a league title was in 2006. 2014 sees us therefore tie the record of 1976-1984, when we struggled with the step up to the national stage. It's surely a record that none of us want to see this South side surpass. Considering that this season it's first past the post - and we haven't finished on top of the table since the 2000/01 NSL season - I'm not super confident about us snaring the title this year.

Nevertheless, as we embark on another league campaign, I absolutely wish the team all the best this season, and hope they can at least take one trophy home this year. If we could somehow replicate the deeds of the 1974 team, even better.

Epilogue
Fun fact about 1974. We started that season with a 1-0 loss against Fitzroy United Alexander, and beat them 4-0 in round thirteen. Ulysses Kokkinos actually played in both winning sides!
Posted by Paul at 12.3.14