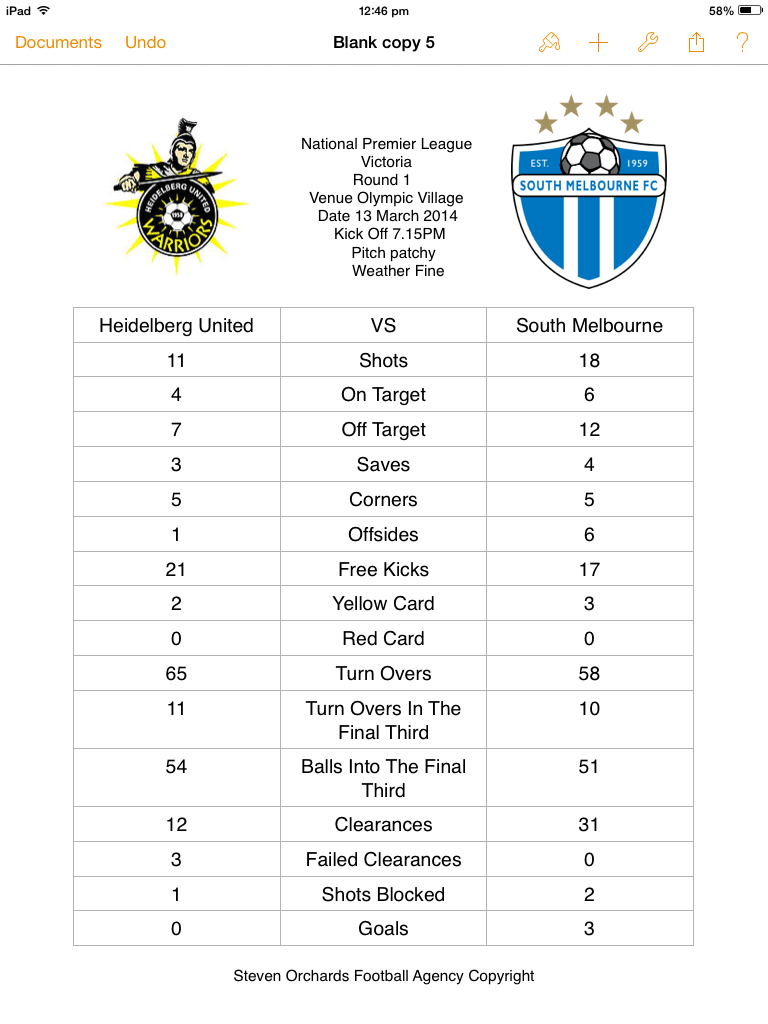 The first match of the season is always a strange one. For starters, you see a whole bunch of people you haven't seen in months, and wouldn't see outside of the club. It's like a high school reunion, until you have to do it all again the week after.

The second thing I noticed were the efforts Heidelberg had gone to in order to make Olympic Village look half presentable. New scoreboard, a ton of sponsor boards, much needed paint job on their grandstand and a beautiful surface. So, credit to Heidelberg and the effort they've put in, and credit to the punters for turning up in numbers - over 3000 apparently, which was ten times the crowd this fixture got back in late 2012. Imagine if it'd been held on a more suitable day.

But they may have considered at some point perhaps building a slightly better team, even with long term planning taken into consideration. Going forward they were OK without being spectacular, but defensively they were a mess. Griffin McMaster, so often a thorn in our side had a nightmare start to 2014, with his attempts at punching the ball clear failing to do anything other than create chaos in his own penalty box.

Eventually after one of these scrambled passages of play, which seemed to go on forever, Matthew Theodore latched onto the loose ball and put it in the back of the net. And remember that beautiful surface I mentioned earlier? Well, when a one on one contest saw a deflection take a wicked and yet entirely appropriate spin towards Milos Lujic, it left McMaster stranded off his line as he watched Lujic's chip sail over his head for 2-0. Had the surface been at its more regulation crap standard, that ball would have bounced any other way but the way that it did.

With big men Jamie Reed and Lujic up front, our game plan was largely based around getting the ball to them as quickly as possible, which meant long balls and plenty of them. But complaining about a Chris Taylor coached team playing too much long ball is like complaining about the sun rising in the east, Kiwis and their fascination with L&P, or FFV not giving me a media pass. These are mere facts of life.

Besides, we actually also defended fairly well, pressing Heidelberg in their own half, and forcing them to turn the ball over in dangerous positions. That meant we also often dived in with a touch too much eagerness, giving away a few too many fouls and collecting a few too many yellow cards - but again, it had echoes of Chris Taylor's treble winning Dandenong Thunder team. Let's not be mistaken - there were also moments of neat passing football - but the main point was to get into positions where we could cross the ball to our two talented forwards so they can do what they're paid to do. To that end, Nick Epifano seemed re-energised after his lacklustre finish to 2013 - here's hoping he can maintain that kind of intensity.

Lujic should have buried the game just before halftime, but at 2-0 and controlling the game, things were looking up, and it was a long way from my hands going numb with nervousness at the start of the game. Conceivably, only complacency or a Daniel Vasilevski free kick could pull it back for the Bergers. His one chance in dangerous free kick territory went wide, and while we eased off the gas in the second half - which was as dull as the first half was exciting - we were never threatened, with Jason Saldaris' positioning nullifying their efforts fairly easily.

Towards the end of the game, Jamie Reed, who was third in line as a cross came in from the left, somehow ended up nodding a simple chance home. Three dire defending efforts from the home team gave us the goals, but on the balance of play we should have won comfortably anyway. How this performance will be viewed will only be seen in hindsight, because without any doubt there are many tougher opponents waiting around the corner.

But at this point in the season, and in a derby game no less, you take the three points, have a coke and a smile and shut the fuck up.

Celebrities of all kinds (highbrow, middlebrow, lowbrow)
Turns out the father of one of the hosts of SMFCTV grew up with Alan Duff, the writer of Once Were Warriors. That was just one of many talking points as we discussed teaching methods at tertiary institutions.

Also caught up with Philthy Phil (a rare soccer attendee, being much more of a footy fan), a friend and colleague of myself and Ian Syson (who was not there for some reason). Phil was also my first tutor at Vic Uni back in 2007 - it's fair to say that if it wasn't for him, I probably would have failed uni for a second time. Among other things, we discussed the forfeiture of working class identity via education as presented in Australian literature, with an emphasis on Tsiolkas' Barracuda and Ashton's The Danger Game.

But the most bizarre incident was something my buddy Gains overhead while waiting in line for a souv (and what an unnecessarily long wait that was), with two boys talking about how they listen to the SouthRadio podcast, and how that 'Griffin (aka Steve from Broady) guy was the funniest'. Ladies and gentlemen, we have a created a monster. A deal with Harry M. Miller can't be far away.

'He's George Katsakis, and he wears what he wants'
Thanks to the Heidelberg coach's fashion sense, that bloody chant about his cardigan has been stuck in my head.

Next week
League action takes a break after just one round, with a likely very tricky tie away to Sunshine George Cross in round four of the Dockerty Cup. Date, time, location to be confirmed.

Public transport
Well, we missed the 5:41 bus, so ended up taking the old 251 straight to Northland shopping centre. Pleasantly surprised with its drop off point, which is closer to the back of that complex, meaning you didn't have to negotiate your way through all the stores.

A pity that it doesn't run past 9:00 though, so we ended up going with our regular Smartbus option. Took all of two hours for me to get home.

NPL Victoria games on radio
FFV will be broadcasting one live NPL match per week via web radio, on Friday nights. I'd like Friday to Monday coverage (they could even drop down to NPL1 games). but it's a start. The address to go to is livecast.com.au. Apparently there's also an app you can download, as well as being able to tune via the TuneIn app.

Among others, Mark Boric reckons it's not a bad production. I had a listen to the Knights - Northcote game while I was at Port Melbourne, and my thoughts were it could probably could use one less special comments person. I like Teo Pellizzeri's style, but the around the grounds could be a little more interactive - something along the lines of the early 1990s AFL radio broadcasts, where they would call different people at each of the grounds.

Steve From Broady's Canteen Review
Sad to say that Steve is not going to be providing his canteen reviews for the blog this season. They'll now be available exclusively on the South Radio podcast, which you can access via the official site.

New website
Looks like the official South site got a long overdue facelift. Same site address of course. Looks a bit bloggier (don't judge it by South of the Border's aesthetics, or lack thereof), but in a good, modern way.

Speaking of which...
Remember that letter from Hugh Delahunty I put up last week? The club has issued a media statement in response on the official site, which reads as follows.

South Melbourne FC wishes to inform its members, supporters and sponsors of a letter from the Minister for Sport and Recreation published on the South of the Border website.

As the Minister maintains in his letter, all parties are working to finalise the lease. The letter sets out the government's position which it has also put to us. We advised as much at the AGM when we informed our members we had not signed the lease as it did not contain a term of 40 years on which the club continued to insist as it says this was an agreed term of the MoU. The club negotiated the MoU with the previous government and is looking to finalise the lease as soon as possible based on its agreement with the government when it signed the MoU.

The club obviously does not wish to enter into ongoing public discussions about a matter which is currently being addressed by the parties and their lawyers and will provide further information to all members shortly.

She said she was young, and needed the money! 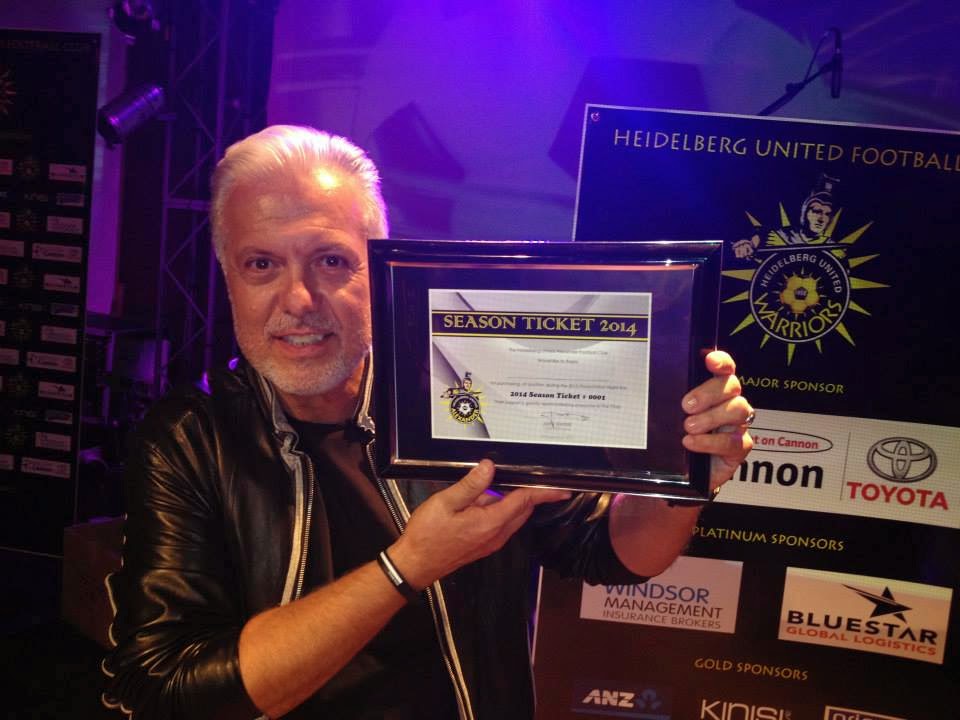 Pimping for Melbourne Heart is one thing; this is quite another. To be honest I could be angrier, but George Donikian wasn't even at the derby, preferring to be at some film premiere instead.


Around the grounds
Headed out to Port vs Dandy last night. Port weren't brilliant, but probably deserved to find themselves 2-0 up after half an hour. Then out of nowhere Thunder somehow pulled two goals back in the space of about five minutes. The second half was more meh. They tell me that ex-South player Anthony Giannopoulos cleared one off the line at the other end. Right in front of my group, he was felled in the penalty area late in the match - it looked like a pretty clear penalty, but the ref who wasn't far away from the action waved play on. It finished all square. Both teams looked better than I'd probably have given them credit for, but neither will be challenging for the title. Chicken souvlaki was bland.


Final Thought
Thank goodness there's some actual competitive soccer to watch again. After all the crap, people seem to keen to just get out to the games. Here's hoping that momentum can be maintained throughout 2014, even if it is just a coat of paint over the same structure.
Posted by Paul at 15.3.14