It's not how, but how many, right? Port Melbourne 2 South Melbourne 3 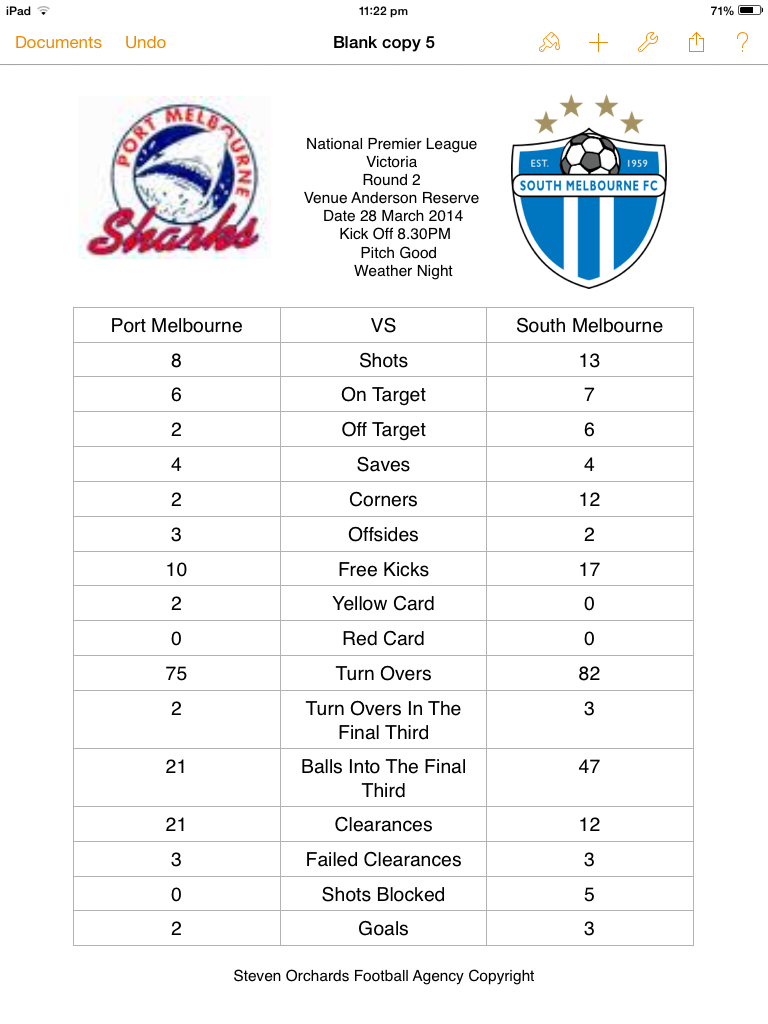 That first 20 odd minutes, it looked like we would rip them apart. And that last 15 minutes, kinda the same. The in between part though is where we almost came unstuck, and that's something we're going to have work on, because there will be opponents this season who will not be as defensively suspect as Port have been so far this season, who will manage to contain us and who we can't allow to make the most of limited opportunities when we decide to step off the gas for 20 minutes in the middle of the game, thinking we have control.

There were, I think, some surprises with regards to selection, with Norton and Tsiaras picked ahead of Mullett and Musa. Minopoulos was back on the bench with Lujic starting. Anyway, those first 20 odd minutes, we looked shit hot, shots coming in, blocked, hit the post etc. We eventually scored when Brad Norton's low cross from the left was bundled in for an own goal. And then we kinda lost our way a little, as Port started working their way into the game.

And then we copped the goal we probably, maybe, kinda deserved to cop. Now, from my angle (a lousy one), eyesight (usual lousiness), and attention span (always lousy, not helped this time by having my mate Chris Egan over from Perth, as we were talking about all sorts of things that had little to do with the game), it looked like a pretty cheap goal to conceded. Those who did see it more clearly than me put the blame on Nick Epifano for a piss poor effort in trying to get the ball clear after a Port corner.

Anyway, 1-1 at halftime sucked, but worse was to come. All of a sudden Port were controlling the midfield, and their defence were all over what had become quite pitiful South attempts at going forward. Soon enough they had the lead, with former South winger Kamal Ibrahim - who has a looked a lot better in these first few weeks than anything he managed to produce at South, which says something perhaps for a player maturing, though of course there's also another 20 odd games to go, so who knows how he'll end up - finishing a dazzling team move, full of speed and quick movement of the ball.

It was at around about that moment (or perhaps the half arsed attempts at wresting back the initiative immediately after that) that
I thought we were fucked, 'scuse my French.
Thankfully, the entrance of Leigh Minopoulos managed to change the momentum of the game again, as we started pressuring Port again and getting into dangerous positions. Minopoulos took a shot which took a massive deflection and sailed over the keeper's outstretched arm and underneath the crossbar into the back of the net. If nothing else, it was a just reward for having a go.

All of a sudden we were all over Port, as they seemed to tire and become dare I say it a bit nervous as well. We blew a few more chances because we just wouldn't take that damn first time shot, but Minopoulos eventually completed his super-sub routine when he cut in well and placed the shot out of the Port keeper's reach. We managed to hold on, and the rest as they say, is history. Of course there's only so many fightbacks a team can make during the last 15 minutes in a season, but three points is three points is three points.  Having said all of that though, credit to both teams for putting on a good show, lots of attacking flair, worlds away from the Bergers-South long ball fest.

Next week
Gully away. Surely we couldn't win two in a row at that ground?

Nick Jacobs retires
I was very disappointed to hear confirmation of the retirement of young forward/winger Nick Jacobs, due to ongoing issues with injury. A week after scoring the winner in this memorable match against Southern Stars, a broken leg while playing for his school has seemingly never quite healed. All the best to the young man for whatever his future holds.

Still, some choose to do so, and I'm not going to criticise those who listen to a footy match while the soccer is being played in front of them, and maybe exhibit an over-exuberant celebration of a hard fought win - not least of all because I've done it plenty of times myself. Nor will I admonish FFV radio match commentator Teo Pellizzeri for making a tweet variant of that behaviour. But it just goes to show I think how people are able to blend their love of both sports into the one experience. Away from the sometimes boorish code war rhetoric, most people just get on with doing what's in their hearts. It's perhaps a very Melbourne soccer thing to do, having no idea if rugby league loving soccer fans do the same north of the border.

South Radio and TV
After a very patchy first episode, episode number two for 2014 of South Radio was actually quite good, and not just because South of the Border got a mention for its hard hitting investigative report into the crazy antics of George Cross goalkeeper Robert Santili. It looks like they're going to have weekly player interviews as well, starting off with Tyson Holmes last week. The TV show's new segment 'Minute with Mala' seems to be a promising new direction also.

Around the grounds
Part 1 - Sweet VFA
On Saturday arvo I somehow ended up at Coburg's City Oval ground for the clash between the newly standalone Coburg Lions and Port Melbourne. By somehow, I mean Chris Egan wanted to go there instead of Vic Park or the Morris Street Oval. First time for me seeing this ground outside of an ABC TV broadcast. I was aware of the concrete terracing, not so much of the odd grandstand (dating back to 1925 - should have taken a photo) with two thirds of its capacity closed off to the public.

The crowd was around 600 I reckon, and about 3/4 of them I guess would have been Port fans. Memberships were being sold at the astonishingly low rate of $55 for an adult (normal entry is $10 for an adult, so we're talking half price for the season).

Inside the clubs rooms there were separate trophy cabinets for the footy and cricket sides, as well as a lot of bluster about being standalone and being off for it, but whether it actually leads to a revival of the club's fortune's on and off the field remains to be seen. For the sake of history you'd like to be wrong, but I can't see Coburg surviving for long, even if all those sponsors stick around.

Funnily enough the electronic clock next to the footy scoreboard - there's a separate one for cricket I think - wasn't working, even though it was sponsored by the Electrical Trades Union. Anyway, the game itself was pretty ugly, but at least it was close until halftime, before Port realised they weren't completely awful and kicked away in the last quarter to win by 12 or so goals.

Part 2 - (State League One North-West) Struggle Street
Sunday arvo was spent at Ralph Reserve, home of Western Suburbs, as they played host to Altona East in the opening round of state league action. The league structure for this division looks a lot like last year's State League 2 North-west (which on the whole, was generally rubbish), but with the addition of the formerly state league 1 Western Suburbs and Altona Magic.

With the exception of ex-South, ex-George Cross and most recently, ex-Altona East midfielder Andy Bourakis, Suburbs had a very young team. East was better off in that department, but man did they make hard work of this game. There were few chances for either side, but eventually a calamitous error in their own box saw Suburbs gift East a goal in the first half.

The second half was more of the same really. East hit the crossbar from close range, and I feel weren't seriously tested going the other way. In the end, one goal was enough in what is expected to be an otherwise tough season for East. The souv was excellent, chips on it without asking, and a bit of fresh parsley in the salad as well, which was a nice touch.

Amount of times that I was mistaken for a North Melbourne fan on Friday because of my scarf.
1.5 (it's complicated). Season tally, 3.5.

The size of Steve from Broady's stats and video posse
At least three people. This is disturbing in the sense that what started off as a gimmick at the Altona East reserves in 2012 in exchange for a passing grade and free souvlakia, has now become a faction at the club in its own right. In a couple of years time he'll have a large enough group to actually run a rival ticket in the elections. Hey, if he manages to get us a social club...

The approximate moment I wrote off our 2014 league season.
Probably around 68 minutes into this game. Leigh Minopoulos managed to win me back for the time being. Fickle much?

Whoopsadoodle department
You may recall that last week we noted that Oakleigh was one of the more notable casualties of the Dockerty Cup fourth round, losing to fellow NPL side Werribee City. Well, it turns out that Oakleigh didn't realise until after the game that the Dockerty Cup doubled up as qualification for the FFA Cup.

Cannons coach Miron Bleiberg fronted up SEN 1116 to make the revelation, claiming he (and I assume by extension, the Oakleigh committee) thought they were two separate competitions with no relation to each other. I'd sympathise with their predicament, except that:
Final thought
Here is the crux of the matter, and I come back to the case of learned theology. For whose sake is it that the proof is sought? Faith does not need it; indeed, it must even regard the proof as its enemy. But when faith begins to feel embarrassed and ashamed like a young woman for whom her love is no longer sufficient, but secretly feels ashamed of her lover and must therefore have it established that there is something remarkable about him - when faith thus begins to lose its passion, when faith begins to cease to be faith, then a proof becomes necessary so as to command respect from the side of unbelief...

Soren Kierkegaard, Faith and Subjectivity
Posted by Paul at 30.3.14