Firstly, a confession. I had lined this slot up several weeks ago for a patented South of the Border self-satisfying stylistic splurge, in particular, writing this game up in the manner of a match report found on the online game Hattrick. However, due to the following reasons
it's not going to happen today. I'm still hoping to pull it off by the end of the season, because goodness knows I need something to distract me from this mess we're in, hopefully combining it with a Hattrick Press piece. But that doesn't concern the majority of our readership, so we'll move on to this week's match report. 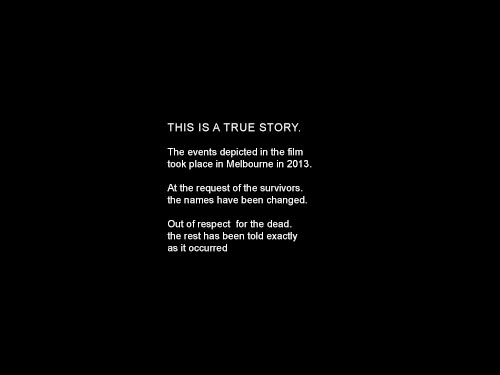 Close your eyes. Clear your mind of all thought. Now think back to an early memory, perhaps round 2, 2013. What happened that night? Were you head and shoulders above your opposition? Could they even get out of their own half? What were your expectations for the rest of your season? Where do you think you went wrong?

I can see fingers being pointed everywhere, by everyone. This is a situation that will not be easily resolved. We are far removed from the cost-cutting era when the club was doomed, and thus there are fewer excuses for what has happened over the past one and a half seasons.

Brother Frog started the match much to the surprise and disdain of a lot of people. He did some nice things, but it was obvious he could barely move, and his confidence in front of goals is shot. He was subbed about a half hour into the game. With him or without him, the game plan seemed pretty clear: play on the wings at all costs. Houston got a lot of the ball out on the right, but the end product wasn't there. It didn't help that he kept slipping over as well. Wear the right boots, please! 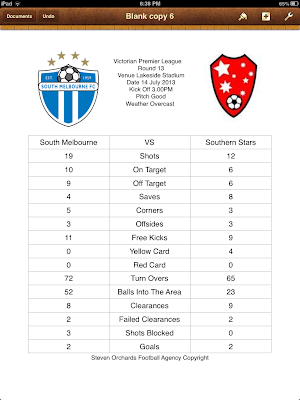 To be fair, Stars looked about a billion times better than our first meeting with them in 2013, but considering they'd put in a performance close to soccer's absolute zero in that game, anything other than not leaving the warmth of the team bus would have been an improvement. As it was, they attacked and generally had a red hot go. Equally, it didn't help that our season has been like a four year old staying up for New Year's - a lot of promises at the beginning of the evening about seeing it through, only to get drowsy by 8:56PM before falling asleep on the couch.

We can't even use the excuse of 'if only we scored first', because we actually did. The opening goal was quite stupid. What looked like a fairly routine catch from a cross was instead punched out by the visitor's keeper, with the ball falling to the edge of the area at the feet of TWO of our players - believe it, because it's true - and just when you thought that we'd find a way to butcher that chance of a lifetime, Toffee For A Few Minutes took the initiative and scored the goal. OK then, I thought, not sure we deserved it, but we've got it, surely we should be OK now, at least until halftime.

And that is why I'm an idiot who knows nothing about football, and who rightly gets castigated for that pretense of knowledge by those who have the guts to call it as it is, even if I have a massive sook about it to my fellow internet warriors. Because instead of going into the halftime break with a narrow if not necessarily deserved lead, we went into the break 2-1 down.

Quite how it happened is anyone's guess. How does an opposition player beat two defenders by running in a straight line? The shot - if it was a shot, and as if that really matters anyway - was a cracker, right into where the spiders live. The second goal was the result of utter confusion as the Stars - who have not won a game all season - made the most of what passes for defending at South at the moment by scoring their second about a minute after scoring their first.

The Stars didn't back off in the second half, and only some good saves from the Princess kept us in the game, until Pops came on after about an hour and changed the course of the match. Aside from perhaps the Princess and The Kid at centre-back, Pops was our best player by some way. It's sad that a player that I watched come through the VPL ranks back in 1996 is our best player in 2013. Pops scored a tap in, and the last twenty minutes or so had the makings of this game, but alas, no such reward this time.

We all walked out disappointed, but the next game is not too far away. More signings have arrived. The Coach reportedly wants to turn our dressing room back into a dressing room instead of being a social club, and more power to him. Whatever works. It takes time. 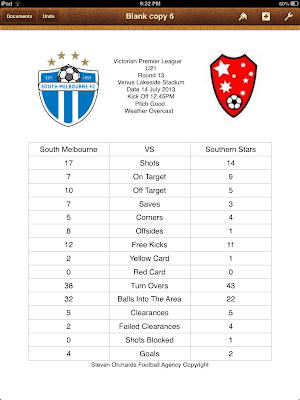 Steve From Broady's Under 21's Match Report
South Melbourne's under 21s took on bottom of the league Southern Stars on Sunday afternoon. South looking to bounce back from the last three week's horror performances started off the first half in convincing fashion creating lots of opportunities. In the 33rd minute South finally took one of those chances when Anthony Giannopoulos in his new position of left back ran down the left channel, cut in and fired home to score South's first goal in a month. Seven minutes later Baggio Youssif was played an excellent through ball by the centre mid and he converted convincingly to give South a 2-0 lead.

The scoring was not done yet for the first half - in the last minute of the first half Lajos took a goal kick which flew down the other end of the ground and bounced in front of the keeper, and a lack of communication between the centre back and goal keeper saw the ball go over the keeper, and as the keeper turned he slipped as did the centre back, Baggio made the most of both players slipping and cracked the ball into the back of an empty net, 3-0 to South Melbourne was the score as the teams went in for half time.

Southern Stars come out strong at the start of the second half and were rewarded in the 66th minute when their front man headed home from a corner to get a goal back and make the score 3-1. Southern Stars heaped on the pressure for the next 20 minutes trying to salvage a draw from the game but their hopes were crushed when Baggio completed his hat-trick in the 83rd minute, having the ball played through to him by Solano and finishing nicely in the bottom corner to make it 4-1 South. Southern stars scored a consolation goal in the final minutes to make the final score 4-2 to South Melbourne.

South will have their work cut out for them next week playing the high flying Bentleigh Greens, until then cya next week.

Steve From Broady's Canteen Review
South Melbourne's food van was in the spotlight again this week trying to get some consistency with their souvs and they did with their best souv of the season. Beautiful meat and just the right amount of Tajikistan sauce, the meat was excellently portioned as was the salad and with the souv being in a pita a massive score was undeniable. I give this week's souv a 9, just falling short of perfection, until next week get around it.

BIG NEWS IN TWO WEEKS!
The old 'big bombshell tomorrow' craziness has been supplanted by this thing doing the rounds at the moment. I even heard a variation of it at a christening a month ago. What is it exactly? Big A-League news? Are we South Melbourne Heart yet? Death of the FFV?

It's Going To Cost Me How Much?
Have a look at this MFootball article on how much some clubs think the NPLV will cost them. I like the fact that the relevant clubs are doing their homework on this, even if it has elicited more holier than thou grandstanding from North Sunshine.

Neos Kosmos
Neos Kosmos has stopped calling us Ελλας, instead referring to us as Σαουθ Μελμπουρν or some such, while still using the traditional names for teams like Northcote and Port Melbourne. Good for them. Good to see they still have a sense of humour. They'll need it when The Rapture comes.

Next Week
Bentleigh at home. Not expecting much from this game. Come on South, surprise me.

Quote Of The Day
There are ten players out there for South called 'cunt' and one called 'Andy'.

Final Thought
Let the record show that the witness made the 'drinky-drinky' motion.