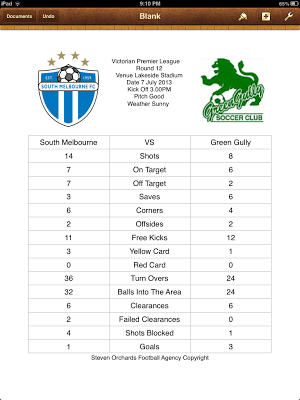 You miss a week and end up missing so much. It's not just missing the actual game – being in a situation where I had limited forum and Facebook contact for a week does something to you. Being away in Canberra for a week - my first interstate trip since 1999 that had nothing to do with South -  was both alienating and refreshing.

For a bit of background, I check this site's stats every day, in part to see how recent articles are doing, and in part to see if some old article gets unusual attention. I visit the various forums I'm on several times a day, to laugh, to learn, to be horrified and occasionally contribute my limited wisdom.

So even though I don't spend much more than one day a fortnight at Lakeside, I've become obsessed with what people say and think about South, from inside and outside the club; positive and negative; those who are obscenely ignorant and those who are perhaps too informed about any given situation, and who use that knowledge to lord it over everyone else.

So I rocked up to Lakeside with a sense of dread competing with a sense of low expectations. Some sort of talk had reached me that persons on the committee were unhappy with the fact that the timeline comment had appeared on this site. Somehow I managed to avoid any confrontation with committee persons on that matter (unusually perhaps by sitting in the same spot I usually do; or maybe the displeasure rumour was overstated), but it is a fact that the committee weren't the only people who were unhappy with that post seeing the light of day. Considering the forum response to that comment, several people seemed to have received much the same information.

Then again, there was talk that people were displeased that in his match report from last week, Gains mentioned that Tsolakis was unshaven, when it was completely obvious to everyone. Go figure.

I'll return to abstract navel gazing in a moment, because we did actually play a match yesterday, and it would be remiss not to mention it at least in passing. I didn't have any major expectations. Rightly or wrongly, a pall has been cast over season 2013. Still, in the first half we gave it a good shake. We went behind due to some poor marking, but at least went into the halftime break level, and perhaps even playing the better football. Vlahos' goal from a free kick was sensational, but it was also atypical. We had four or so one on one chances, but did nothing with them.

The second half wasn't as crash hot. Our defending was pretty dire - all three goals stemmed from some sort of poor marking - but people having a go at Peter Gavalas are probably guilty of erecting a strawman to take down. Indeed Gavalas had what I thought was an excellent game. The atmosphere at the ground became deflated at 3-1, and never picked up. Injuries to Gasparis and Tsiaras didn't help matters either.

We're back to that sense of familiar mid-season gloom of our VPL years. No amount of money, coaching changes or transfers has been able to change that trajectory, though just for the sake of it I'm going to maintain a candle of hope that something may happen this season. Otherwise, we should focus on blooding a few younger players, re-building some dressing room camaraderie and try to make the most of our cup run.

On the plus side, this collapse in form and morale has allowed us to participate once more in one of our favourite bloodletting games. Players that were quick are now too slight. Those that bullied the midfield now have no skill. Veterans are no longer experienced, but just plain old. Youngsters no longer full of promise. Inconsistency and upheaval and even the TV show blamed for our decline, when Green Gully has sacked coaches and had TV shows and still won championships. Games that we were perhaps unlucky in are now being pored over for signs of the decay setting in before most of us - including myself, though obviously not those with friends in high places - were surprised by the apparently sudden departures.

Leonard Nimoy: A solar eclipse: the cosmic ballet goes on.

Man sitting next to Nimoy: Does anybody want to switch seats? 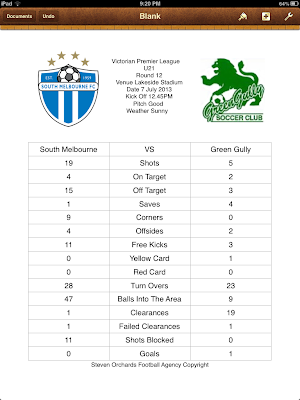 Steve from Broady's Under 21 Report
South Melbourne's under 21s started the second half of the season with a home match against Green Gully at Lakeside Stadium. South's squad was depleted with five players going up to the seniors and a few players out injured, forcing South to promote a fair few under 18 players. South with another new face in goals kicked off. South dominated the first 20 minutes could not get any of their shots to count, blasting most of them wide.

In the 23rd minute Green Gully had a free kick on the edge of the area - the Gully captain stepped up and fired the ball low across the area with the ball finding its way past everyone's feet and into the back of the net, South giving another soft goal away and making a habit of going behind early this season.

As the first half went on South continued to dominate but could not get anything on the scoreboard. The teams went into the sheds at half time with the score 1-0 to Gully. South dominated the whole second half and still could not score. 1-0 it finished to Gully. South's 21s are having a poor season to date and in my opinion you rate the coach on two things in youth football. Firstly results, and secondly player development. And unfortunately South's under 21s coach has failed in both areas. Results are shit and players are getting worse each week. I have talked to reserve players and they have confirmed what I have thought for weeks that the expensive Brazilian coach is teaching them nothing.

The time has come to call for the coach's head. Anyone could have got the ressies 1-0 losses to Gully and Port; why do we need some overpaid Brazilian coach to do so?
Steve from Broady has spoken! SACK THE OVER PAID BRAZILIAN COACH!!!!!!!!!!!!!!!!
Steve from Broady out for another week.

Steve from Broady's Canteen Review
South Melbourne's food van was in the spotlight this week trying to improve on their sub par effort from last week. And they did marginally better with a nice solid souv, nice pita that was not hard as a rock this week, lots of meat gets them a 5.5 souths food van going with the "just tap it in approach" will they eventually get a 10, only the food gods know, until next week get around it.

South's NPLV Statement
Last week, amid the continuing fallout from the various sackings (sack the board, sack the fans, sack the bloggers, yada, yada, yada), the club released this statement on our NPLV discussions. To be honest, it's not a seismic shift in attitude, even if some Melbourne Knights fans got their collective holier than thou rocks off upon reading it. It certainly doesn't say that we've pulled out of the NPLV process.

The real shock here is, which no one in their rush to react in whatever pro or anti board stance that they had sitting in the cupboard noticed, is that this press release conforms exactly to what South's committee had said they would do:
Θα χαλάσει ο καιρός and all that.

3XY Last Night
Apparently there was some more action on that front last night. Didn't listen to it. What happened?

Anonymous
Yesterday a concerned reader asked me who the commenter listed as 'anonymous' was – with particular reference to some of the posts seen in the recent players gone post. I told him what I tell you now – if and when people use non-Google accounts to post comments, then even if they use a handle of their choice, they are still more or less entirely anonymous, without any way of me finding out their identity.

It's sometimes difficult to balance out the concerns of newsworthiness, posterity and the public record against issues of taste and opinion, among other issues, but I hope that I stay on the right side of the line as much as possible. There are very few comments that I have ever blocked, though at one time I did allow comments only from registered users. That was because things were getting particularly nasty, and I really should have cracked down on that issue a lot faster.

Still, as much as I'm responsible for giving final approval to all comments published on this blog, some of the responsibility for that content does fall upon you, the reader who decides to contribute. There are people who use this site to put forward opinions on behalf of one agenda or another, and that's fine, even if I wish people were more open about their identities.

Thus far into the blog's history, comment section discussions, where they have existed, have been for the most part civil, even when they've been passionately disagreeing with alternative positions. I'd like to see that civility maintained and where possible, for commentators to add in some sort of marker, not perhaps to identify yourself outright, and but to at least create some sort of persona so that we can trace a continuity throughout the blog's lifespan.

The Scoreboard
Just for a moment there was video on there, of the game itself being played. That's an interesting development.

Next Week
Southern Stars at home. This could be fun.

Final Thought
People are still asking me what the state of our A-League ambitions is. Either hope springs eternal at Lakeside, or we're tiring of waiting for deliverance from this separation from God among the other ethnic heathens.
Posted by Paul at 8.7.13