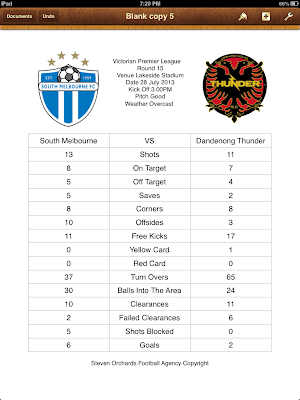 Our now former coach Peter 'Gus' Tsolakis had said throughout the 2013 portion of his coaching tenure, that one day we were going to absolutely batter a team with the amount of chances we were creating. It didn't happen, and there was that much batter being stored that we could have opened up a fish and chip shop.

While initially I wanted to believe in the promise of hammering some team, as the weeks went by and it still hadn't happened, even Tsolakis had stopped believing it. Witness for example what turned out to be his final post match interview - unshaven and tired, he pulled out the battered line again and it was obvious to all that he was working on autopilot.
And then yesterday it actually did happen. That first ten minutes was chaos. Three goals, all to us. One almost a carbon copy of what had happened the week before, with Epifano oppoing up at the back post. The second was Rixon's first goal of the season, a tap in from a spilled shot, but who's counting? The third a Bran header from a corner. And yet, why did I have the feeling that the game was still up for grabs?

Perhaps because, apart from our seemingly inherent weaknesses, Dandenong are, despite the pillaging of their playing stocks (admittedly mostly by us), still made up of some decent players. A perfectly hit corner helped make it 3-1, and from there on the fact that we were one bad decision or a keeper injury away from the game being a contest again was on the books.

And what do you know, almost both of those things happened soon after. The penalty given away by debutant keeper Chris Maynard was beyond a joke. But joke or not, it was slotted in well and it was 3-2 all of a sudden, with Dandenong well and truly with the momentum. Steven Topalovic was a beast in the middle, and when Maynard got hurt in a desperate attempt to prevent Thunder from getting the equaliser, it looked like we were moments away from having Fernando de Moraes, our nominal back up keeper for the day, being brought on to take up the role between the sticks.

Still, Maynard played out the game, and we managed to make it to half time without conceding another. The second half was much of the same, both sides playing on the edge of the offside rule, but neither able to get the next goal. Then Zaim Zeneli, the former South keeper, he of the heroic double save against the Bergers in the elimination final back in 2011 which saw us a break a run of five years of not beating that mob, made a howler of epic proportions.

Going to throw the ball out wide, the ball slipped out of his glove, into the path of Rixon, who chipped the ball back over Zeneli's head to make it 4-2. As much as I cheered the goal, and as much as I gazed on in astonishment at the error, I did feel bad for Zeneli in a way I probably will never feel for Gavalas, and I'm not sure why. Something to talk about with my therapist, perhaps.

Despite that goal Thunder persisted, but seldom tested out Maynard. Topalovic was nowhere near as effective in the second half as he was in the first - maybe we started playing the ball away from his sphere of influence on the field? Our raggedy defensive line diced with death and the offside flag several times, but Bran more or less had Nate Foster under wraps in the second half.
And when Epifano scored his second for the match after intercepting a slack square ball across the back, and sped away with (cliche alert) blistering pace, the game was well and truly done. Brad Norton added to his already impressive tally of goals this season by finishing off a pinballesque situation in the box, and all of a sudden it's 6-2, we're a little less morose, the Thunder fans' anger at their traitorous players is but a demoralised shadow of what it was at the start of the fixture, and maybe we can make finals?

Were we more direct? More clinical? Takimng advantage of a side that's been through a different kind of hell in 2013? Is Rixon now officially 'in form'? Are Epifano and Bran the greatest things since sliced bread? And how quickly will we turn on all of them if they can't get all three points against Richmond this week? I think that's a question that we can answer. The rest, that's for you people to mull over. 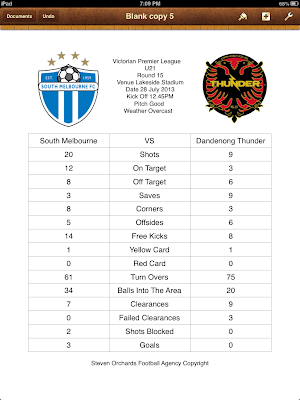 Steve From Broady's Under 21s Report
South Melbourne's under 21s were at Lakeside Stadium for a fifth week in a row, as they took on Dandenong Thunder on Sunday. South, looking to go three in a row, had made a few changes most notably in goals with Lajos injured, a new young keeper come in between the sticks. South kicked off and it was clear early on in this game was going to be a tight affair, with both teams' chances coming few and far between. In the 43rd minute Baggio Yousif broke the deadlock as he fired home from inside the area to give South a 1-0 lead just before the half time break. The boys came out firing in the second half and the game started swinging South's way. In the 65th minute Baggio scored again to double South's lead and to bag his 8th goal in 3 weeks. 3 minets later south was through the dandy defence again and zinni fired home to wrap up the 3 points for south the game finished 3-0 to south and the boys in blue march on now to Richmond away on Friday night looking for a 4th win in a row.

Steve From Broady's Canteen Report
South Melbourne's canteen was on show for a fifth week in a row. I was back at South's food van this week and I had a souv - it was quality this week. It helps when the souv doesn't break and lamb goes everywhere like my souv did on Tuesday at the cup. Today's souv was quality made in front of you, not sitting on the bench for two hours. Everything was quality about this souv, so I give this weeks souv a 7.5. Away to Richmond next week, will their canteen be able to handle the pressure? Only the food gods know, until next week, get around it.

Renco Van Eeken Fruit Watch Baggio Yousif Junk Food Watch
Was seen eating chips after the 21s match. Fascinating stuff. What else can we do when no one was looking out for Renco this week?

Seagulls
Where the hell did they come from yesterday? Felt like it was halfway through the last quarter at an MCG footy match. Eerie.

Final Thought
Always unsatisfying to be doing a rushed post due to having other commitments. Hopefully something from us on the rapid developments regarding the NPLV, but absolutely no promises made on that front. Damn ethics and integrity class.
Posted by Paul at 29.7.13