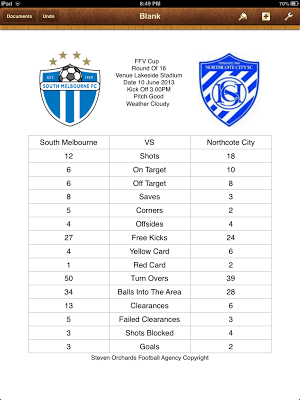 This was a game that had nearly everything. It was characterised by open, attacking football from both sides. There were red cards, there was blood, and there were heroes and villains in abundance. And there was even mass confusion on more than one occasion.

There was tension on and off the field, both during and after the game. If you weren't there, or if you left early for whatever strange reason, then you missed one of the more entertaining games you're likely to see this season. The good thing is, I suppose, that you can catch up on at least some of the goodness on SMFC TV.

The other good thing is that we won.

Call of the year so far
Directed towards the Northcote goalkeeper, who was wearing a fluoro green jersey and shorts, with black socks: 'You look like a highlighter!'

A false start of sorts
Northcote launched a free kick into the box, and saw it headed home, for what looked like on first impression a legitimate goal. But the linesman on the far side had raised his flag straight away, and the effort was disallowed. To be honest, I can't really say for sure either way - my hunch however is that it was a goal. I'm not sure the video will be conclusive, but we'll see.
﻿﻿﻿﻿ ﻿﻿﻿﻿
There will be blood
While the officiating was often pedantic, some of the players didn't do themselves any favours. Shaun Kelly's head was busted open halfway through the first half, and blood poured forth from the wound. He soldiered on, with the kind of bandaging that every well proper central defender wears with pride. Unfortunately, he wasn't able to continue, and was soon replaced by Matko Budimir.

That wasn't the end of the carnage though. About 30 minutes in, Alan Kearney, having his first start after several weeks off with injury - although he did come off the bench last week - was sent off for an off the ball incident with a Northcote player, who was also sent off.

Northcote were the better side in the opening half, and seemed to adjust to the more open spaces better than South, often finding wide men in space. This was especially so on our left hand side. Any hope of surviving until halftime at 0-0 and then re-organising went out the window when Northcote justly opened the scoring, with Milos Lujic tucking away the mess of South's attempt to clear their lines.

The second half
It's fair to say that we were the better team for the majority of the match from this point onward. This is not to discredit Northcote, who still kept looking for their second goal, but the stats in this case are perhaps a little misleading. While we didn't get that many shots on goal, the fact is that we should have. Our counter attacks in particular went unrewarded so often that it was maddening. Our refusal to shoot was only part of the problem - the major issue was not even being able to hit a proper cross where a striker could run on to it. The balls into the box would elude literally everyone, like, literally.

At last though, Rhys Meredith cut in and curled his shot around the keeper from the right, and it was 1-1, and the game's momentum was clearly with us. We kept peppering away, and subs were even made before the 85th minute -Trent Rixon off and Andy Vlahos on turned out to be a pretty important decision. Fernando De Moraes also got onto the field, to a massive cheer from the faithful, though I'm not sure if he or the coaching staff were expecting him to end up playing 50 minutes rather than a pinch hit 20 at the end.

It was the best of times, it was the worst of times
I reckon Peter Gavalas has had a very good season. So much so, it's like having an entirely new recruit. And in this game, he actually played well, coming off his line and making some fancy diving saves, until late on during regular time when he tried being way too fancy at exactly the wrong place and time. His attempt to play around James Kalafatidis failed dismally, and gifted Northcote the easiest of finishes for 2-1.

At that point we were all having horrible flashbacks to 2012. Thankfully, for everyone's sake, Andy Vlahos, probably the shortest player on the field, somehow got onto the end of a free kick launched into the box and headed it home. And believe it or not, that's when this game started getting really interesting.

And it finishes 2-2, we'll see you again next week...
A lot of people at the game didn't seem to realise that this was a cup match, and that as a cup match in the modern era, we were not going to have an infinite amount of replays until we had a winner. Maybe some people were walking out to have a cigarette, or put some extra coins into the parking meter, but somehow I very much doubt it.

Great, who's he going to cross it to...
... because to me it seemed like there was no one in the area waiting for the pass. And then Brad Norton, perhaps my favourite much maligned South player of recent times, appears to me as if he's come out of nowhere to put it away and give us the lead for the first time in this match. Cue a fence run of all things, with people running out of the grandstand to revive this once great tradition.
And then the scoreboard shenanigans started. Among the many mistakes - which included an out of synch match clock and listing all the South scorers as 'Goal' - was having Northcote leading 3-2. It did confuse one of the South fans near us who had gone out for a smoke.

There were five in the bed, and the little one said...
This cup tournament allows you to make up to to five substitutions, which is a bizarre sort of situation. It did lead however to Anthony Giannopoulos finally making his senior debut. Long time readers of this blog will recall us banging on about giving this kid a go to the point where people got absolutely fed up, and then we stopped doing it for the good of everyone. ﻿

﻿ Now I admit that I do know the lad, although I only see him on match days, when he greets me with a 'hey, Juniper', which then leads into a Hattrick discussion. While we've never believed he's been the best thing since sliced bread, all of us of a certain ilk at South Melbourne who have watched him for years, both in underage competitions and at Clarendon Corner social football, are stoked that he's finally reached this milestone, playing for the club he loves.

We're just as glad that he didn't get sent off - though it was nervous times when he while standing over a fallen opponent and giving him the death stare!

Post match follies
Did Peter Gavalas flip the bird at the supporters, or was he putting his hand up in acknowledgement of his blunder? Who do we play next, is it Preston? Don't know for the former. Yes to the latter. Waiting for all conmspiracy theorists to appear in 3... 2... 1... 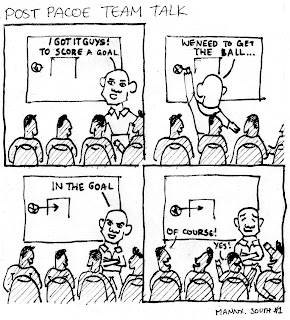 New segment!
One of our readers, identifying themselves only as 'Manny', has sent us this comic as a first offering. Now he's not promising that it will be a regular feature, but I'm glad that someone with the even merest hint of an artistic bent has offered us their services. That brings the current number of regular contributors on this blog up to four, which is kinda insane when you think about it. Any good suggestions about what to call this series are also welcome. It was sent to us last week, so if it feels a little out of date, that's completely our fault.

Around the grounds
I was at the Clifton Park synthetic pitch on Saturday afternoon. Somehow the Moreland City - Clifton Hill match was only the second best cup classic I got to see this week. Footage by Football Chaos. By the way, while I've not seen much of Clifton Hill's goalkeeper Mason Interlandi, what I have seen of him suggest to me that he won't be a state league 2 keeper for too much longer.

Tonight
The Socceroos play Jordan at Docklands. Myself and Gains will be at the opposite end of the stadium to the newly formed and FFA approved Australian home end group 'Terra Australis', but if you do somehow see us in the crowd, do come and say hello.

Next week
Melbourne Knights at home. There's talk that some chap named Ljubo might be starting for them.


Congrats to @smfc today, a great game. Well done to our boys, ready to get back on track in the #VPL this weekend! #Northcote
— Northcote City FC (@NorthcoteCity) June 10, 2013