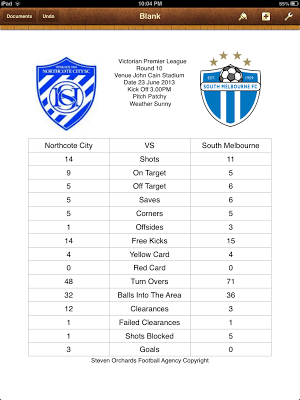 There's no way of sugarcoating a performance like that. When we got beaten 5-0 at this venue by this opponent a couple of years ago, it was with a half strength lineup, plagued by internal strife. Yesterday we had a strong team that was clinically torn apart by an opponent that we had beaten only a couple of weeks ago, making us believe - or me at any rate - that we were a side that weren't too far off the mark as far as season 2013 was concerned.

Initially, things looked promising. In the first five minutes, we looked good. We had the ball, we had a cross go across the face of goal and just out of reach. But for the next 55 minutes - and I say 55, because Northcote put the cue in the rack for the last half hour - we were barely in this match. And, if it wasn't completely obvious, a large part of that has to go down to Northcote, the best team in this league so far in 2013, even if some of our fans still don't rate them as a side.

We were out-hustled and out-muscled. When it counted, Northcote were at almost every loose ball before we were. For a side that has put its stock on a high pressing line, our forward pressure was poor. Several times Northcote were able to escape from the back and move the ball up to the other end of the field with just two or three passes, after we had looked hopelessly for space that apparently didn't exist.

We were beaten tactically. In comparison to Northcote's quick ball movement, we were often stagnant. The overlapping runs of Brad Norton and Tom Matthews, so vital to our success this season, were nowhere to be seen. At times we even struggled to get over the halfway line, and when we did, we were often squeezed up against the touchline. When we tried to play through the middle, we often came up against a solid blue wall.

Structurally we were a mess, and we did nothing to change that during the course of the match. Defensively, we looked to be confused. We backed off opponents, and the communication between keeper and defender was off. Peter Gavalas had a good game, making several saves which prevented the score getting completely blown out, but otherwise we looked reluctant to pressure the Northcote attack.

Some fans were calling for Fernando to come on, and he did during the last 20 minutes. While he did a couple of nice things, he didn't also alter the game in any meaningful way. Let there be no mistake - that period of the game was merely an exercise in killing time. Nando's passing and dribbling was often no better than what had come before his arrival. And if Steve from Broady's stats are to be believed, at 71 turnovers, we were getting awfully close to turning the ball over once every minute.

Not only did we lose this match, but it also took a toll in terms of injuries and yellow cards. Rhys Meredith got a corky, while more seriously, Joe Keenan seemed to injure his hamstring. Trent Rixon missed this game, and who knows how long he'll be out for, nor when or if Renco Van Eeken will be back. I believe Shaun Kelly will also miss this week's match against Port after picking up a fifth yellow card.

We have a tough run of games coming up, but also a lot of home matches. Port, Gully, Bentleigh, Thunder, Preston in the cup, and Stars before we have to head out to Richmond. And I must admit, even I found myself cringing at how after what I think has been a half decent start to the season, that one really bad loss has everyone calling for heads to roll. It's like the good results we've had have been entirely forgotten. Or maybe they can see something on the horizon that I can't. Hopefully it doesn't come to that, and that we don't fall into the trap of our annual mid-season slump. 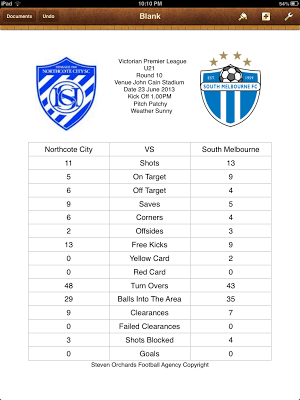 Steve From Broady's under 21s report
South Melbourne's under 21s took on top of the table Northcote City yesterday at John Cain Memorial Park. South, coming off a good win from last week, were trying to get some momentum going as we near the halfway point of the season.

The match kicked off late for reasons unknown. The first 20 minutes of the game was very tight, a shot off target here, a ball into the mixer there. There weren't any good chances for either team to score and at halftime the lads went into the sheds locked at 0-0.

The first 15 minutes of the second half were the same as the first half, tight with neither team managing to find an edge. In the 63rd minute the South gaffer decided to make some changes bringing on Sebit Muon and it didn't take him long to make an impression, when Anthony Giannopoulos played a cutting ball through the Northcote defence. Sebit had the best chance of the game to fire home but the City defender managed to block the shot.

In the last 10 minutes South had plenty of shots at goal but could not make any count. As the clock wound down South had one last push forward, when Sebit found himself in some room and fired a shot from outside the area, only for it to go wide. That ended a frustrating game for South, who probably should have won.

The game finished 0-0 and now we need to look to next week vs Port Melbourne and the five home games in a row what we are about to play - all must win games if South want to fight for the title at seasons end.

Northcote's canteen was in the spotlight yesterday, and they failed miserably. The souv was a shocker, with fuck all lamb, a shit roll that was harder than my cricket bat and no garlic sauce, it was the biggest disgrace since sliced bread. I give this disgrace of a canteen a 3.5, disappointing. 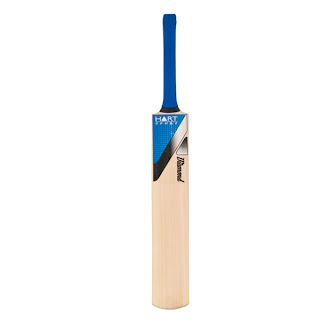 South food truck
Around the Grounds
Took a trip out to Port Melbourne to watch the Sharks take on Dandenong Thunder, the first time I'd seen either of these sides play this season. The first 20 minutes was pretty ordinary, but after that Dandy took control of the game, and they probably should have lead at half time. A slightly dubious freekick early in the second half helped them get that lead. After that I was expecting Port to fight back a bit, but nothing really happened. Thunder's second goal came in injury time, sealing the deal. Thunder aren't the force they were last season, but you'd hate to come up against them in the finals.

Jesus of Port Melbourne was angry for some reason, even before the Port substitutes, who were warming up during halftime, asked him to fetch the balls they'd kicked over the fence. Not sure what the deal is with the far side of the ground being blocked off to spectators either, which is my preferred spot to watch games from at that ground. 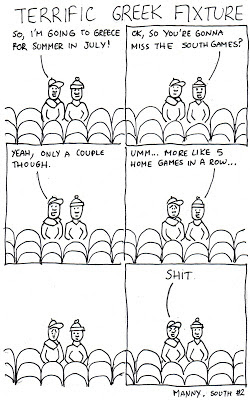 Friends In High Places
Which current South Melbourne player, who happened to be wearing shorts on that freezing Friday night, bought Steve from Broady a beer? Ah, I remember the days when I was the one being bombarded with questions about what was going on behind the scenes. The student has surpassed the master in that regard - not that I was ever told things that they didn't want to get out anyway, lol.

Next Week
Port Melbourne at home to complete the first half of the home and away season. Trust them to fire up for this one. If I'm even later than usual in supplying the entry on next week's match, it will be because I will be driving up to Canberra early next week to conduct some research and to attend a conference. I trust that you will be as patient as you usually are.

Final thought
I have heard unofficially that the Kiss of Death is ready to put out a pretty awol kind of piece this week. My response to that is, we'll see about that, as the Kiss of Death has been pretty scratchy in terms of supplying any material of late.
Posted by Paul at 24.6.13