It's too early for trends, but... - Southern Stars 0 South Melbourne 3 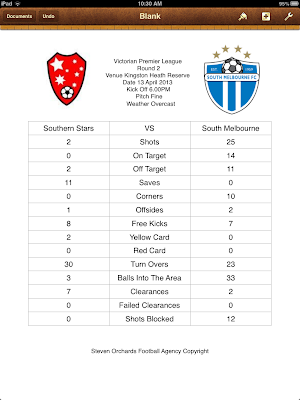 Along with the joy and relief of the win last night - joy for three points and the manner in which of some of that was achieved; relief for not stumbling against this side as we did last year - the acknowledgement that we played against a very poor side must also be taken into consideration. Right from the start, Southern Stars had parked the bus and weren't going to move it. If they could, they probably would have parked their bus at DFO across the road, but such are the petty laws of the game that you restricted to patch of grass about 105 metres long usually not much longer.

They'd done the same against Dandenong Thunder last week, and managed to get a point out of that game. And while for about half an hour it looked like maybe the same fate would befall South, as Stars' goalkeeper and the bounce of the ball conspired to keep the score locked at 0-0. But then Marinos Gasparis' powerful long range shot took a massive deflection, giving the keeper no chance at recovering, and it was 1-0.

At that point, one may have thought that Stars would show some initiative and start playing some soccer, but instead produced more of the same. As a measure of how little Southern Stars troubled the South defence, it took until about the 60th minute for Peter Gavalas to touch the ball last night. Sometimes one is all for the humiliation of an opponent, but at other times even though you want to see your team win and win well, you'd like to see at least some sort of fight from the opposition, to have the feeling that the result was not a fait accompli.

Gasparis' second goal - from what looked like a side footed free kick around a shonky wall - just about iced the game. For whatever reason, South then took the foot off the pedal, and Stars managed to make the odd forward venture, getting close to scoring on perhaps one occasion, but any lingering doubts about the result were put to bed when Shaun Kelly found himself with far too much room at the back post, and scored a lovely scissor/volley into the back of the net.

As much as I spent a fair chunk of last night downplaying the merits of the result, on reflection there were some important things to take out of the game. The high defensive line and manic pressure from the win against Green Gully were there again, but it will be interesting to see how those concepts cope with a team that has the ability to launch quick counter attacks.

Something else to keep in the back of one's mind, is to see how we will cope with falling behind - as well learning to play something else other than the fast paced style. Can we slow it down and still look comfortable? When the game slowed down last night and seemed to be infected by a lack of motivation from both sides, the link up play just didn't have the same fizz and sparkle as when we were going at full steam.

These are the kinds of thoughts of course, given birth by the god of cynicism and the goddess of it's still too early to tell how we'll go this season. 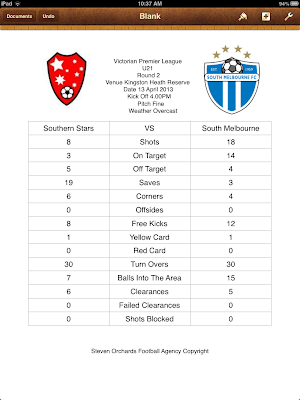 Steve from Broady's Under 21 Match Report
On Saturday night South Melbourne's under 21s took on Southern Stars at Kingston Heath. Coming off their 2-1 loss last week at the hands of Green Gully, the South Melbourne lads started off the game very well, winning several corners early in the first half. South Melbourne looked more and more convincing as the game went on, creating plenty of opportunities for the strikers, but the South Melbourne forwards were unable to convert and the boys went into the sheds at half time 0-0.

South Melbourne started the second half as they did in the first, dominating from the get go and in the 65th minute all the South boys' hard work payed off when Sebit Muon headed home from close range. After South Melbourne took the lead Southern Stars started playing with some more fight, but it didn't last long because in the 71st minute Luis Bulboa scored a cracker for South from long range giving South a 2-0 lead. As the clock wound down Southern Stars looked to have given up and South added to their misery in the 91st minute when Sebit Muon played a beautiful ball to Baggio Yousif to strike home and make the score 3-0 to South Melbourne, and 3-0 it finished to the boys in blue, a well deserved result and a very good bounce back from last week's loss to Green Gully.

Next week South Melbourne will play Bentleigh Greens away at Kingston Heath, with reports that Trent Rixon might be making his comeback from hip surgery for the under 21s.


Steve from Broady's Canteen Review
This is a segment that will appear every week this season rating and ranking the 12 canteens in the VPL. After not eating at Green Gully last week because of a bad experience a few seasons back with a shit hot dog (which automatically gives Green Gully's canteen a 1/10) I had a kebab at Southern Stars this week and well fuck me, another food tactical disaster with the choice of bread by the Southern Stars canteen men and women. It was some sort of white bread roll that I could compare to say a cheese and bacon roll. The salad in the kebab was OK - the lamb was questionable - it looked like rabbit shit if you know what I mean. The hot food looked standard, so I give the Southern Stars canteen a total of 2/10, very disappointing and a let down from last season's kebab that I had there. Next week it's Bentleigh Greens canteen time to shine. There's a lot of hype about their souv - can they deliver on Friday night when the pressure is on?
The Scenic Route
There was track work being undertaken yesterday on the Frankston line, so I decided that I couldn't be bothered changing to a bus at Moorabbin to change to another bus at Cheltenham. Decided to take the Sandringham line out to Hampton, and catch the 828 from there. Took about as long, but you get to see nice scenery as the Sandy train travels along the beach front.

Also had a nice chat with some random who was moving house, talked about such things as racism in society, cultural studies, was sport better in the 70s (OK, that's just poetic licence to play this song), our binge drinking culture, Aboriginal spirituality, the nature of masculinity then and now, and building cars from spare parts in the olden times to go riding around the paddocks of what was then outer Melbourne. His diagnosis was that things for the most part had improved, but that there was still some way to go.

Kingston Heath
The surface was in immaculate condition. Amazing what not being trampled on by a bajillion Hellenic Cup games over the summer can do for a ground.

Around the Grounds
Trundled out to watch Richmond play the Knights on Friday night. It finished 4-1 to the Knights, even though it didn't feel like that sort of game to me - things might have been different had Richmond scored from the spot to make it 2-2 - it was their second failed penalty attempt in as many matches. One Knights fan was sick as a dog on the freeway wing - seemed like one of those cases where he wanted to vomit but nothing would come out. The Knights fans managed to entertain - albeit briefly - with their adaptation of Pink Floyd, chanting 'referee, leave them kids alone' when the referee was trying to defuse a possible melee. A whopping 32 free kicks against the Knights (stat courtesy of Steve from Broady) indicates they will be playing Andrew Marth style this season - which is appropriate since 'Stabba' Marth is coaching them.


Last year during round three it all came to pieces though. I'd like to believe there's something different about this team - and I think in the way they link up, and the way they pressure opposing teams, that there is - but we've been here before and capitulated. I know it's easy, especially for me, to play the arch cynic, but it's pretty obvious we're going to find out a lot more about where we stand this year, and where some of our deficiencies may lie, than we have over the previous two matches.

Final Thought
Two from two and still not quite satisfied. It is the South way.
Posted by Paul at 14.4.13