First things first: this was a pretty damn good game to watch. Secondly, the home team were very stiff not to get at least a point out of this contest. A lot of the credit for that must go to the re-invented and/or re-awakened Peter Gavalas, who since emerging from his year long waking dream (specific moment - against Port during the pre-season), has started restoring the faith of not only his detractors, but also his ardent supporters and most importantly the players in the defensive line ahead of him.

It was end to end to stuff, as South sought to apply the kind of forward pressure that had worked so well against a lacklustre Green Gully and an insipid Southern Stars in the first two rounds. Bentleigh weren't surprised by this tactic, nor were they flustered by it, as they moved the ball well out of defence and set up several promising chances from counter attacks.

For South's part, they stuck to their guns, albeit not in the rampaging manner of the opening two rounds, Without the grunt work of Alan Kearney in the middle - he'll miss another 3-5 weeks with a knee injury - South's build up play was more disjointed, less precise. But credit must also go to Bentleigh for limiting the space available to South's wide players more than other teams had done so far this season. 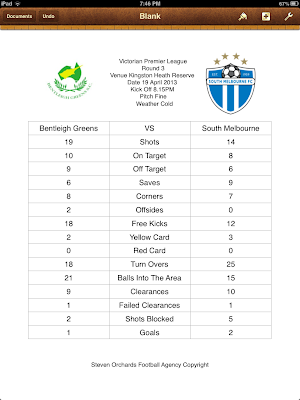 Still, the opening goal of the match came from a cross from the right by Dimi Hatzimouratis, finding Brad Norton at the back post who it must be said for the umpteenth time, whatever his merits as a footballer, does have a knack for finding the back of net. The ball had to bounce a couple of times, but it found its way into the goal, and in this game they all count the same.

Bentleigh predictably wouldn't go down without a fight, and equalised not too long after. Byles was down hurt, and keeping everyone onside, and Bentleigh made the most of that opportunity to level the scores. South players complained to the officials for several minutes, but it didn't do any good - a salient lesson in playing to the whistle. As for the officiating in general, while it was a clean game for the most part, the home team for mine seemed to get the sway of the 50/50 decisions.

The second half was more of the same. A few spectators have given the first half to Bentleigh and the second to South, but speaking only for myself, I didn't think it was thet clear cut. Anyway, the longer the game wore on, the happier I was going to be with a draw. As it turned out, another cross from Hatzimouratis from the right ended up creating the winning goal. Renko Van Eeken, unmarked in front of goal, nodded it past the keeper, and we managed to hold on for the final 10 minutes or so for a plucky win.

During the match, I was concerned about the lack of more defensive players available to us to stifle Bentleigh's game plan. This is where Carl Recchia is certainly being missed. Luke Byles came off hurt, so we're awaiting news on the severity of that injury. But three from three to start the season, and just one more away game before we return to Lakeside for the first time this season.

Steve from Broady's under 21s report
On Friday night South Melbourne's under 21s took on Bentleigh Greens in cold conditions at Kingston Heath. South had good memories at this ground from the week before when they beat Southern Stars here in a very one sided affair. Pre-game controversy arose again when South came out for their warm up and Seb Mattei was nowhere to be seen. 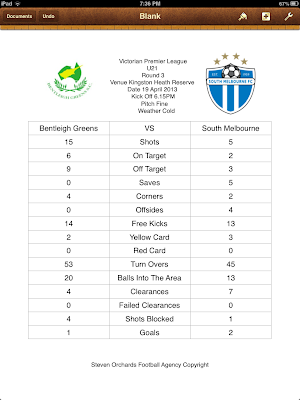 Instead a young kid stepped out of the tunnel in a pink goalkeeper shirt believed to be the under 18s South keeper and I can confirm the lad had gloves. South Melbourne in recent years has always had their second choice goalkeeper playing in the under 21s and then sitting on the bench for the seniors. I don't understand why this is different this year.

Why Mattei just sits on the bench for the seniors and does not keep for the 21s Is beyond me. If he is going to put work in front of playing for South he should find another club. This great football club deserves players who would dive on the chance at playing for the mighty blue and white. I hope this situation is sorted out quickly and does not appear in next week's article.The message is simple: play 21s or go Seb!

But on to the football. The game kicked off and South lost the ball immediately the Greens showed their intent, winning a few corners and not giving up possession for large spells. But as we know in football possession means nothing if you don't put the ball in the back of the net. For all the chances Bentleigh had, they just could not make it count and they paid because in the 25th minute the ref spotted a Greens player all over a South player and awarded a penalty to South. Anthony Giannopoulos stepped up to the spot and converted convincingly.

Bentleigh restarted the game with the match proceeding as it was before the goal, with Bentleigh dominating possession and creating all the chances, but they fell into the same hole again in the 38th minute, when once again a Greens player was pulling a South lad's shirt in the area and the ref spotted it again and awarded South another penalty. Once again Anthony Giannopoulos stepped up to the spot and smashed it straight down the middle to give South a 2-0 lead at half time.

In the second half the Greens were still dominating but the game started slowing down and both teams were running out of puff. In the 79th minute Bentleigh had a crack from outside the box and the swerving screamer of a shot had the South keeper beaten all ends up and gave the Greens that little bit of hope for a draw or maybe even a win. But the South lads stood strong for the last ten minutes of the game and run out 2-1 victors.

Next week the lads face Dandy away which will be another good test for South. Another big thing to come out of the game last night was Anthony Giannopoulos unusual dragging at half time, he could've had a hat-trick in the second half but was dragged. Maybe he was injured or maybe there is more to this than meets the eye - we will see how it all plays out over the week, but until next week GET AROUND IT!!!!!!!!!!!

This week it was Bentleigh Greens' time to shine in the canteen. After a lot of build up about their souvs I can say that this week they did deliver - nice meat and a good serve of meat in the souv, good salad in the souv. They lost some points with making a souv in a bread roll and a very high price ($9) but overall it was nice. I was loving the help yourself to the garlic sauce set up, I got around that shit. The souv kind of reminded me of the old Bob Jane souv days with the bread roll and nice serving of meat. Overall I gave the Greens canteen a 7/10.
Lost and Found
Cripes, a couple of wins and everyone comes out of the woodwork. Saw some faces last night that I hadn't seen for quite some time.

Meet and Greet
It's always awkward meeting people off forums in real life for the first time. People on the internet are not meant to exist outside of that medium.

Public Transport Tales
An uneventful night on the rails. Got there in good time, got home by midnight. No complaints, no weirdos. Some of our under 21s players decided to hoof it to Cheltenham station instead of waiting for the bus. Hope they made it home alive.

Next Week
Closed doors game away at Dandy Thunder. I had been planning to do the stupid thing and actually attempt to watch the game from outside on the freeway, but I've since changed my mind. My time will be better spent at Altona East, who are playing Ballarat Red Devils next week, and pumping a little of money into the fantastic canteen there. Best souvlakia in Victorian soccer, and it's been too long since I had one. Damn fixturing conflicts.

For the rest of you, there's rumours going around that there may be some sort of live stream provided by the club - I'll keep my ears open for any news on that front and report on it if any details come to hand. Or you could just follow the club's official news sources.
Posted by Paul at 20.4.13