Today sees a couple of firsts for this blog. Both of these are due to our regular real life sideman Steve from Broady, who has finally put his money where his mouth is and chipped in with his first written contribution - a match report from the under 21s - and also provided some stats work as well. We hope he continues to contribute on a continuing basis, and that our audience enjoys the extra variety and information. 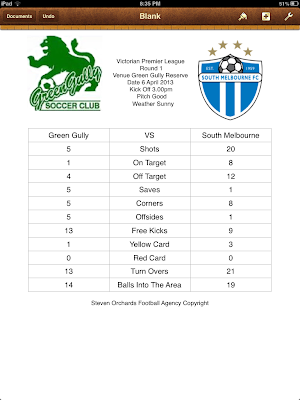 In the end, it was almost anti-climactic. The standard implosion by South sides at Green Gully just didn't arrive. There were a couple of jittery moments, where Peter Gavalas was a little hesitant, but one can perhaps read too much into those incidents.

Indeed, there were several moments today where I thought, 'this is going too well'. Gully looked lackluster throughout most of the game, but we'd stuffed it up so many times before. Renco Van Eeken had his first half penalty saved onto the post, we'd missed a few sitters and half chances - and even though the much maligned Brad Norton had given us a 1-0 lead to take into half time with his flicked header, of course one felt that Gully would surely fire up in the second half.

But they scarcely tested our South boys. There was a period when we were 2-0 up, and we started to sit back a bit deeper, where Gully managed to get forward a bit more, and put in some crosses, win a few corners. But most of these were cleared with relative ease, and eventually we went 3-0 up, and even the most cynical and damaged of South fans had to acknowledge that there was no way back for the home team - and then attention switched to wanting a clean sheet.

There were no bad players. Alan Kearney seemed to get the vote of a few fans as best on ground, and certainly we controlled the middle of the field for most of the match. Dimi Hatzimouratis, playing out of apparent necessity in the unfamiliar position of right back, also played well. The forward set up seemed to click as well - indeed, it was one of those performances where you wondered, how and where are we going to fit in the players that missed out today? There were no Tsiaras, Rixon, Matthews, Fernando, Recchia (who is of course out for the season) - when we start racking up a few suspensions and injuries, it's good to know there are some capable players waiting in the wings.

Soccer's one of those things that people love to over think. Today we saw that it does not necessarily have to be so. Restrict the room the opposition has. Move the ball forward quickly. Put a few more crosses in. It was a continuation of the sort of form we saw during the pre-season, albeit with some nicer finishing. Without wanting to get carried away - it's one win, in round one of a twenty two round season - there were good signs, and if we play like that most weeks, we'll do OK this season.


Steve from Broady's under 21 match report
South Melbourne's under 21s kicked their season off today away at Green Gully Reserve. There was some pre-game controversy with South Melbourne's second choice goalkeeper Sebastian Mattei, who was reportedly expected to start for the under 21s, not rocking up - this caught the coaches off guard and forced them to use a left winger in goals with no gloves which I thought was an absolute disgrace.


﻿ ﻿
The first 15 minuets were very sloppy with both teams turning over the ball 10+ times each. In the 18th minute South Melbourne received a free kick on the edge of the area and Baggio Yousif stepped up and placed it beautifully in the top left corner. South were in control for the rest of the first half and went in at half time 1-0 up. Green Gully come out in the second half immediately with some fire in the belly, picking up some corners early in the second half. Thankfully at the start of the second half the South Melbourne goalie had been given some gloves. In the 69th minute South Melbourne's defence was finally breached with a Gully defender rising above everyone and heading home from a corner. As the clock counted down Green Gully made one last charge in the hope of getting a win. The Gully winger ripped around three defenders and fired home in the last seconds to give Gully a 2-1 win.

South Melbourne fought bravely today and I personally can not wait to see their next game away to Southern Stars. To the bloke who played in goals today for us, well done mate, you did an excellent job considering you are an outfield player.

Crowd Watch
Looks like Gully made a bit of an effort to get a few of their juniors out to watch the game, so the attendance was actually respectable for a Gully game. Someone said the crowd got up to around 1000, but that's probably being very generous.

Canteen Capers
An apple and a couple of bowls of corn flakes doesn't last too long, and I was momentarily tempted into perhaps buying something from the worst canteen in the league - but after taking the food poisoning experiences of others into account (and remembering my own horrible non-soccer related food poisoning experience of a few years ago), I decided to hold off. A victory for self-discipline or self-preservation?

Next Week
Southern Stars away on Saturday, at Kingston Heath. A dogged defensive effort was apparently the Stars' main weapon in their 0-0 draw with reigning champions Dandenong Thunder tonight, so expect more of the same next week. Dimi Tsiaras' will be available again after serving the remainder of his suspension. There'll be no Tom Matthews for about five more weeks, after he reportedly fell off a ladder at work and broke his arm.

Final Thought
I enjoyed that. Here's hoping it's not another false dawn like last year.