And now we cross to our man in Dandenong for match reports on both the senior and under 21 matches against Thunder. 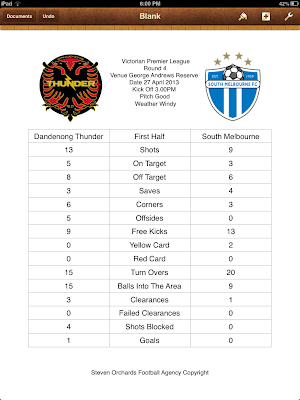 South Melbourne played at a soulless George Andrews Reserve this week due to the five home game lockout punishment handed down to Dandenong Thunder by the FFA and FFV. There was an extremely strong wind during the game, with goal kicks blowing back to the goal keeper, making conditions very uncomfortable for the players.

South Melbourne kicked with the wind in the first half and had a few opportunities to score but failed to hit the target. Instead it was Dandenong Thunder kicking against the wind who opened the scoring in the 25th minute when Foster played a ball across the goal and Shaun Kelly turned it into his own net. As the half came to an end with Dandy leading 1-0, South had wasted their chance kicking with the wind and it looked a very hard road to come back from for South.

South tried to get into the game at the start of the second half, but struggled to break down a Dandy defence which looked happy to sit on their one goal lead. In the 77th minute South got caught on the counter and went 2-0 behind. Kelly was lucky to stay on the pitch at the end when he went through a Dandy player late while already on a yellow card but the ref resisted pulling out the red. In the last minute Foster put south out of their misery scoring a nice solo counter goal to give Dandenong Thunder a solid 3-0 win and capped off a bad day for South in the hard to play in conditions.

Steve from Broady's under 21s Match Report
On Saturday afternoon South Melbourne under 21s took on Dandenong Thunder at George Andrews Reserve. South were coming of two good away wins and were top of the table after three rounds. South had a massive boost with Trent Rixon and Tom Matthews both in the starting eleven. Rixon was having his first real chance at some game time for 2013 after he had surgery on his injured hip at the end of last season and Mathews was coming back from a broken arm.

Dandenong kicked off the stronger of the two teams in the early stages of the match, but in the sixth minute South was awarded a free kick on the edge of the area. The ball was swung into the mixer and headed home by The Rixer who towered above the Dandy defence to give South an early 1-0 lead. After South took the lead they created s6me more chances to go 2-0 up, with Anthony Giannopoulos making some good runs off Rixon.

But that didn't last too long, and after a while Dandenong started to dominate again and were rewarded in the 14th minute when their captain stood up and made the most of a goal line scramble to level the scores and 22 minutes later the Dandy captain had another chance to score from a goal mouth scramble and didn't disappoint, converting his second goal of the afternoon. 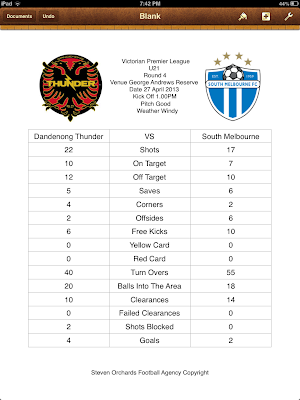 The lads went into the sheds at half time with Dandenong Thunder leading 2-1. At the start of the second half South lost the ball immediately and paid for it with Dandenong running the ball down their end of the pitch and converting after 48 minutes - after that goal went in to put Dandy 3-1 ahead the game started to die down. South got themselves back in the game in the 79th minute when Sebit Muon broke clear of the Dandy defence and buried the ball into the back of the net to make the score 3-2. This continued Muon's good start to the season, finding himself on the score sheet regularly.

Just as South thought they had a chance at a draw and maybe even a win Dandy ran the ball down their end and scored an excellent solo effort goal sealing South's fate. The game finished 4-2 to Dandenong, but there were some positives to take out of the game with Tom Mathews playing a full match on his comeback from injury and Trent Rixon getting on the score sheet for the first time in 2013. South Melbourne's under 21s next league game is against Richmond at Lakeside Stadium in two weeks, until then GET AROUND IT!!!

Steve from Broady's Canteen Review
Since Saturday's game was behind closed doors, I was unable to try any food from the Dandenong canteen and I only see it fit that they get disqualified from the VPL canteen championship. Better luck next year lads.

Around the Grounds
With a Friday night match last round, and no access to the venue this week - and no desire to watch our match at $29 for a stock standard chicken parma Beachcomber - there was plenty of around the grounds action to take in.

First up was a trip to John Cain Memorial Park/Reserve to watch the two other sides with perfect records up until that moment. The Melbourne Knights opened the scoring in the first minute, but that was as good as their afternoon got. Northcote equalised a minute later, and had a 3-1 lead at half time, with the third goal being scored right at the end of the half. The Knights missed a sitter at 3-1 down, before Northcote added a couple more to make a sure thing of it.

Rubbing salt into the wound, the Knights also had a penalty saved at 5-1 down. They were pretty poor, with no midfield presence worth mentioning. Northcote were OK without being anything flash. They could have scored a few more, but who wouldn't take a 5-1 win before kick off?

On Friday I went and saw Richmond at home to Northcote. Richmond were a rabble, structures all over the shop and a rampaging Northcote hungry for goals found them in spades. 7-2 it finished to Hercules, who though may have played some weaker opposition this season, have at least been able to put most of them to the sword, ans sixteen goals in four matches in not something to sneeze at.

Even more disappointingly for Richmond, what was the best canteen in the league has gone down the toilet. No more cakes; they seem to have changed their kransky supplier to a significantly inferior product; and they're offering pizza and gyros now. The pizza was reportedly cold, the souvlaki 'so-so'. Richmond were great for quality and value, and they did it by focusing on doing a few things and doing them very well. Now they're doing a billion things and doing them pretty much all poorly.

Lastly, headed out to Paisley Park to watch Altona East and Ballarat Red Devils, two struggling State League 2 North-West teams. East managed to score one early, and score one late, enough for their first win of the season. It was a pretty dire game in between those goals though, and there's only so much you can blame

Next Week
Next week South are at Lakeside for the first time this season, with a Dockerty Cup match against Oakleigh. The match is provisionally scheduled for Saturday, though the time has not been confirmed as of yet.
Posted by Paul at 28.4.13