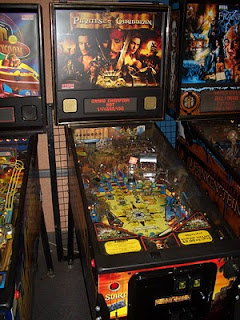 So the Public Transport Faction elected to alter its usual habit of watching the reserves (who won 2-1 by the way) and headed instead to 'pre-drinks' at the St Albans Hotel, a venue I've walked past a number of times on my way to uni without ever stepping inside its doors. We went out the back to the sports bar area which all in all is actually not too bad a place. And it had a pinball machine! OK, so it was only Pirates of the Caribbean, a terrible table, but pinball is still alive! The last time I played pinball in St Albans was at uni when they still had that soccer one with the moving goalie. That was some years ago. Man, that was a good table.

First ever visit to Churchill Reserve, which is something like a cross between Sunshine George Cross' Chaplin Reserve (the stepped terraces) and Western Suburbs' Ralph Reserve (the compact field), but about ten times better than either of them, thanks in no small part to the very nice social club. Unfortunately the line for food and drink was too long for my tastes, and I can't write anything good or bad about the local fare.

Anyway, amongst all these things, a VPL match did break out at about just after 3pm, and despite St Albans being in an absolute mess at the moment - no coach, ow wins, no morale - our task was made harder by the absence of Jesse Krncevic, doing some kind of law exam, and Steven O'Dor and Steven Topalovic carrying injuries. In addition, Marinos Gasparis started on the bench. What all this meant was Kyle Joryeff up front, Bobby Russell getting a start, and Carl Recchia playing in defense in what looked like a sweeper's role. Recchia's absence from the middle saw Seb Petrovich get another chance in central midfield.

We started off well enough, and a save from a Joryeff shot lead to an early corner. Taseski whipped the ball in, the St Albans defence failed to clear it, and Fernando latched onto the loose ball for the opening goal, his 50th league goal for South. We seemed to be, if not in control of the match at that point, then at least doing more than enough to keep out of trouble and create the occasional forward thrust. But the big tackles on the small ground started coming in, and all of a sudden Russell was off with Gasparis replacing him. St Albans created perhaps the only other good chance of the half, with a goal mouth scramble from what appeared to be a clear offside - the linesman did put his flag up - all of which lead to Carl Recchia saving the ball with his face. When the linesman made his next offside call - this time acknowledged by the referee - he got a big cheer from the visiting fans, and he flashed a little smile.

The second half wasn't so flash from us. We were pinned into our half for long stretches, and we struggled to get and maintain possession. But it wasn't all bad, as we defended well for the most part, blocking the long range shots and intercepting the loose balls in the box. It helped that St Albans moved the ball slowly and predictably, but it was nice for once to go to a small ground and actually put out an appropriate response to the conditions. About fifteen minutes from time, Ljubo Milicevic sidled past three opponents, slipped a through ball to Joryeff who made it 2-0, and more or less iced the game.

Seb Petrovich became another victim of the home side's physical approach, and he came off with the assistance of the medicos with ice on his ankle. Nicky Jacobs got a late run replacing Kamal Ibrahim, and eventually time ran out for Dinamo, who remain winless. South jump to the top of the table for the first time in about four years. Apart from Recchia, who played an excellent game outside his usual position, no one stood out for us. But a cleansheet and a backs to the wall performance was more than enough for me. Next week back at Northcote, at 3pm, against an improving Richmond who have won a couple of games on the trot and have momentarily at least picked themselves up off the canvas.

Gains was celebrating his 27th birthday today, keeping it very quiet until we got to dinner at the Hot Space Sichuan Bar on Russell Street, where he decided it was his treat. The Kung Pao chicken was excellent, though one suspects the mirrored wall they have there is for gweilo like me and Steve from Broady to see for ourselves how red we became. In fact this was he first time I'd even seen Steve struggle to finish a meal, not because it wasn't good, but because the heat of Sichuan cuisine got through to him. All in all, a good day out. Tomorrow, international ice hockey action.
Posted by Paul at 3.4.11