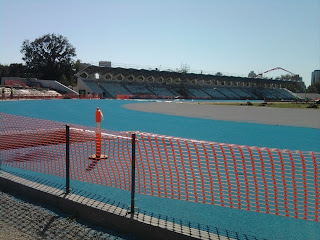 Hello people, today we have another little update on the stadium's transformation. These two photos are the pick of the bunch taken on a camera phone by a Melbourne Victory supporter who goes under the alias of 'a mac', whom we thank for sharing these images.

In the first photo you can see the new stand, which is looking a lot like a new stand nearing completion should. You can also see the brilliant blue of what will be the running track. Yes, one of our requests has seemingly come true. The angle, while perhaps being deceiving, seems to suggest that the view from the new stand may not be so bad - though the view from behind will, as expected be atrocious. 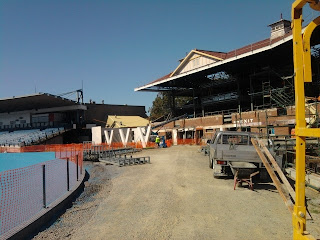 The second photo has the merest hint of our stand, with its new seating, but as you can see, the more prominent object is the 1926 stand undergoing its refurbishment. There's still a long way to go on that front. But the faintest rumours have begun circulating that we may be back for the last three games of the season. I'm finding that a little hard to believe, but we'll see I guess.
Posted by Paul at 7.3.11