The Case of the Mysterious Jersey

Do you know the story behind the jersey in this post? 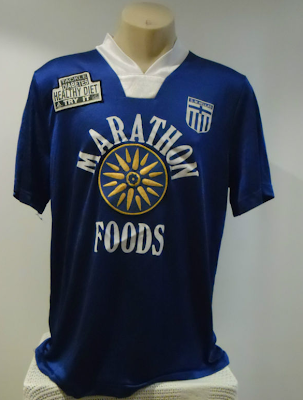 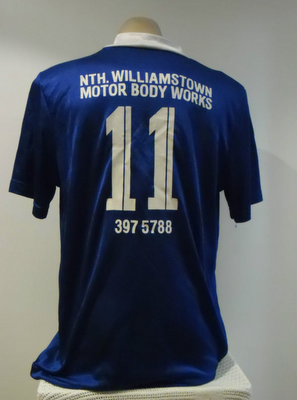 Recently listed on Ebay, it has caused quite a stir among some South fans, mostly because no one can seem to remember when and why it was used.

And yet people claim that it seems familiar somehow. I don't have anything other half-educated guesses as to its origin.

The seven digit phone number on the back of the shirt gives it away as a pre-1998/99 artifact, but that doesn't get us very far.

My guess is that it's from the early 1990s, (perhaps circa 1992-1995 at the latest) for two reasons. One, because the use of the Vergina Sun image probably dates it to around the high point of passions about the Macedonian name issue. Secondly, 'healthy diet, try it' was a Victorian government health slogan/initiative from around that time also.

Yet one of our readers, via email correspondence, has suggested that perhaps it is a late 1980s artifact, because of the different type used for 'Marathon Foods' to that which was commonly seen. The vendor of the item was also interested but unable to provide any further detail as to the provenance of the jersey.

The lack of an NSL badge or apparel maker's mark suggests to me that it was at best a one off jersey. The sponsor on the back seems so minor, that it may have been a youth jersey, Dockerty Cup jersey, charity match jersey, or, and this is a longshot, a jersey from South Melbourne-Mordialloc, our state league offshoot.

The sponsor on the back, North Williamstown Body Works, seems to be still around, and operated by a Greek bloke as recently as 2010. Who's up for giving them a ring for us? We'd do it, but we suffer from a terrible phobia of calling people up.
Posted by Paul at 28.11.12