Here's a very interesting article which popped up in the Greek Herald/Ellinikos Kirikas, Sydney's Greek paper. 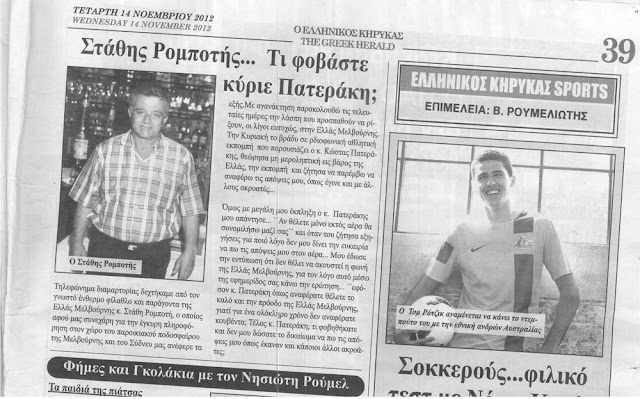 For those who can't read or understand Greek, the basic story is this,

Basically this South supporter, Stathi Rombotis is saying, that after seeing all the mud thrown at South by 'the few, thankfully', he tried calling 3XY during their radio show, to be given air time like other people had been given. He claims he was told by one of the hosts, Kostas Paterakis, that he would only be dealt with off air.

When Rombotis asked why, he claims Patarakis gave him the impression that he didn't want to hear the voice of South Melbourne on the air. So Rombotis finishes off by now asking, why hadn't they (3XY Radio Hellas) talked about South for a whole year? Why are they so scared of letting Rombotis have his opinion heard on air like other callers?

Good questions, Stathi. I wonder what the answers will be.
Posted by Paul at 16.11.12