Some people may not be aware that when the club went into administration back in 2004, one of the ways we avoided going under was due to a loan by Messrs Christopher and Toumbourou.

The nature of that loan has been subject to some conjecture over the years. While we're not going to speculate on the exact details - because at this blog, we don't know what they are - the general perception (rightly or wrongly) among those who know of this loan have seen it as a non-interest loan, to be payed back when the club got back on its feet.

Seeing as the club has seldom if ever made a profit in its 53 year existence, even in the good old days, the debt has hung over the club like a sword of Damocles. This loan debt has been mentioned at every AGM I've been to since 2006. I'm not able to recall the exact figure of the debt, but an amount of $120,000 gets thrown around a bit.

Despite being donated by two individuals, the debt was consolidated under the company name Wellington Investments. It now appears that one of the parties who made the loan, the son of Mr Toumbourou, has asked for the debt to be repaid.

It is my understanding that there are disagreements about the nature of the loan between the club and Mr Toumbourou's son, and that thus far, mediation has failed to resolve the issue. Mediation attempts are apparently still being made, but failing that, the two parties may be heading to court in December.

All of this has not been helped by the following article published in Ta Nea last Wednesday: 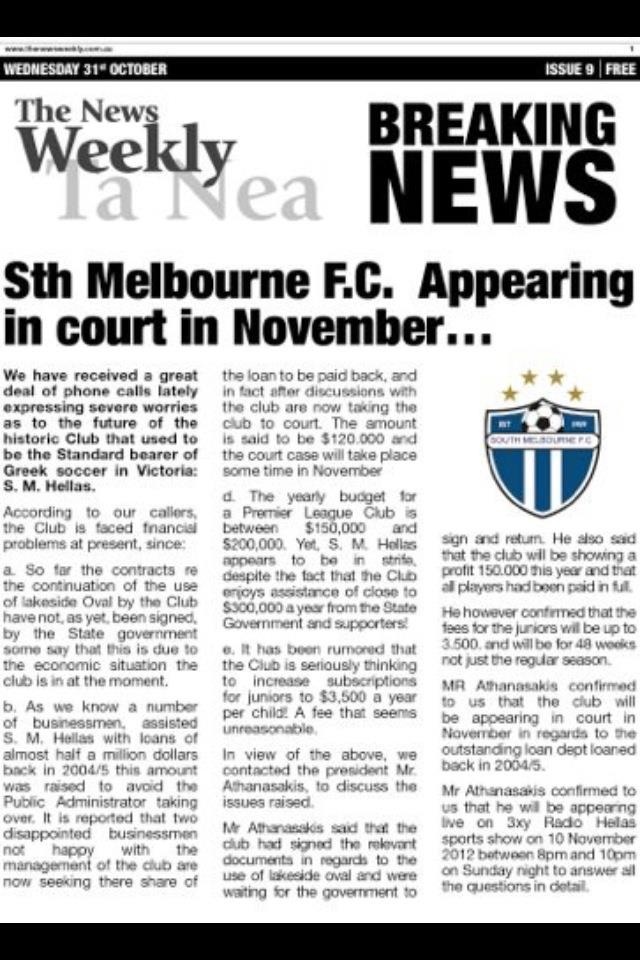 Now I have no qualms with any media outlet reporting on this issue, but this is such a terrible article on so many levels.
There are also bound to be insinuations made from our supporters about the fact that this was published in a Greek Media Group publication, which also owns and operates Greek community radio station 3XY Radio Hellas. Owned by Melbourne Victory shareholder Harry Stamoulis, people will see this as another part of the conspiracy against South Melbourne.

It does not matter whether it is a personal or institutional crusade against the club, but when added to previous behaviour from that organisation - reputedly being blackballed from 3XY Radio Hellas' sports program, the lack of coverage of Melbourne Heart in Ta Nea, Stamoulis affiliations with disgruntled former supporters/sponsors etc - it does not paint a pretty picture.

The club responded to the article with this media release, the entirety of which follows:

South Melbourne FC wishes to inform its members, supporters and sponsors that the article titled, “Sth Melbourne F.C. Appearing in court in November”, which appeared in The News Weekly section of the Ta Nea newspaper contains numerous inaccurate statements.

Preparations to enter into the agreements for the Club’s long-term use and occupation of Lakeside Stadium following the Memorandum of Understanding the Club entered into with the State Government are progressing as scheduled.

The Club is in a sound financial position and will publish its financial accounts prior to the end of the year in accordance with its long-standing practice.

Whilst the Club has been sued by Wellington Investments, the company previously operated by club benefactors Messrs Tony Toumbourou and Chris Christopher and run by Mr Toumbourou’s sons, the Club does not wish to comment on the detail of the case. It wishes to note only that the claim relates to a time when the club was placed into administration following the disbandment of the National Soccer League. The Club is protecting its rights and those of its members in the course of the litigation. On a more serious note, the Club is unfortunately forced to investigate its legal options in respect of this error – riddled and misleading article in order to protect its well - earned good reputation within the community.

More positively, mention is also made in the article of the Club’s junior program of which the Club is very proud. All places in its Youth Development Program have been filled for next season and the Club looks forward to the development of its future stars.

For all media enquiries, please contact Nick Galatas on admin@smfc.com.au


It's a confident response, and from what I can gather, the club seems more confident of winning this battle (should it go to court) than our previous court date with the FFV from 2010 (which of course predictably won the battle, though not the war). Me, I'm never confident when it comes to court cases, especially with the sort of hubris our club is prone to suffering from.

It'll also be interesting to see how Ta Nea's rival Neos Kosmos deals with the story. There may have been something in their English language supplement last Saturday, but it's not online yet, so we can't gauge their angle. Whatever happens though, we at South of the Border will try and keep up to date with this issue, possible court dates and speculative potentially libelous innuendo included.

UPDATE - NEOS KOSMOS JOINS THE FRAY
It appears that Neos Kosmos have decided to get in on the act. Here is their article on the matter.

A prominent Melbourne businessman is taking South Melbourne FC to court over a loan secured in 2004. It is alleged the terms of the loan included time limits and a debenture charge over the assets of the club, and they have since been breached.

The money, he claims, is in excess of two-hundred thousand dollars. Although negotiations for repayment had started several years ago, they have since soured and there is current legal action afoot. The club has been a flag bearer for Hellenism in Melbourne and Australia in general and now finds itself on the brink of receivership, should the court action prove successful.

Further, it is understood that the club entered into a Memorandum of Understanding with the State Government of Victoria in 2009 where the club received payments in excess of $25,000 per month. This MOU facilitated the creation of a lease, ensuring the long term tenure at Lakeside Oval. To this date, it is understood, that this lease has not been executed by all sides.

All of which the club categorically denies. Leo Athanasakis, the club's president, assures that the club is in no economic strife. "The Club is in a sound financial position and will publish its financial accounts prior to the end of the year in accordance with its long standing practice," he said.

"The club has no debt other than this liability now to him. The club owes nothing to players, owes nothing to other creditors." In fact, he says, the club will be "declaring a profit of close to $150,000". The president explains the delay is normal, with most sporting clubs waiting six months for the government's approval.

"The Lease has now been signed six months ago and it's currently within parliament as the process dictates with other leases that involve crown land. It happens with bowling clubs, tennis clubs or any other club that signs a lease with the government, they go through the same process and they all take about six months before they come back.

"So it has been signed by South Melbourne and the government and they go through parliamentary process, red tape in other words," he says.

The club will also be seeking legal advice over what he calls "riddled and misleading" article published in Ta Nea. The article only uses unnamed callers to back up its claims the club is in financial turmoil and blames the club of unfairly raising the cost of subscription for juniors to $3,500. The subscription, the president says, is not for juniors, but is a highly intensive training regiment for 14-21 year-olds.

The program has already sold out, offers 5 days training a week and has full time staff outside of the normal teams.


Like the Ta Nea article, there is no byline. Also like the Ta Nea article, it does not name the businessmen involved who are seeking to take South Melbourne to court. It is also concerning or intriguing depending on your point of view, to see such wildly different numbers being talked about in terms of the loan. Ta Nea says $120,000; Neos Kosmos says in excess of $200,000.

At least the article goes to the trouble of further investigating some of the claims made in the Ta Nea article. It elaborates on the juniors situation, and goes into some detail about the Memorandum of Understanding with the government on our lease arrangement.

Lastly, for now, I'm interested to see the claim made by Athanasakis that this is the last remaining debt that the club has on its books. If true, that'd be a pretty good turnaround in such a relatively short space of time.
Posted by Paul at 5.11.12