I’m back. Two regular season games to go, and the finals begin. Who will secure their top five position and who won’t? Will South miss out on a finals series two seasons in a row? Will Oakleigh miss out, or will they make it and choke? This week's Kiss of Death has all the answers.

Scotch Watch
Two games to go, and the contest is still very much wide open. South has Dandenong Thunder and Northcote to play; Bentleigh has Northcote and Green Gully, so obviously no easy games for either combatant. South was in second place but wins to sides with games in hand has seen us slip down to fourth.

Hume City vs Oakleigh Cannons
1st v 2nd. Hume lost in an upset at South Melbourne two weeks ago, while Oakleigh continues to play unimpressive football and continues to chug along in second spot. My crystal balls tell me that Hume will beat Oakleigh and give them the heeby jeebies. Hume City 2 – Oakleigh Cannons 0.

Northcote City vs Bentleigh Greens
6th v 5th. Here’s hoping that Northcote beat Bentleigh for the sake of Scotch Watch. We all know by now that if Bentleigh scores, you can’t break them down. Johnny A has them playing a normal game up until they score or take the lead, then it’s park the bus time. Seriously annoying, yet effective. Northcote City 2 – Bentleigh Greens 1.

Richmond v Melbourne Knights
9th v 10th. Only Richmond is of finals contention in this fixture. They still can make the finals from 9th spot barring a miraculous goal scoring spree. After the midweek Mirabella Cup victory over Cobram, the Knights will be going to Kevin Bartlett Reserve with tired legs. Richmond 2 – Melbourne Knights 0.

Heidelberg vs St.Albans
7th v 11th. Another somewhat dead rubber. St. Albans have joined Springvale in State League 1 next season, while the Bergers will be in the top five of the VPL. The only team with a game in hand, and that’s against the shit idea that is the VTC. Heidelberg 3 – St. Albans 0.

Dandenong Thunder vs South Melbourne
8th v 4th. Not sure if I'm going to be at this one, as I have other commitments on the day. Even with a loss Dandy and South can still make the finals, dependent on results and next week's final round. Interesting times at South lately with Joe Montemurro being released from the coaching panel. A lot of changes at South throughout the season, but the team seem to be travelling OK. Not good, but OK. It just goes to show how poor the VPL has become when only one team has stood out this season and that is Hume City. South Melbourne have never lost at Dandenong, and they don’t need to start doing that now. Eddie has a pretty much full squad to choose from with Matthews, O’Dor, and Junior all back. Do you change a winning lineup?Dandenong Thunder 0 – South Melbourne 2. 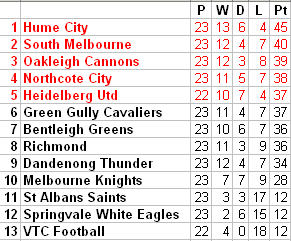 The table after this weekend will look like this leading into the final round.
Posted by Paul at 28.7.11