Graeme Hocking and the story of his local club - now updated! 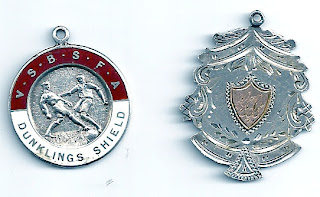 Recently one Graeme Hocking wrote to club historian John Kyrou, to talk about his time as a schoolboy footballer for South Melbourne United, and John was kind enough to pass along the letter and photos of Hocking's team medal and personal medal - which Hocking has donated to the club - to South of the Border. 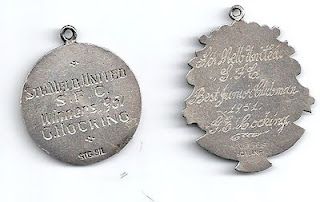 Graeme was a member of United's 1951 Dunklings Shield winning team, which was a schoolboy competition which had run since at least 1934, but rather was confusingly also the name given to trophies for several other sports. including rowing and life saving.

In previous discussions (here and here) on South Melbourne United, we noted that members of United's junior wing left in the mid 1940s to form the Park Rangers club. United's continuing success in junior soccer indicates that there was a healthy soccer playing community within the South Melbourne/Albert Park/Middle Park area.

Hocking was the captain of the side, and his dedication to his teammates and the game can be seen by the fact that even when his family moved from the Middle Park area, first to Upper Ferntree Gully, then Castlemaine, he would still make the trip down by steam train to Melbourne to play for his team, arriving home at 7:30pm after having gotten up at 4:00am to perform his duties as an apprentice baker.

Update! With thanks to Ted Smith and Graeme Hocking for the additional info.