Indirectly toward Hellas - A new piece by Savvas Tzionis

This is another slightly rambling piece by frequent blog commentator Savvas Tzionis about the circuitous paths some people had in becoming South Melbourne Hellas fans. While many of our supporters had the fortune of being born into the club so to speak, others have endured more convoluted paths to become one of us. So here is Savvas' journey, with several digressions along the way.

My initial piece from a couple of years ago detailed my journey as a South supporter. What follows is akin to a movie prequel (like Dawn of the Planet of the Apes). It tells of my journey as a child through the sporting landscape, where misconceptions often ruled (like thinking that 'black humour' was comedy performed by Black Americans!), towards my final destination as a South Melbourne Hellas supporter.

Starting with my earliest memory of soccer. It's 1974 and I am visiting a takeaway food outlet in Dandenong with my father and his younger cousins, as they decide whether or not to purchase this particular business. As I sit there bored, as all children must endure, I am staring at a poster on the wall of Manchester City vs West Ham. In a world of black and white television and print media, the claret and light blue colours were quite beguiling. I decided that Man City (they were the prominent team in the poster) is my English team. I also decided in that same year, when My Sporting Life was truly born, that I would support whoever was on top of the ladder in the VFA (Dandenong) and the State League (Prahran Slavia). My primary support, however, was for Carlton in the VFL and was instilled prior to 1974 through my father's influence.

My support for Dandenong lasted until both they and the VFA itself withered away after the 1970s. Man City managed to hold on to my affections until Charlie George slid across the turf after scoring for Derby County in 1975 (he sub-consciously looked Greek to me!). But by the end of the 1975/76 season, somehow I was lamenting the loss in the FA Cup final that my Man United suffered at the hands of Southampton. It then took me another five or so years to realise that the FA Cup was NOT the equivalent of a VFL premiership (misconceptions of youth!). And then started the hateful frustration seeing Liverpool dominate (I was always more a socialist than a Man U supporter) until the early 1990s.

My support for Prahran Slavia was just as short lived as Man City. On a particular Sunday I decided it was time to watch live State League soccer on commercial television (chortle, chortle!). The two teams were Melbourne and South Melbourne. I decided that...  Melbourne (!) was my team. (years later after they had in fact disbanded, I discovered they were known as Melbourne Hungaria, but I suspect commercial TV never stated this). Melbourne lost the match, and by the time my uncle decided to take me to Esther Park to watch his team Heidelberg play Mooroolbark in 1975 (my twitter discussion confirmed the year), I recall I was a South Melbourne Hellas supporter (I don't think I even knew what Hellas stood for. I knew about Ελλάδα and Greece! But I didn't equate Hellas and Ελλάδα! Although I knew that South Melbourne Hellas was a Greek team and that naturally, that is my team). Confused? Importantly, my uncle left Australia to return to Greece in 1976 so no more local soccer for me.

Whilst all this was happening I was reading a book that was given to me about soccer and learning a little about the rules, and some 'strange' facts that were revealed at the end, such as the fact that England didn't win every World Cup, and that some strangely named country called Uruguay had won two (more misconceptions of youth! What a New Dawner I was!).

At Middlefield Primary School (an ethnic microcosm of Australian society at that time) in the suburb of Blackburn North, Australian Rules was my first love, but somehow by Grade 5 (1976) and Grade 6 (1977) I was playing in our soccer team, rather than the Football team. We were coached by our disinterested Grade 6 Scottish teacher, Mrs Cannon, until the older brother-in-law of one of the players asked and was given permission to coach us. All of a sudden, from a motley bunch of kids who had no idea and who were getting beaten 6-0 by our local rivals (Blackburn North Primary school, our own personal Shelbyville!) we were winning 9-0 against other schools, and progressed to the semi-finals against, poetically, Blackburn North. Inspired by our coach (Johnny Laczko, who we were aware, was Hungarian) and led by our captain, Wayne McKenzie (our local version of Johnny Warren?), we made it all the way to a penalty shoot-out after holding them to a 0-0 score line. The dream ending was not to be as we only scored one goal! We were more disappointed for our coach, who was visibly upset, than for ourselves. I think part of that was that here was an 'adult' who treated us as equals, and not, as the saying goes, children that needed to be 'seen and not heard! 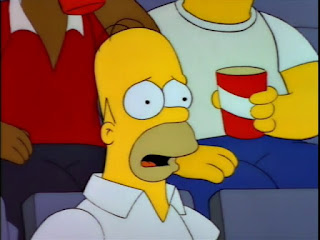 During that year of 1977, I also remember getting excited about the advent of Channel Ten showing German soccer (I had some idea that they were playing the best football at that time, through both their club and national teams). I stayed up and started watching the 10pm telecast between Mönchengladbach (Munching gladbag?!!) and some other team. But like Homer Simpson, when he was trying to watch baseball without alcohol, I was quickly bored by the interminable back passing and slow play. I switched off, and so did everyone else it appears. These weekly telecasts didn't last the year! The idiots at Ten didn't bother with editing the match (they made a similar mistake 10 years later with Wrestlemania II)! So it was back to focusing on the 'best soccer in the world', the English game where games on The Big Match only took 40 minutes and were always 'exciting'. And how could any of us not like the kindly host, Brian Moore (who reminded me of a nice version of Arthur from On the Buses). This was a supposedly tumultuous period ion Australian Soccer with the advent of the NSL, but I was oblivious to it. All my Fathers side of the family were migrants from the early 1950's and VFL devotees. I wonder if they looked down on soccer and its adherents amongst the recently arrived migrants from Greece? The attitude of my father wouldn't have been helped by my uncle getting into a fist fight at one particular game in 1976 at Middle Park, with another Greek over the fact that some of us kids were sitting on top of the outer wire mesh race, blocking the view of some spectators! I think we left the game before it even started! LOL Yep, once my uncle left these shores, there was no soccer outlet for me at this stage.

So by 1980, in my high school teen years, soccer had taken a back seat. Had the advent of the NSL actually lessened the appeal of the game to the local soccer following population? Or had my uncle's return to Greece removed an avenue to attending games? My father was interested in neither soccer nor, (don't scoff!) professional wrestling (I suspect it attracted a similar clientèle!). Of course my VFL team, Carlton, was in the middle of its most dominant era, which helped steal my focus. Yet at high school we would still play games of schoolyard soccer. However, when a student shouted 'Kosmina!' when scoring a goal, I assumed he was talking about some elegant Continental European player!

I really was detached from the local game, except for the one moment in 1981 when I attended two games in one day with my auntie's new husband (Footscray JUST vs South at Schintler Reserve, and Preston Makedonia (my first introduction to this group of people!) vs Heidelberg at a pulsating Olympic Park at night . But that was it until 1983 when, finally, I was becoming more interested in the NSL via SBS. I recall Preston were leading the table but that South, after having sacked Rale Rasic and signing Len McKendry, were charging up the ladder. With the pressure of HSC, I was always looking at a distraction, and having a bit more freedom at age 17, I attended, via public transport, two pivotal matches (South won both) against the all powerful Sydney City Hakoah and Marconi with my non Greek friends Tony Henshaw and Mick Collier (the same Mick Collier who attended the amazing Bulleen v Heidelberg game last season with me).

Together with the 1982 World Cup, which our Italian-born Economics teacher would force us to discuss, there were these brief moments when soccer would take a hold of my consciousness. But there always appeared to be a roadblock to taking it a step further. My father's lack of interest, my uncle's absence after 1976, the 'bad guys' (Italy and West Germany) playing off for  the 1982 World Cup at the expense of the 'good guys' (Brazil and France), the dominance of my VFL team, Carlton, school years, living in the 'burbs rather than inner suburbs. These road blocks would remove themselves as negating factors, coinciding with the freedom of being an adult and getting a licence in 1985. And a connection to South Melbourne and local soccer in general was finally able to flower.

Postscript
Interestingly, when my family visited Greece in 1980, I was shocked to hear my uncle tell me that he didn't attend the local soccer in Patra. His reasons were vague but I had just assumed that, because soccer was so popular amongst Greeks in Melbourne, that in Greece itself it must be infinitely more popular. But years later I deduced why he didn't attend. Greece was not a first world country with money to spare on attending soccer matches. The local team was Παναχαϊκή. They played in a dilapidated stadium, and they were a struggling team. Add to this the fact that most Achaeans supported a major Athenian team, and you get a sense of how the A-League was able to draw supporters away from the older clubs. But here is the interesting postscript. My uncle did eventually become a regular attendee at Παναχαϊκή games about seven years ago. There is hope for our own South Melbourne!
Posted by Paul at 30.1.17