Well, we matched it with them for about 20 minutes, and then we didn't, and we copped two goals and we looked done like a dinner, And then we somehow dug our way of that, not without a bit of luck, and almost snatched it.

Nick Epifano is a hell of a frustrating player. In the first half he was nowhere near it really, and was directly involved in the first goal we conceded, after he dithered in midfield and lost the ball, from which Bentleigh countered and scored while we had numbers committed forward. What was worse was that the danger from such half-heartedness was already apparent, after Milos Lujic had earlier stopped dead waiting for a referee's whistle that never came, sending Bentleigh on their way.

To be fair to Epifano he was not playing in his more suited wide positions, and neither did I think he that had the capacity to pull himself out of his lacklustre performance - and to be even fairer, he was hardly alone in the slack arse stakes in the first half. The whole side picked up their work rate, and the performance improved considerably, and Epifano was a huge part of that, so credit where it's due.

Less credit to David Stirton who hasn't quite lived up to my expectations yet. I've been defending him over the past few weeks despite his sluggish form from the attacks of my favourite hill and terrace loud mouth, but last night Stirton had a shocker. Subbed at half time - as part of an atypical Chris Taylor early double sub roll of the dice - his replacement Andy Brennan if nothing else provided the kind of grunt work that Stirton would not. Whether Stirton gets a reprieve for next week is anyone's guess.

Lujic is beginning to annoy a section of the supporters - this writer included - with his tendency to now play for fouls and not play to the whistle. The aforementioned incident was a perfect example, and even the penalty that we got was in that realm. Looking at the replay, he does get clipped, but the possibility that he was milking it has now entered my mindset and it's going to be hard for me to shrug off. Of course for others this is less of an issue, and they may even applaud Lujic for winning the foul, because there was contact and he made the most of it to the benefit of the team. And what of last year's game, where we were denied a much more obvious penalty? Swings and roundabouts.

Epifano's equaliser - which was well worked, though I think Alistair Bray could have done better if he'd just stood his ground - set up a show stopper of finale, where the Greens were denied a goal late on for reasons I'm not aware of, Tyson Holmes didn't score against us, and Lujic seemed to pull up with cramp just as the ball sat up for him to snatch the winner in the last seconds of the game. Both teams can play better, but I think we have more improvement left in us than Bentleigh, and more than the point we got out of the game, that's what makes me happiest - despite being very unhappy with our performance for large chunks of the game.

Next week
Heidelberg away.

Could we have had Eagar earlier?
Overhead a story yesterday that prior to joining us last year, Michael Eagar had previously trialled with us in 2013, only to be rejected.

Wavelength: 495–570 nm
My, wasn't the Kingston Heath surface looking particularly verdant last night? Maybe because someone - either the local council or the home team themselves - had it painted green! It seems as if South's team manager Frank Piccione has had a horror time trying to get the green paint off the white uniforms. Brad Norton has claimed that even after three showers, he still looks like the Grinch! More seriously, why was there paint on the field? What was the paint on the field? And who's going to reimburse us in the event that the paint has left permanent stains on the uniforms? Speaking of things green and not being what they claim to be...

Truly, the most overrated of foodstuffs in the league
Ten dollars doesn't get you very far in the south-east. Oh, in parts of the west it can get you both a meat filled roll and a soft drink, but out there in the middle of nowhere, you're left with no change from a tenner after you purchase your meat and bread product. But that's OK, as it's part of the experience of travelling to overhyped football tourist spots like FoxSports Souvlaki Stadium. What's less than acceptable is being charged ten bucks for what is essentially a bread pocket half filled with lettuce so devoid of flavour that it felt not like I was eating discarded grass clippings, but instead munching on leftover parts of the synthetic turf they used for the second pitch. Speaking of which...

Segment rescinded due to ongoing investigation
Because sometimes you gotta sure make of a few details before going off half-cocked. 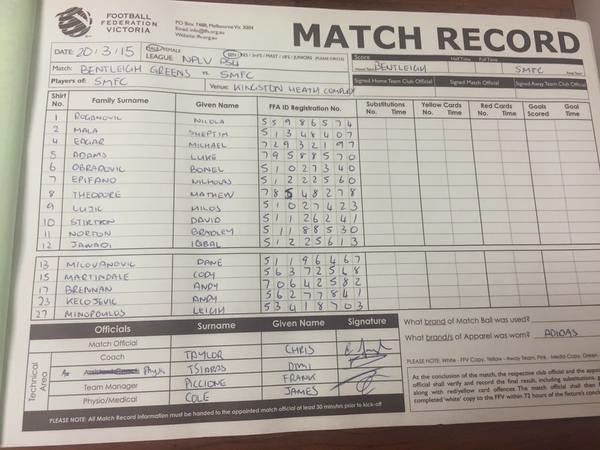 Lead singer: No there's no substitute for you.
Backing singer: No substitute, no substitute!
While it escaped my attention during our last league game away to Werribee, last night while looking at the team sheets on Twitter it became very clear that we did not have a substitute keeper listed. My mind immediately went back to the 2000 Scottish FA Cup final, where Aberdeen played Rangers, a task made much harder for Aberdeen due to the fact that they had no substitute keeper. Well what do you know, their keeper Jim Leighton went off injured and they had to use one of their outfield players in goal. It didn't turn out so well.

Now when Roganovic went down heavily in the six yard box yesterday, it looked like we were in big, self-inflicted trouble. Now I had overheard that under these quite plainly unacceptable circumstances, Kristian Konstantinidis would be the outfield player to take up the gloves. But of course he's out injured. So what was going to be Plan Z exactly? Poor organisation by the club on all fronts on this matter, thought its comforting to know that we've reverted to our habit of signing 101 midfielders. Luckily Roganovic managed to get up and continue. But speaking of Gonzo...

Kristian Konstantinidis out for season?
It looks like Gonzo's out for the entire season now, or at least a huge chunk of it. Since much of our plan for this year seemed to hinge on Michael Eagar playing a central defensive role, what would be the back up plan if that couldn't be arranged because Eagar needed to played in defence? Perhaps new recruit Dane Milovanovic could fill in that role - but is he even fit? Murmurings around the ground suggest that he is not.

Dockerty Cup opponent
We've been drawn against the plucky cup outfit North Sunshine Eagles. North Sunshine have a habit of punching above their weight in the cup, most recently eliminating Sunshine George Cross on penalties after their game finished 6-6 after extra time - including coming back from 6-4 down with nine men. 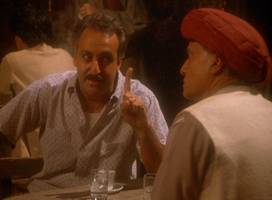 Hey Martin Foley, where's the social club? (via smfcboard)
"He said the wheels were in motion, but there was no motion. He's a very bad man"

Around the grounds
Three times is a trend
This week was the first game of the league season for the state leagues, and I ventured out to the Paisley Park derby. Neither of these two sides had apparently shown much during the pre-season. Altona East were lucky to avoid relegation last year, thanks to Moreland City accepting promotion to NPL. 2015 hadn't started much better, being bundled out of the Dockerty Cup by lowly Riversdale. For their part, Altona Magic had reportedly recruited heavily with a view to getting into the NPL, only for that door to be shut by the FFV for this year. Magic, too, had been bundled out of the cup by Berwick. The game started in typical derby fashion, with a lot of strong tackling, but eventually Magic went on to take control of the match. That they ended winning this game because of pretty much scoring the same goal three times doesn't reflect well on Altona East. Each time the ball was lofted into the area, each time confusion reigned in the East defence, with the keeper and defenders at sixes and sevens. OK, so the second of the third goals was an own goal, but that was the only outlier. East did pull it back to 2-1 early in the second half, but never really threatened again after that. Echoing last year's 'Robin Egg Blue' fiasco, Ian Syson decided that the colour of Magic's away strip was 'banana yellow' (as in the skin, not the flesh), whereas I argued it was the colour of an egg rich custard. It was that kind of day.

Oh, and my hair has apparently changed colour again. I blame the sun.

Final thought
There was some, er, 'arousal' in among the crowd there last night. Perhaps it's best to leave it at that.
Posted by Paul at 21.3.15