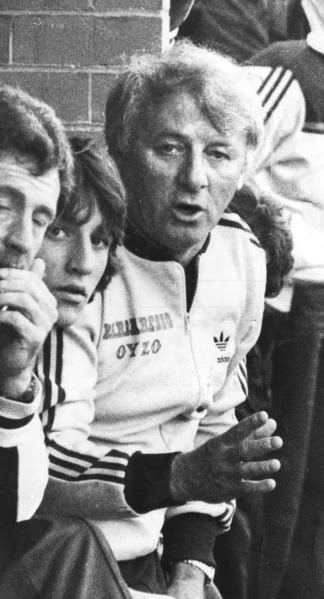 Former South Melbourne Hellas coach Tommy Docherty died on the last day of 2020, and while I don't usually do any sort of deep-dives (or even shallow dives) on the passing of former South people, Docherty's tenure at South has always intrigued me, as does that time in South's history.

I mean, even putting aside the decline of our collective Hellas and general soccer memory, that whole late 1970s and especially early 1980s period - at least the bit prior to Len McKendry turning up and sorting things out - seems to be glossed over by our supporters.

And that's understandable. because unlike our dominant 1970s state league performances, South's first few years in the NSL were hardly a runway success. After all, we did finish last in 1979, and only avoided relegation because of a certain degree of administrative shiftiness, for which Sydney Olympic has never forgiven us.

That loss of collective memory isn't helped by the acute lack of footage from those early NSL years, but that doesn't completely explain why that South era doesn't get remembered as well as other similarly unsuccessful eras. It's not helped either by 95% of our supporter base (give or take one or two percentage points) disappearing into the aether.

Oh, sure, there are moments and players from that era that people like to bring up, like Malcolm 'Supermac' Macdonald's guest stint, and the extended presence up front of former Liverpool star Alun Evans.

But in general it seems to have been a period of time when the club chased a lot of big name players, paid very big transfer fees, and got little reward for these endeavours. When that approach failed, the club continued to repeat the same process while wondering why the team wasn't improving. Stop me if you've heard this story before.

That's certainly a simplistic retelling from someone who wasn't even alive then. Nevertheless, from what I can tell, the signing of Tommy Docherty as South coach midway through 1982 was typical of the club's thinking at the time. Instead of pausing and perhaps trying to figure out the root problem, the committee would invariably try and throw more cash at the problem in the hope that money alone would solve the club's unbefitting lack of success.

Enter Tommy Docherty. The Scotsman was a former player of some accomplishment, and had coached a variety of teams in England, most notably Manchester United - whom he had gotten relegated, then promoted; then won the FA Cup with them in 1977, upsetting Liverpool; and then found himself sacked soon after, when his affair with the wife of United's physiotherapist came to light.

After a couple of short stints at Derby County and Queens Park Rangers, Docherty coached Sydney Olympic in 1981, though he soon returned to the UK to help his former club Preston North End - for whom he had played over 300 games - get out of a relegation scrap. For whatever reason Docherty's coaching stint at Deepdale didn't last, and so he hit the road again looking for new opportunities.

And that's how he ended up back in Australia. Docherty was in the country in May of 1982 to promote a soccer skills program or some such over a five week period. During this time, South approached him to take over the club for those five weeks in his spare time, with an option to coach out the rest of the year.

Despite big spending on numerous "name" players, under incumbent coach John Margaritis, South had played disjointed, inconsistent football, was apparently suffering from poor player morale, and was entrenched in the bottom half of the table midway through the season.

Docherty took over the coaching reigns from round 14 onward, with Margaritis stepping aside from the position of head coach while remaining within the coaching structure; that was an arrangement that would last little more than a few hours, with Margaritis quitting soon after introducing the players to their new coach.

It's a little bit odd to think that a well-credentialed senior coach like Margaritis would agree to such an arrangement in the first place, and sure enough the man himself must have realised quite quickly that it made no sense. Certainly several pundits at the time, including Rale Rasic (who in just a few months' time  would succeed Docherty as South coach), agreed with the unusualness of the affair.

With training at the time only three days a week, Docherty was able to live large to a certain degree, supplementing his soccer income with radio and television appearances, and one also assumes his regular newspaper columns. One report from The Guardian in 2000 suggests he was making more in Australia from his combined coaching and pundit work than he would've made as a manager at a top English club at the time.

Being an affable and gregarious walking quote-machine, Docherty was good for publicity, but it's arguable that he was much good for South on field. Some players, like Charlie Egan, seemed to relish his fellow Scots' style, but other veteran players soon found themselves on the transfer list. And it's not like the team's results improved all that much, although Docherty's preference for attacking football at least probably made things more interesting.

After five weeks of mixed results, Docherty returned to England to take care of pressing legal and financial matters - namely the matter of a court summons over maintenance arrears due to his first wife, Agnes. During that time, Mick Watson acted as caretaker coach. On his return, Docherty coached out the rest of the season, made tentative plans for 1983, but his contract was either not extended or was bought out by Olympic.

And it's his second stint at Olympic which is perhaps his most notable legacy in Australian soccer, as some of their fans tend to give him the credit for building the squad that would go on be a regular competitor for titles in the 1980s.

As for South, even if we don't seem to remember his time here too much, he certainly remembered us. Interviewed on the eve of the South Melbourne vs Manchester United Club World Championship match, Docherty remembered his time at South as requiring more diplomacy in the changerooms than he was accustomed to; he also noted of South's fans that "they were the best winners in the world, and the worst losers"; and that when some supporters threw apples and oranges at him, Docherty would goad those fans by eating the apples and peeling the oranges.

Even a cursory look through the papers of the time (both the mainstream outlets and specialist soccer press like Soccer Action), reveal that Docherty loved football, and was happy to entertain the press and public. In the long-run, South probably would've been better off if he'd taken the job a bit more seriously; still, there's something to be said of his not taking the game and himself too seriously. After all, soccer is a game, and games are meant to be enjoyed, or so I'm told.