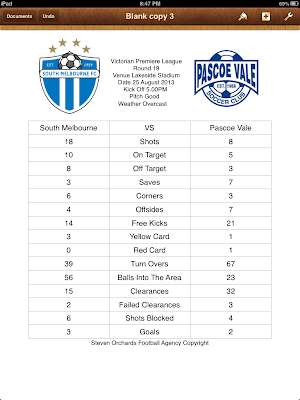 This article is late partly because I went out drinking, in my own very limited way.

I have even less idea than usual of what happened at this game. I mean, you tell me what was going on out there on Sunday evening?

For some reason we played at 5:00 instead of 3:00. Rather than being a cold, windy evening, the weather was unusually pleasant. We came into this game with some sort of form. Several results went our way. And I swear the canteen people also keep changing their kransky supplier, and despite being overpriced at $7.50 (and I swear they used to be $8), they actually have some flavour to them now.

As for the game itself, we got the good start, courtesy of a Nicky Soolsma header, and we must have been thinking to ourselves, OK, good, now to really take these guys to the cleaners. Except Pascoe Vale didn't stack the defence after that shaky start, and decided that they would instead try and win this game.

The first goal we conceded was bad enough, but what happened with the second? Why did Holmes have his arms out so far? Was he calling for offside? Was he playing for a foul? Either way, hands shouldn't be out there, right call was made, and we're 2-1 down. Gavalas isn't the best penalty saver in the world, but he made the right choice this time - but Ferrante's spot kick was well placed.

But at least we went into half time level. After several close calls - including one that hit the back post from long range from Holmes, who just can't take a trick - Luke Hopper continued his rich vein of form, by opening up the angle, shooting, and getting what looked like a deflection past Sardelic in goal.

Speaking of Sardelic, I thought he did quite well for the most part, but my goodness his kicking is still dire, especially his drop punts.

But back to Hopper again, isn't it amazing what happens when you have two up front, so you don't have the situation where a lone forward is swamped by defenders, and they are able to find space to shoot? When was the last time we did that on a consistent basis?

I know I complain about Soolsma not using his left foot, but maybe it doesn't matter if he's going to put in good cross after good cross with his right foot. For our third and decisive goal, he destroyed the Pascoe Vale defender with his fancy footwork, even though surely everyone knew where Soolsma wanted go, before putting the cross right on top of Rixon's head, the latter guiding it home for his sixth of the season.

But again, credit to the visitors who kept coming, who unfortunately just couldn't beat the offside trap. Except for that time where they did, courtesy of a howler of a non-call from the assistant referee on the far side, when it seemed completely obvious that the Pascoe Vale player was at least five metres offside RIGHT IN FRONT OF SAID LINESPERSON.

Apart from some desperate, clumsy, awkward defending from our end - which for the most part looked less desperate, clumsy and awkward than the last few weeks, though that's not necessarily saying much - I felt Pascoe Vale's best chance would come from a free kick near goal, with Michael Ferrante alway a dangerous proposition from that range. He got one shot at it, but sent the shot just wide, and I think we all breathed a little easier after that.

Chris Taylor seems to really hate making substitutions, Only one was made yesterday, Kearney on for Holmes, and that was very late on in proceedings. Usually a coach will make at least a couple, and with enough time for them to make an impact. Gus Tsolakis often his subs way too late for my lining, while Johnny A's were so predictable that they showed no initiative. Taylor either doesn't trust his bench, or doesn't see the need to change what he sees as his preferred starting eleven unless absolutely necessary.

The refereeing started off poor and went downhill from there. We probably copped the rough end of the stick for the most part, but Brian Bran may be counting himself lucky after an incident in the six yard box towards the end of the game. Our (and Trent's) old friend Milardovic got sent off late, not quite sure what for.

So, without wanting to look too far ahead into the future, here's where we are at. We're still nine points behind first placed Northcote, so I guess we can rule out reaching their mark. We're six points (and two goals) behind second placed Melbourne Knights, who we play this week. We're two points behind third placed Port Melbourne (level on goal difference), so the double chance is still well in play. We're level on points with fourth placed Bentleigh Greens, (but five goals behind).

We're three points ahead of sixth placed Green Gully, who still have a game in hand. And we're also three points ahead of Hume City, who have an atrocious goal difference. Even with their game in hand each, you can probably discount Oakleigh and Dandenong from the finals race, even though they are still a mathematical possibility of making it - but they're both seven points outside the five at the moment.

So, how many points do we need to make the finals? Double chance? All that will become much clearer after this week, as apart from our game, Port hosts Bentleigh on Friday night. Three wins I reckon will get us the double chance. Two wins and a draw should get us into finals. Two wins and a loss and you're dealing with goal difference. Anything less than that and you're seriously playing with fire.

Lastly, it was also good to meet several and new old faces again. Met Lefteri the security guard from Greece. Met another old bloke at the tram stop, who was also wondering why Elias Donoudis won't call us Hellas any more. Also caught up with Bill Vandermey, and finally met Jake as well, who missed the game through injury. 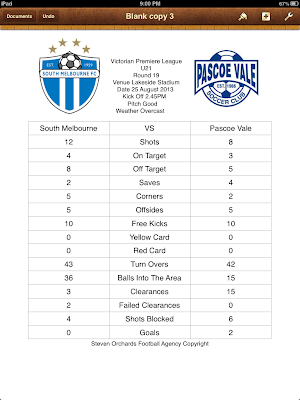 Steve From Broady's Under 21s Report
South Melbourne's under 21s took on Pascoe Vale at Lakeside Stadium on Sunday afternoon, at the later kick off time of 2.45PM. South kicked off and the first half was extremely uneventful with both teams making no real chances (what about when Pascoe Vale hit the crossbar? Ed.). The teams went into the half time break locked at 0-0. The second half kicked off and it took 20 minutes for the game to kick into gear when Pascoe Vale played a long ball into the area, it giving them the first real chance of the game. There was a massive scramble outside the six yard box and the Pascoe Vale number 11 managed to put the ball past three defenders on the line and the keeper to give the visitors a 1-0 lead 65 minutes in. South struggled to get into gear for the rest of the game. and three minutes from time Pascoe Vale's number 11 popped up again to score a standard goal firing past the keeper from close range to put South out of there misery. 2-0 to Pascoe Vale it finished. South Melbourne's under 21s miserable season rolls on, away to Melbourne Knights next week, hopefully we can snatch a win against our old rivals.

Steve From Broady's Canteen Report
I was at the South food van for the second last time on Sunday. It was quite an excellent souv I indulged in, and I had an epic bottle of h2o. I give South's food van a 9 out of 10 for this week. Can they crack the perfect 10 on the last home game of the season? Until then, get around it!!!!!

Around the Grounds
Altona East vs Moreland City was our non-South soccer outlet this week. Moreland dominated the opening half, should have been two or three up at halftime, even with the disallowed goal. Second half much more even contest. Moreland had another goal disallowed, squandered several chances, but credit to East who overcame their first half malaise and scored the only goal of this contest.

For the record, the souv was freaken awesome. That'll teach Steve from Broady to stay home to watch the Wallabies lose, WHICH IS EXACTLY WHAT I'D TOLD HIM WOULD HAPPEN. Some kind of seer I am predicting that result, eh?

I Re-Tweet, Therefore I Am
Congratulations to Steve from Broady who finally learned how to retweet on Twitter. You can follow him at @stevorch.

NPLV Latest
Would have loved to be in the courtroom to see this part of the action kick off, but alas, a different kind of duty called. We tried to line up a guest court reporter appearance from one of our readers, but sadly we couldn't make it work. According to 'Mahony' on the 442 forums, next court date is September 23, a week before the successful NPLV bids are announced.

Next Week
Knights away.