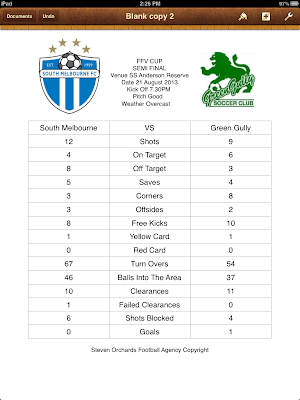 Without the vast majority of our recent signings, this Dockerty Cup semi final was always going to be a bit of an uphill battle. But at the same time, this was an opportunity not just to continue our recent good form, but also an opportunity for some of those players who have fallen out of favour, or those who are on the margins of first team selection, to put their hand up and say 'Chris Taylor, look at me, I can do a job for you'.

So while there was perhaps an air of inevitability about the result - especially when we went into half time level, as I had the feeling that the longer the game went on, the more likely it was Gully who would score - it was extremely disappointing to see the performances of some of these players on the outer, for various reasons.

Chris Maynard aside, who had a good game and kept us in the tie with some good saves, the rest underperformed. Rhys Meredith got plenty of the ball, but often found himself snookered into the left hand corner, without much support it must be noted. Tyson Holmes hustles and bustles, but continues to struggle for touch at the moment.

Youngster Andrew Cartanos was poor, not only when he had the ball, but also for his efforts off the ball. While he certainly impressed against Preston, there's a difference in taking on a 10 man State League 2 side, and a well drilled VPL team like Green Gully - and hopefully he sees this game as a massive learning opportunity, as well as a guide to what it takes to be a VPL starter.

Fernando got on for the last 25 minutes, but tightly marked, he was largely ineffective. The decision to go for a short corner late in the game was extraordinary. It's a pity, because this may well be the last time we see him in a South shirt. Here's hoping I'm wrong, and there's still another opportunity for this champion to show us his mettle.

But these fringe players weren't alone. We were weak on the left hand side again, though Osagie Ederaro also made himself a real pest on our right hand side as well. When Nicky Soolsma decides to attempt the occasional left foot shot or cross, defenders will be stumped. Gains and I are certain that his left footed shot in the first half of this contest was the first time he's used that side since he started his South stint. He didn't attempt any others.

Of course, it could have just been a bad day at the office - and we may well see these players again soon enough, if or when injuries or suspensions take their toll. And it was good to see Trent Rixon get another 90 minutes under his belt, though disappointing to see him required to collect balls in the middle of the park and even on the right hand side, miles away from where he should be.

So on to focusing solely on the league, where it's become clear there are no easy game any more, as if any team decides to rock up with the right mentality, they are in with a shot regardless of how far gone their season is.

After the failure to snare all three points against Pascoe Vale last time, playing with a man advantage for eighty minutes, the hope is that this week it'll be different is strong. The team has been bolstered, the mentality around the place seems different, and we'll be playing them on our turf, a lush, green and wide open spaces, instead of the cramped, bumpy pitch we played that 0-0 draw so long ago.

Three points here are a must, of course, because apart from not wanting to drop more points against a bottom three, out of finals side - and we've already dropped six points to such teams - we need to keep up momentum, keep up our home form, and give ourselves as much of a boost or buffer as possible heading into the final three matches, all against finals aspirants, two of which are away, and apart from the cup heroics against Northcote, none of which we have beaten this season.

So all the best to the team as they begin the first leg of this massive month of football. Please also note the 5PM kickoff time.
Posted by Paul at 23.8.13