Another loss, another kick in the teeth. Play this while you read on.

ACMI Knights Supporter
Wild scenes before the game. Met Steve from Broady at Flinders Street, and to kill some time, we went across the road to ACMI so I could buy some tickets for MIAF. One of the blokes at the ticket booth recognised our South gear, and started chatting with us about the glory days... of 2005/06.

Contender for almost goal of the year
One of the Trifiros went up half the field, took on and beat about half of the Bentleigh team, slid his shot across the face of goal, only to see it hit the inside post and roll agonisingly along the line or some such.

Did our heads drop after that? That might be a retrospective opinion to take. Suffice to say that, apart from a Trent Rixon header which he should have scored (cue the 'he would have scored that against us last year' comment), we didn't really look like scoring

Gains
Back in the country, and yet our fortunes didn't change. Even microwaved murtabak couldn't make a difference.

Handball
I was at the complete opposite end of the ground, so I was in the absolute worst positio to see if it was a good call. If it wasn't, well that obviously blows, if it was, well, where have all these calls been during the rest of the season? Where was the handball for us late in the game?

That it was the only time that the Greens hit the target in the match made it hurt that little bit more.

Joe Montemurro
Now, I like the guy, he always has time for a chat. But I'm not convinced he should be anywhere near the senior team, if only for the facts that a) his senior record is actually rubbish and b) he has been one of the few common denominators in the last 2.5 seasons of bollocks performances.

Killing this club
These performances are killing the club. They are sucking the very air out of our lungs.

Semi-random people are coming up to me and asking just what the hell is going on. South fans and rival fans are equally bemused (and occasionally amused) by the goings on.

I can't give them a definitive answer. I wish I could provide something so erudite, that not only will it cut through the matter in one fell swoop, but that I could take it to the dressing rooms and write that sentence in giant letters onto their whiteboard.

But the problems are so diverse and now so deep, and the transfer window is still not open for another couple of weeks, that realistically, what could you say?

The Dandenong draw should have been a turning point, a hard fought result from which we could begin to relaunch our season. Instead we are going backwards at a rate of knots.

Kyle Joryeff is just about the door, and maybe three others, though I would be loathe to speculate as to who, though Marinos Gasparis is a frequent suspect.

Joryeff has been enthusiastic, but his time on the park has been limited. And when he has been given extra time he, like many others, has not put in the performances that have been required.

Gasparis seems unfit. He should be the player driving the team forward, bossing the midfield, but it's just not happening. It shows just how much we miss both Carl Recchia and Daniel Vasilevski.

This is not to romanticise the recent past. Vasilevski, apart from being injury prone, could often go missing in games. But there was a certain forward progress and directness, maybe even an 'x-factor' that they provided. Not having (an ageing) Fernando doesn't help matters either, nor does Joe Keenan's continued absences help - especially when Brad Norton is often the direct replacement.

Every man and his dog reckons Andy Vlahos is a done deal. Despite his age, if he could pull out his form of last year, where I had him as my player of the year, it would go some way to turning our fortunes around. But he has spent much of the season injured as well.

Thunder's McIlroy was touted as a target, seeing as how he'd been on the bench for much of the season. But he played yesterday and scored as well.

I think that the team is hurting, but it's not the right kind of hurt. It's mostly an introspective hurt, it's being turned inward. What we need is an outward expression of that hurt, preferably with increased effort on the field.

Mazenod United Dog Man
Poor bloke, wearing some flashy Mazenod United merch wasn't allowed into the ground with his dog. He did manage to get in somehow at one point, but that stay didn't last long.

Next Week
Bergers at home, in a relegation dogfight. Didn't think I'd be saying that at the start of the year. But that's where we are, and it sucks balls.

Tom Matthews, by Cindy Nitsos
Because we need at least a token photo of the night's proceedings. 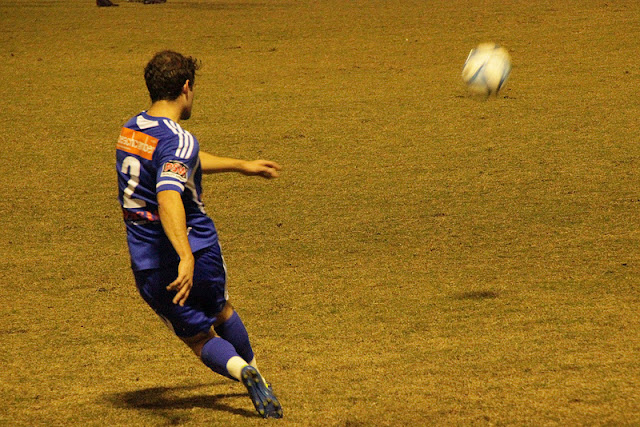 Under 21s
Could only manage a 0-0 draw. They looked like they dominated the portion of the game that I saw (the last 20 minutes or so), and even converted a penalty, but they were forced to retake it due to supposed encroachment.

What was more interesting was a couple of the more disgraceful refereeing decisions seen in this or any other season. Firstly, with the ball heading out, but not yet over the line, the Bentleigh player decided to grab it prematurely so as to get quick thrown going. The ball was still clearly in play, the linesman a mere ten metres away refused to see it.

The second one was worse. South had a free kick about five to ten metres outside the box, and towards the left wing. One South player cheekily nudged the ball - and yes it did go a full revolution, which is a dumb rule anyway - and his teammate knocked it forward a little, then sent in a cross to an unmarked player in the box. The ref not only called the play back, thinking that there was no full revolution of the ball, but also awarded the freekick to Bentleigh from the same spot. Surely South have been asked to retake it? Can any of our referee readers help?

Zenith
At least Juniper Hill won in our opening game of the new Hattrick season. Yay.
Posted by Paul at 17.6.12