Where have the years gone? artefact Wednesday 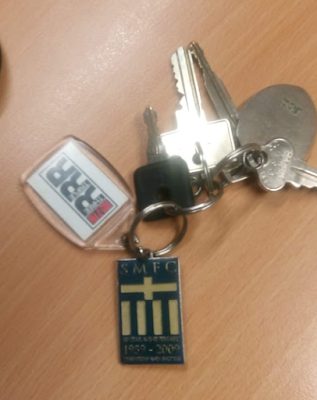 Seasons change, time passes by, as the weeks become the months, become the years...

Thanks to the blog, I can account for a good deal of where I've been for the last eleven years, but before that it all becomes a bit of a blur.

Now imagine if you had to do that for 30, 40, or even 50 years? Is there anyone still at South Melbourne who's been around for all sixty years of the club's existence? Someone who got off the boat when they were 15 or 20 years old perhaps?

Anyway, yes, that is a discoloured 50th anniversary key ring, and yes that is also a 3RRR key ring, though I listen to PBS much more these days.

But as we wait and see what new anniversary paraphernalia gets put out by the club this year, others out there of course have access to older anniversary mementos, which they've shared online.

My 40 year anniversary @smfc key ring has seen better days, but like my club we continue to survive over the many years despite the adversity we face. #60yearsnowbutalwaysandforeverSMFC pic.twitter.com/VLpkA5iGjE
— Est1959 (@Est1959) January 26, 2019

Well, John, a good deal of those years have gone on supporting a team through thick and thin, in stadium and paddock, for better or worse...can you imagine if this club lasts another ten years? I shudder to think of the possibility.
Posted by Paul at 30.1.19