2018 Annual General Meeting announced
Late as per usual. The club put a notice up on its website. You may have received an email. I'm not sure if the club sends out letters anymore for this kind of thing. If you haven't received due notification and you think that you should have, I'd get on to the club pretty quickly if I were you.

Anyway, both the South Melbourne Hellas and South Melbourne FC AGMs have been set down for Thursday January 31st, in the social club. The SMH one starts at 6:00PM, and the SMFC one at 8:00PM.

For whatever it's worth, I agree with those sentiments, not least because the current logo looks dated, but more so for the fact that it doesn't really say anything. Of course those hoping to make a variant of this logo our new logo must understand that its very clear references to our Greek heritage make that idea very difficult to pursue at this time. 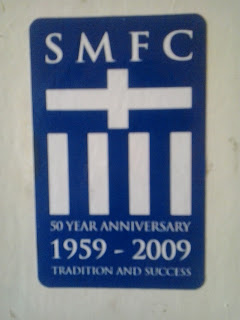 As with the example of the 50th anniversary commemorative logo (see right), this logo is probably a) a co-logo, not a replacement one and b) almost certainly done with the cooperation of Football Victoria to get around certain 'issues' to do with the National Club Identity Policy - issues which would likely be more difficult to deal with were we to decide
to make it our permanent logo.

Still, let's be happy that it looks good, and let's hope too that it won't be the only thing done by the club to commemorate our 60th anniversary.

2019 SMFC senior squad roster as of 05/01/2019
There was a rumour that Ndumba Makeche had joined Penang in Malaysia. Wherever he ends up, it's pretty certain that he won't be at South this year.