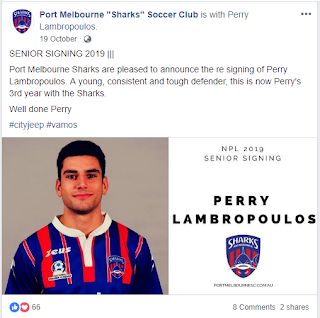 Another quick update on what's being going on at South over the past week.

We've signed players! The new signings include Perry Lambropoulos (see right), a right-back from Poet Melbourne, and who had re-signed at Port and had been announced as doing so as recently as a month ago. That probably shows you how much these signing announcements are worth. Lambropoulos had previously played for Oakleigh, including against us in the 2016 grand final if memory serves me correctly, and even if two of the three goals we scored came from his right -hand side, we must remain optimistic and believe that Perry will at least be an improvement on an end-of-the-road Tim Mala.

As noted last week, we've also signed young winger Gerrie Sylaidos, who had been at the recently relegated to NPL2 Northcote. Sylaidos was reputedly being chased hard by a number of teams. so it's nice to snare a promising talent like Gerrie.

There had been talk of the club making a signing from the NSW NPL, and this has turned out to be midfielder Dean Bereveskos from Bonnyrigg White Eagles. I'd asked my NSW #sokkahtwitter folk for some intel on Bereveskos, and Tony Tannous supplied the following.

Had a very good 2017 at Hakoah, but didn't quite work out as hoped after a hyped move to BWE, who were relegated. Wasn't always fit. More an 8 that likes to break & get fwd than a 10. Talented, good technically, consistency the key
— Tony Tannous (@TonyTannousTRBA) November 16, 2018

They say more signings could be announced this week, but we'll see.

On the departure, front, apart from losing Milos Lujic, we've also parted with Matthew Foschini by mutual agreement (some say he had two more years on his contract). Like Lujic and Nick Epifano (via North Sunshine), Foschini has also joined Oakleigh, where Chris Taylor and co seem to be trying to get the band back together (minus Andy Brennan, who's shipped off to Green Gully), but being South Junior/South 2.0/Diet South has been part of Oakleigh's program for over a decade now.

Oh, and it also appears that Nick Marinos, the coach of our best youth team (the 2018 under 16s) is now the under 20s coach at Port Melbourne.

The list below is an unscientific attempt to corral where we're at this particular moment with our senior men's squad.

If you know your history episode 2
Yes, they let us make another one.

‘If You Know Your History’ episode 2 on @FNR_Radio, where @IanSyson and I talk about rationales - my doctoral success - Harold C. Wells and The Earth Cries Out - soccer literature - missing trophies and memorabilia - 100 years ago today https://t.co/GhPcnatMah
— Paul Mavroudis (@PaulMavroudis) November 19, 2018