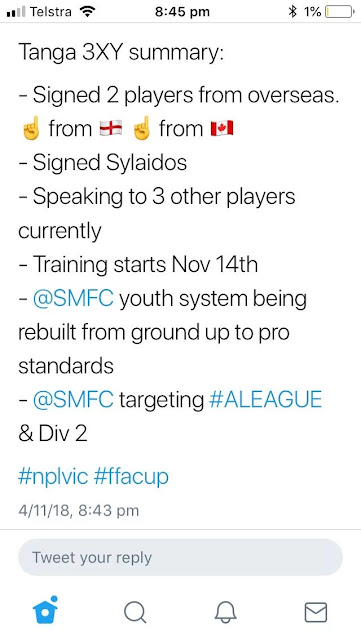 Not much going on at the moment, but it's up to you to decide if that's any cause for alarm. Maybe they're trying to keep it all hush-hush so other teams don't come in and swoop on recruits.

With other teams making announcements on signings, it's natural to get antsy about what it is we're doing or not doing, especially since a player like Oakleigh's Dusan Bosnjak - someone who, even if there was no firm intel that he was heading our way, would still seem like a good fit, and thus his eventual whereabouts the natural preserve of rumourmongers - has signed at Altona Magic. So it goes.

Last week Con Tangalakis was on 3XY Radio Hellas' sports program last week, but I only found this out later, via the South forum, where someone posted a screengrab of a tweet that had been sent to his phone by someone else, with the original tweet coming from SMFCMike. So thanks to Mike for listening and providing the summary, while some of us were listening to jazz noodling on community radio.

So that's Gerrie Sylaidos, and two visa players. Meanwhile, another person has said that we have signed a defender. So, not up to the bare minimum of the seven players required to start a match, but we're getting there.

Of more genuine concern is that when the 2019 fixture gets released, we'll have another ridiculous run of away games to start the season, followed by an equally ridiculous run of home games. So that's something to look forward to.
Posted by Paul at 10.11.18