Where was the kaboom? There was meant to be an earth shattering kaboom!
Like an apocalyptic cult waiting for doomsday, we reached the hour of judgement and... nothing happened. How do we go on with our lives under such conditions? Well, like any good cult with a failed doomsday prediction, we'll reconvene and let everyone know of our revised date at some future point of time.

More seriously, the transition from one FFA board and Congress model to another was always likely to cause issues. The current board of FFA, which has been treading water since Steven Lowy succeeded his father - and which cobbled together a half-hearted expansion process that neither they nor the current A-League teams really wanted - has failed to deliver an outcome to its own purported deadline.

These things happen. And what's more, if we are to believe certain media platforms, there are ongoing concerns about the viability of all six final bidders. Well, duh! I said the same thing when there were three times as many bidders; that there was no magic bullet Wanderers-style bid which would solve (or at least alleviate) the persistent issue of stagnant A-League metrics, while also not requiring new stadiums, suffering from uncertain investment streams, or significantly cannibalising the fan-bases of existing franchises.

The more conspiracy minded of you will no doubt gravitate towards the theory that despite its obvious drawbacks and deficiencies, South is probably the only ready-to-go franchise of the remaining bids, but that there's no way that the authorities or whoever succeeds would let that happen. And I'm not here to disabuse you of that belief; after all, since the only way I could ever see South returning to the Australian top-flight is via an extraordinary case of last resort default. I can't entirely deride a line of thought which bears some relation to the way that I think about these things.

Anyway, even if we kept the receipt, it's not like we're (or whichever director was responsible) going to get our application fee back. We're just going to have be a bit more patent as this farcical process extends into the indeterminate distant future. Not that any of that matters, even if it is frustrating.

Of course there is always that second division and promotion/relegation idea
And if you're interested in such shenanigans, then the AAFC have a treat for you. They'll be hosting a forum for potential candidates for the chairpersonship of FFA. Register here if you'd like to go, though I think Football Nation Radio may cover it as well. I'd like to say I'd be there, but I may be otherwise occupied.

But back to more important things
Con Tangalakis' appointment as senior men's coach is finally official. Now that it's official, what can we say about such an appointment? Purely on a surface level, both on the appointment itself and the way it happened, it seemed like Tangalakis was not our board's first option.

Whether Bentleigh coach John Anastasiadis was serious about considering our offer to him, or whether he was merely stringing us along, there was an offer made from us to him - and it didn't work. Whether the club had anyone else in mind, I do not know. Whether anyone else would've been interested is also a question that you'd hope would be answered in the affirmative, but it could be that we are seen as a basket-case not worth bothering with, a condition working in tandem with free-agents of any worth being vacuumed up by cashed-up clubs.

When combined with scandalous rumours and articles about our perilous cash-flow situation, and 2018's unceasing aura of senior squad disharmony, things aren't exactly looking chipper. Anyway, pre-season training starts in a couple of weeks - or so some of the forum people say - and it'll be interesting to see which players actually turn up. Speaking of which...

Farewell Milos Lujic
It was a fait accompli, some would say from months ago, but it's now official: Milos Lujic has departed the club. Five times our leading scorer, even in 2018 when his commitment levels (and the service to him) wasn't at its best. That's going to be a huge gap to fill, but it probably won't be the only one.

And just in case some of you were holding out hope...
Former skipper Michael Eagar has re-signed at Port Melbourne for 2019. So we're not getting him back. 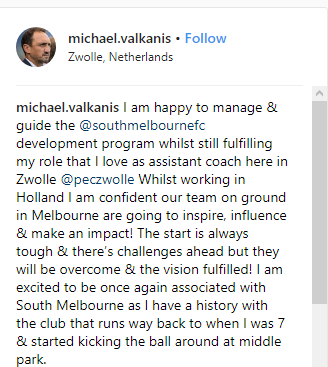 From a distance, the world looks blue and green (and the snow capped mountains, white)
Mike Valkanis has been appointed as "Head of Football Development", which seems an odd thing to do for someone who fairly recently decamped for The Netherlands to work in football there. So is Mike coming back? Er, not quite.

While the reaction from our own fans on social media was one of unbridled enthusiasm for having a sort of favourite son "come home", the supporters of Dutch club PEC Zwollw - where Valkanis is currently employed in some sort of assistant role - certainly seemed to be confused by the situation.

Valkanis himself clarified that he would, in fact, be remaining in The Netherlands while delegating day-to-day operations to other people. How all that will work is a question best left to those who have made the decision and those tasked with making it work.

Besides, as long as the stream of players from Queensland to Victoria doesn't stop, do we even need juniors anyway? I mean, apart from fulfilling our duties under the NPL licence agreement?

South Radio to return in 2019?
Heard some talk that there's a chance of a South Melbourne Hellas radio show returning to the digital airwaves in 2019. If it happened, it'd be via Football Nation Radio, who are trying to fill out their programing with club specific shows. Not sure if we're likely to take up the offer, though I believe other clubs are keen to grasp the opportunity.

Haven't done this in a while
Match programs! Well, one South one, and one Queensland one. The South one is from our ill-fated first attempt at the FFA Cup national stage - ie, the Palm Beach game. The other is from 2017 NPL Queensland grand final. Many thanks to Garry McKenzie for sending these our way.

I've put the call out Knights fans for what South of the Border is missing in terms of Knights vs South match programs from 2005 onward... we'll see what happens. I'm more hopeful of getting match programs involving South Melbourne and Newcastle's various NSL representatives, though we'll all have to be very patient with those.
Posted by Paul at 1.11.18