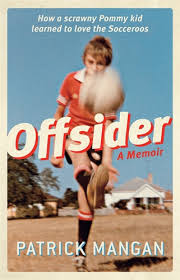 I really should have got around to reviewing this years ago, when I first read it, but having re-read it on the bus back from Canberra recently, it seems like as good as time as any to finally get a post up about it.

Mangan was a soccer journalist back in the 1990s (at this point in, while he's still in the writing/editing/publishing game, I don't think he's in soccer any longer), but this book is mostly about everything that happened before that. While Mangan does detail some of his experiences as a soccer journo, mostly working on the old Soccer Australia magazine, most of this book is centred on Mangan's childhood and adolescence as an English immigrant Arsenal fan shunted to rural Victoria.

Think about that for a minute - you're a kid who's just got the taste for football and the Arsenal in the early 1970s, living just minutes from Highbury, and all of a sudden you're in Swan Hill. Much of the book's charm then is in how Mangan and his brother John concoct ways of keeping in touch with Arsenal and soccer more generally, from Swan Hill to Horsham to Ballarat.

From week old screenings of English football on television to three month old copies of Shoot! magazine, Patrick and John are nothing if not resourceful and determined to keep up with football. The most interesting part of these efforts were the attempts to create little handmade zines, which were even used to spread the love of soccer to classmates. Mangan's family and close circle become evangelists for the game, even (re-)introducing a soccer club to Horsham

Offsider is an usual book not just for its setting, but because of its source. It's not about a famous player, it's not about an official or backroom shenanigans and political turmoil - it's the story of what it was like to follow soccer in rural Victoria, in the pre-digital age. Calling Offsider an outback Fever Pitch does neither book any favours. While part of the narrative core is the same - the travails of following a largely mediocre Arsenal in the 1970s and 80s - the tone of Offsider is entirely different. The style is genial and charming. There is angst there, sure, of adjusting to a new country, a new culture, and leaving everything familiar behind, but nothing too severe. Though the book occasionally digresses into the 1990s and early 2000s, it does something unusual for an Australian soccer book published post-2005 (it was published in 2010) - it doesn't go into any detail on the post-NSL era of the game. To be fair, while this is an entirely within its thematic remit, it's reassuring that the book doesn't feel it needs to go there at all.

I feel (with likely little supporting evidence, but that's the thing about feelings as opposed to evidence) that there is perhaps a tendency in Australian soccer writing and historiography to go for the big picture at the expense of the particular and individual, when the experience of the game is too fractured for those takes. Where we should be going then I think, is in focusing on smaller, more targeted works like this - the net effect then would be to create a mosaic of experiences and interpretations. More works like Offsider, which are aware of their distance from the centre of power, and that the game is not just about close proximity to power and influence, are an important part of Australian soccer's story.

For South Melbourne Hellas fans, the book contains a couple of neat moments - a section dedicated to the day Malcolm MacDonald played against St George at Middle Park, and a photograph of British comedian Frank Skinner with a Lakers scarf. Otherwise, this is recommended reading for material for any Australian soccer fan, and especially those who support Arsenal.
Posted by Paul at 5.12.15