Well, that was a pleasant experience in all sorts of strange ways. Watching the rain start to come down and the lightning strike in the vicinity of Knights Stadium as I drove east along Ballarat Road, it felt good to be heading back to something resembling serious soccer. No need to pay for parking also added that little bit of extra value, though I probably should ducked into the NPL Victoria season launch being held inside the Melbourne Croatia social club adjacent to the ground - if only to add a bi more colour.

I had my umbrella with me, but the rain was that heavy and persistent, and it was only a pre-season affair after all, that I ended up staying in the stand for the whole game, copping cigarette smoke wherever I sat, Bad eye sight and increasingly decrepit short term memory meant that I spent a good bit of the game trying to figure out who some of the players were, especially that skinny looking number seven with the dyed blonde hair - oh, wait, it's Nick Epifano.

No difficulty picking out the goalkeeper at our end, since despite being the better side throughout the first half, and spurning several chances, we went into half time 1-0 down after Knights scored from a corner which Gavalas failed to get to despite it being in the six yard box.

But immaculately taken photos don't tell the whole story of course - it was an excellent corner from the Knights, but the knee jerk reaction from me and some others around me was to blame Gavalas and pine for the days of [insert last decent keeper you think we had and/or Chris Maynard]. I admit that I'm not a Gavalas fan, and that I was probably too strident last night, but when later that night Chris May came out confidently and punched a ball well clear, 'give Pete a chance' ran a clear second to instinctive malevolence - and that's taking into account Gavalas very good diving save from a long range free kick in the second half.

The game wore on, and while one doesn't ever knowingly or willingly discount the chance of an equaliser, time was running out, though we were getting closer. There are certainly games I've seen where we've looked a lot less likely to score a goal. Considering Gains had written us off - for shame, Gains, for saying that we wouldn't score - it was especially pleasing that Andy Brennan of all people popped up with the equaliser, taking advantage of a corner ending up at the back post for him to score with his first touch.

Leigh Minopoulos' winner in injury time, averting the skipping of extra time and straight to penalty shoot out scenario that was set to settle the game, was both an encouraging moment for the team itself in running out the game in the way that we did, but also a sign of the depth we have on hand, This depth may cause its own problems down the line - injuries and suspensions aside, Taylor tends to like putting out the same starting eleven if things are going well - some players are going to be spending a bit of time on the pine this season.

While it'd be stupid to extrapolate a whole season's eventualities based on one game - and a game played in atrocious weather, before the real stuff has started, and before anyone's settle down at that - there were signs of why I think we'll both win the championship again, as well as reasons why we'll fail to do so.

Going forward, aside from the poor finishing, we looked damn good, perhaps better than at any moment I care to think of during 2014. Some of the one-twos, the turns, and the way the forwards seemed to be in synch with each other was very encouraging. We also moved the ball forward quickly, without resorting to long balls; though Chris Taylor seemed to have a different opinion, remarking to the media after the game that he thought we were too direct - and who would have thought Taylor would ever say something like that?

The reasons we could fail to win the title? Complacency, for sure, but the keeping situation is undoubtedly the one everyone is focusing on whether you despise Pete Gavalas or want to him to do well for the simple fact that he's our keeper and that there's no point in trying to destroy our own, when there's already so many others willing to help us along in that regard. More than his failure to get to that corner yesterday - and I think the old adage 'karate yes, or karate no, but never karate guess so' applies for that situation - it was the fact that his defenders clearly weren't on the same page with him on several occasions that is most immediate concern, in this ear when you goalkeeper is meant to be a de facto sweeper.

Whether that was down to a newly re-jigged defence still finding its bearings - it was interesting for example to see Michael Eagar in a defensive midfield role, where the New Zealand soccer fans are more accustomed to seeing him - or due to the weather, you hope that it will be gone soon, because we've already been through this. The opposition, too, was not at full strength, and they too showed signs that they'll need to settle - and while I wish it was league match we'd just won, rather than a pre-season ceremonial shield, I'm still happy to have won said shield as opposed to meaningless scratch match.


Welcome aboard more new faces
We've copped a little bit of stick for going all gung-ho with our recruiting so soon after a championship. Never mind that we've lost a few players, and that our best kids have been taken by the A-League NPL teams (not that we would have probably used them anyway, but it did happen), it's also part of our well established culture to snare talent from wherever we can, and damn the consequences.

To that end aside from the signing of Peter Gavalas, we've also signed midfielder Cody Martindale (who? exactly) from State League 1 outfit Noble Park; and Kristian 'Gonzo the Great' Konstantinidis (need more Greeks!) from Northcote City, another player who's had a run in with our supporters, I think that feud stemming from some idiocy during our ill-fated 2013 preliminary finals attempt.

Steven, I like your hustle. [Steven smiles]. That's why it was so hard to cut you.
It's farewell to the other of our two championship year goalkeepers, Chris Maynard, who has been let go. There had been consistent chatter about his tendency to miss training, but once he won the number one spot, it seems the fact that he turned up to pre-season training 10 kilos heavier - and remember how it was mentioned at the AGM that we're keeping track of all these things now - didn't help his cause any which way The talk is that Nikola Roganovic will be the number two to Peter Gavalas. Both have spent a bit of time out of the game, and Gavalas of course has all sorts of baggage brings with them (already LOLing it up on Facebook), so it'll be very, very interesting to see how this plays out.

Maynard has since ended up signing for Heidelberg. Let's hope this gamble pays off for us. Rightly or not, many of us have doubts, perhaps magnified further by the fact that even last year the keeping situation was always seen as a weak point. [cliché alert] Only time will tell.

Next week
The official start of our title defence, against perennial bridesmaids Oakleigh Cannons. It's our only home league fixture until April. It sucks that it will be on a Thursday night, which sucks, but welcome to the concept of the marquee opening fixture, which because it went so well last year, will be tried again in 2015. I suppose we should be glad that we're handpicked for these occasions.

Memberships/Negative Nancy persona ditched for one paragraph at least
For those of you who have pre-purchased memberships - good on ya, and if you haven't, head here - then they will be available for collection as per usual outside the gate before our first home game.

Seriously - buy a membership, come to games, be part of the solution, not part of the problem. It's been ten years - get over the fact that we're still in the second tier, and remember that it's still the same club. Don't listen to the naysayers and the excuse makers - it's still South Melbourne, it's still Hellas, in blue and white. Come watch a team that looks like it will have a decent chance to defend its title. Never mind the running track - it's still among the best stadiums in the state, and it's not like you haven't watched sport from distances further away and in lesser comfort than what you get at Lakeside. 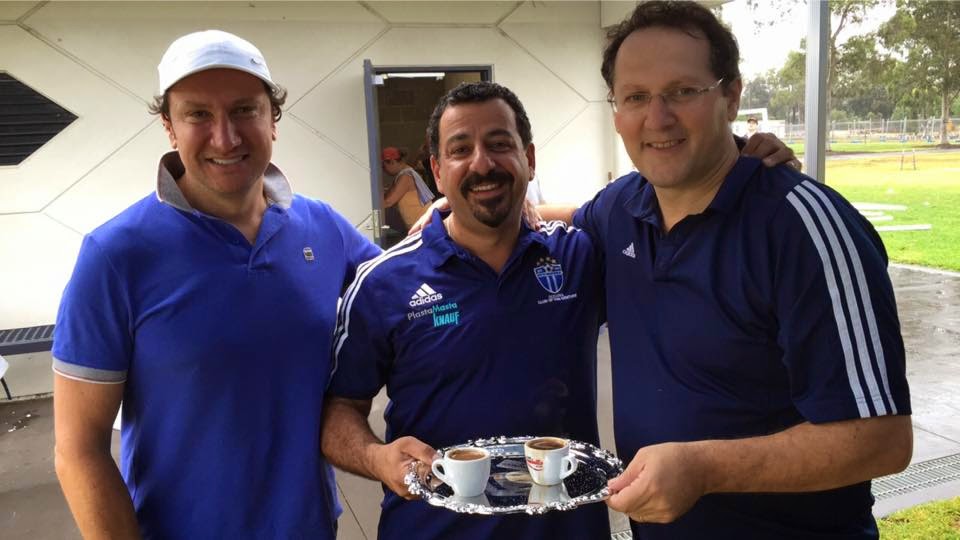